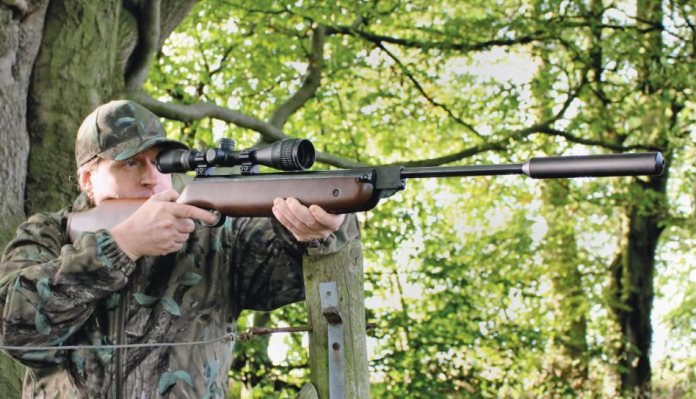 When I first began shooting air rifles, you could count on one hand the rifles youngsters, like myself, aspired to own. We didn’t have the comprehensive selection that’s available today and we certainly couldn’t afford a PCP. It might sound bizarre, but back then, one of the air rifles to own was the Weihrauch HW80 and/or the HW80K.

Back in the day, custom gunsmiths like Venom chose this rifle and other Weihrauchs, like the HW77/77K, to tune and modify until quite frankly, they became for that era - superguns.

The HW80/80K is a classic and a legendary springer that was once thought to be the ultimate air rifle for knocking down live quarry. Its appeal was boosted by it once being advertised as ‘The Powerhouse.’ In actuality, it wasn’t any more powerful than any other good quality 12 ft/lbs legal limit air rifle available at the time, but it lived up to its other reported attributes of being very robust, reliable and in the right hands, accurate.

Since its launch, this airgun has only had a few slight changes, mainly to the stock, which was given a ‘Monte Carlo’ style cheek piece. However, when Weihrauch developed their topperforming ‘HE’ (High Efficiency) sound moderator for their very first multishot PCP, the uber-popular HW100, we saw some of their popular mechanical models having their barrel’s screw cut and being offered with the company’s silencer already screwed on up-front.

Most I’ve previously tested, so which model is still high on the list in relation to popularity? Well, the HW95KS and HW90S are sure-fire contenders for those looking to hunt with a mechanical action air rifle.
But for classic rifle status and sheer pedigree, the HW80K with a silencer or as it’s now termed the ‘HW80KS’, is still one that can’t and shouldn’t be ignored.

The ambidextrous, dark brown stained beech wood stock is now far sleeker in profile than the original and that once high cheekpiece has also now been altered. The stock now sports a full, yet medium height cheekpiece with a brown rubber butt pad and black line spacer. It’s worth mentioning that like many Weihrauchs, the configuration of the aft section is designed in a way that the butt sits wonderfully well in the shoulder, so no worries over shoulder fit or (for the average person) reach to pull. However, aftermarket setback trigger blades are readily available from various sources if required, so even this is a nuance that can be personalised to the shooter’s personal preference.

The pistol grip has also been modified, feeling less ‘deep’ than its predecessors and it’s also acquired a shallower rake. A design some will appreciate but I feel equally as many, especially those such as myself who have had experience of older models of ‘80’, will find a tad unusual but not impossible to quickly get used to.

Deep-cut chequering is now applied to the grip. There are two large panels set on either side and while the relatively lengthy slab-sided forend still retains a nicely curved underside, it’s still bereft of any such grip aid. I mention this because the HW99S now has chequering on the forend, so I found this omission a tad strange. However, during testing, I didn’t feel the stock lacking in this department because it handles and balances so well that you’re not continually searching for a sure leading handhold. Also, as it weighs in at a healthy 8.9lbs un-scoped, with the weight being felt slightly more towards the forward section of the stock, this also helps the rifle feel more secure in your leading hand.

Unlike the standard and carbine variants, the HW80KS omits open sights. Now, you might think someone such as me who’s been brought up shooting open sighted air rifles would be the first to criticise the rifle for this but it’s not an issue. The reason being, you can purchase the other versions of the rifle. Also, Weihrauch has developed an ‘HE’ silencer that’s specifically designed to fit the HW77 and 77K model as an optional extra without affecting the sightline of the rifle’s ‘irons’.

Although the barrel has been shortened to 12.2” (approximately 2” less than the carbine variant) with the added length of the silencer it’s still rather lengthy. However, the silencer doubles up as a useful cocking aid and the rifle unlatches at the breech very easily, plus doesn’t take as much ‘heft’ to cock due to the extra leverage the silencer offers. Not wanting to overly dwell on length, due to the silencer being quite long, the rifle has an overall length of 44.8”, so it’s definitely what you’d term an adultsized air rifle. However, when suitably scoped up it doesn’t feel unwieldy in the hold as an appropriate optic brings the weight back towards the shooter and is felt in a more central position.

At the end of the cocking stroke, you can feel the quality of the German engineering as the trigger sears engage very positively and the familiar automatic safety button pops out from the rear/left of the air cylinder.

The breech uses a large, wedgeshaped détente lock and chunky breech seal to ensure an airtight lockup once you’ve thumbed a pellet directly into the breech and returned the barrel to the closed position.

Incidentally, as there’s no antibeartrap mechanism, it can be decocked if required by simply pushing the safety button in while holding the barrel in the cocked position, then squeeze the trigger and allow the barrel to return (under control of your hold) to the closed position.

This scope-only rifle has quite a lengthy run of deep, well-cut dovetails, with the addition of three arrestor holes to prevent scope creep. Now, it was while scoping up that I became aware of the change in height of the cheekpiece. The reason being, I initially fitted a scope with a 50mm objective lens in high mounts, and to obtain correct eye-scope alignment my head was just touching the top of the comb.

To combat this I fitted a sensibly sized, general specced scope in medium height mounts. This suited the rifle and made the combo feel far more comfortable in the aim. After setting a 25 yard zero, I was soon printing 5/8” groups. Pushing out to 35 yards, the rifle was still capable of making kill-zone size groupings using quality ammo.

Obviously, the legendary Rekord trigger unit aids accuracy. It’s a 2-stage, fully adjustable mechanism that is still classed by many as the industry standard by which other similar trigger mechanisms for a springer are judged. The nicely curved steel blade is ridged at the front to give a more positive trigger feel and releases shot after shot without a hint of creep.

Recoil is certainly lower than on older models and is felt as a slight nudge in the shoulder. There’s some internal mechanical noise on discharge but the company’s HE silencer does a fine job of reducing the muzzle report.

There’s now a very wide selection of springers available with integral silencers fitted and equally as many available with standard ½” UNF screw cut muzzles to accept a can of choice. So, although one of the main selling points of the HW80KS is the addition of the HE Silencer, it has to be remembered the rifle’s proven pedigree comes from being a rugged, reliable, nononsense sporter, plus its inherent high level of accuracy. The stock is another feature that deserves praise as the rifle feels better in the hold than the early models.

I think some will feel Weihrauch could have shortened the barrel far more than they have, especially as the trend is now leaning towards shorter air rifles. It would give it a more general appeal as well as help with handling characteristics and of course the ability to use it in enclosed areas. It would also enhance the overall ergonomics of the gun, which for some would be a deal-breaker. But that’s for others to consider as the Weihrauch HW80KS is a solid, robust rifle based on a layout that’s more than stood the test of time, and with the addition of such a highly effective silencer, it’s definitely a man-size springer that shouldn’t be overlooked by the airgun hunter who prefers the traditional.