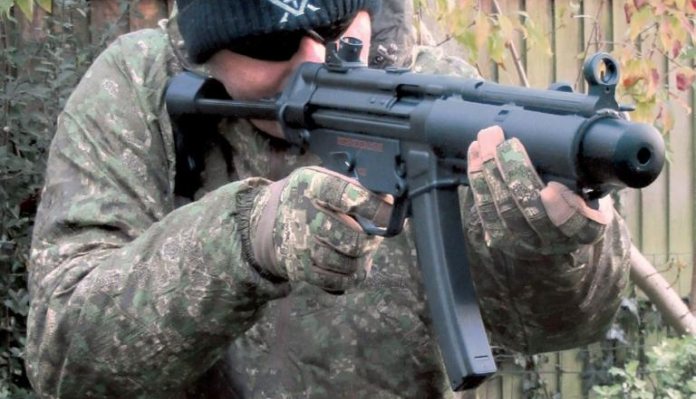 The word ‘iconic’ is much overused and abused in my mind, but when it comes to submachine guns then there is one model that is truly worthy of the icon spot, and that’s the Maschinenpistole 5 from the mighty Heckler & Koch.

From humble beginnings back in the 60s the MP5 has seen action with elite units around the globe, and recent (sad) pictures still show it proudly in service with UK police units; for a design that is now fast approaching 60-years old that’s quite some going, and that’s why I believe one deserves a place in every self-respecting airsofters armoury!

I’ve had an MP5 all through my time playing airsoft, and even my first served me very well indeed, although somewhat bizarrely my MP5s do have a habit of getting sold and replaced at regular intervals when new AEG or gas technology comes along! After numerous electric versions I finally ended up with a gasser, but as much as I really enjoyed playing with the GBB version I hankered after a gas AK, so the MP5 went… again!

My mate, James, though got a super deal with a railed Marui SD6 version at one of the airsoft boot fairs a short while back, and this rekindled my passion for the little SMG, but to date I’ve (if you’ll pardon me!) held fire on buying another until I found exactly what I wanted as this sadly will probably be the last MP5 I buy… I am knocking on a bit you know!

But what makes me so truly passionate about the MP5? For me it’s a no brainer is that it has been used by military and police forces worldwide, has appeared in the hands of most screen action heroes and of course was the firearm carried by the SAS when they stormed the Iranian Embassy. It’s been used by the USN SEAL Teams, GSG-9 and virtually every special operations unit in the western world, and even today we see the MP5 in the hands of our firearms trained police officers! Although it’s a design that has been around for many, many years it’s still one that is current.

I say that the MP5 has been with us for a while, and if you delve into your history books it was WAY back in the mid-1960s that Heckler and Koch looked at the successful G3 rifle designs, and then adapted things so make use of the 9x19mm Parabellum pistol cartridge. The MP5 was created within this group of firearms and was initially known as the HK54. First created in 1964, the H&K MP5 was developed as a pistolcalibre, blowback operated roller-locked member of the H&K weapons system, and in 1966 it was officially adopted by the German Federal Police, border guard and army special forces.

In repeated and exhaustive testing, the MP5 has proven capable of firing more than 30,000 rounds without a single stoppage or parts failure and it is not uncommon to find MP5’s still serving with in excess of 500,000 rounds through the original barrel and receiver!

Still regarded of as one of the most reliable and effective submachine guns in the world the MP5 has become the choice of the worlds’ most famous elite anti-terrorist, special operations and special law enforcement organisations. While more modern submachine guns have been designed since the introduction of the MP5 it is still the one that many professional users turn to when reliability and unceasing functionality are required.

BOLT Airsoft are getting an increasingly good rep with players at all levels as they specialise in a patented electric blow-back (EBB) system for many of their rifles and SMGs; they aim to provide AEGs with a powerful recoil movement able to be used even with lower voltage batteries. BOLT Airsoft’s goal is to design AEGs as close to the real deal to satisfy airsoft players along with military collectors.

The BOLT Recoil Shock System (BRSS) produces kinetic energy from the gearbox and transfers that energy down through the receiver and into the main body. In addition to the recoil system, BOLT also greatly reinforces the gearbox and the rest of the internals to withstand the powerful recoil shock and to enhance the rifles durability and performance; BRSS is now a tried and tested system, that I’ve experienced in a number of their models and I’ve been very pleased with them all, and the system does ensure you get a nice little kick in the shoulder when you fire it!

MP you can trust

When the test sample of the MP5 arrived with me from distributors NUPROL I was immediately impressed at how sturdy it felt; the real MP5 weighs in at 2.54kg and the replica comes in at 3kg, the slight additional weight being down to internal parts that don’t need to be there in the real world and the BRSS itself.

With solid stamped steel bodywork, and one of the sturdiest sliding stocks I’ve come across on an airsoft MP5 to it arrives beautifully presented. The BOLT MP5 features a stubby integrated alloy suppressor (the full-length version is also available), as well as an alloy 20mm rail on the underside of the handguard for the attachment of foregrips and other accessories SEAL-style. The MP5 is front wired and has a Mini Tamiya connector in the handguard, which is easily accessed by unscrewing the integrated suppressor; I love this feature as other MP5s I’ve had in the past need you to remove either the handguard pin or a pair of retaining clips to access the battery compartment, and from experience these are easily lost! The hop unit is adjusted by a slider-type adjuster, easily accessed by pulling back on the charging handle which will lock to the rear to make it easier. Do avoid the MP5 slap though, as although this part is solid, it will no doubt break if abused!

I’ve always found that a good MP5, even with a short inner barrel, can be really accurate, and it’s one of the reasons why I rate them so much. With the 200BB magazine filled it was time to set the hop and have at it! Like all MP5s the BOLT has the usual pictogram fire selector, and this locks into mode with a satisfying click; with semi engaged the BOLT went off with a crack and a healthy nudge in the shoulder, sending BBs straight downrange to target at 30m. Using .20g RZR BBs the BOLT delivered a consistent chrono reading bang on 1.0-Joule/329fps which is absolutely perfect for use on all sites in the UK.

With an asking price iro £380 this is definitely heading towards the top-end for AEG territory, but in my opinion it offers superb value for money given the performance! I do really like the little MP5 as a model, and this one sings to me not only for the quality of materials and construction, the BRSS, but even the little rail under the handguard; BOLT have done their homework in order to produce something unique.

As I said earlier, the time is approaching when my choice of RIF to buy is governed not so much by money, but by the fact that my playing days may not be so frequent as they once were. To this end I’m being a bit canny over what I buy, but I’ll tell you now that the BOLT MP5 is most definitely going to be on that list!

My thanks got to NUPROL for the loan of the test sample. Expect to see more BOLT Airsoft models in all good airsoft retailers soon!model from ICS is thoroughly worth a look. If like me you fancy owning something to really fit with a bad guy loadout then the ICS PM-2 is essentially a must-have!

For more information on the PM-2 please visit icsbb.com, and my thanks as always go to fire-support.co.uk who stock the full range of ICS goodies!