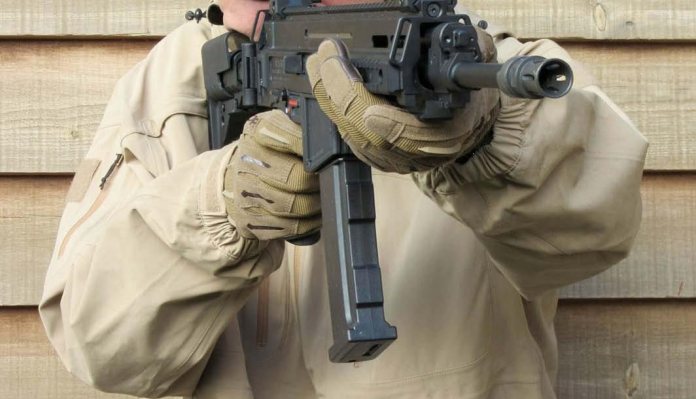 ActionSportGames (ASG) are one of those quiet ‘just get it done’ companies in the airsoft manufacturing industry, and for the last couple of years they’ve really been teasing us with their latest collaboration with Česká zbrojovka Uherský Brod (CZ), the fully licenced CZ 805 BREN.

I first saw things taking shape on the new model at IWA 2015, and at that stage it was already looking very good. ASG like to take their time in relation to development though, only fully releasing a new model when they are 100% happy that it’s as good as it possibly can be; looking at past performance they did exactly the same with the CZ EVO and the SP-01 and both have turned out to be great, beautifully crafted replicas with superb performance and durability, and I for one haven’t heard anybody complaining about either.

The fact that a manufacturer takes time to get things right from the get go can only be a good thing for all of us; how often have we seen a RIF rushed to market because it’s right on the current trend and been disappointed due to sub-par performance and a lack of reliability? Over the years, I’ve seen this just too many times, and although today things are much, much better there’s still always the possibility of a ‘lemon’. At IWA this year, I saw from one manufacturer several AEG models that were “ready for release right now” and they’ve only just now reached the market, as design faults were discovered post-production!

I’d much rather have a RIF that’s gone through all the checks and balances, thorough torture-testing, design and re-design, and a carefully controlled manufacturing process before I part with any cash. I also like a properly licenced replica, as I know then what I’m getting is going to be as close to the ‘real deal’ as possible, and ASG are past masters at conforming to all of the aforementioned processes. Has the build-up to the release of the BREN been just hot air though, or is it the RIF we’ve all been eagerly anticipating?

Czechoslovakia was unique during the Cold War for being the only Warsaw Pact member whose army did not issue a rifle based on the Soviet AK-47/AKM. Instead, they ploughed their own furrow and developed the Sa vz58 in the late 1950s; although it fired the same 7.62x39mm cartridge and externally looked similar to the AK, its operating system and features were dramatically different to its Soviet sibling. It was effective at the time it was introduced, but by the next decade had already become obsolete. In 1977 a program to create a new rifle started but it was not until 1984 that a new design was approved. Named the ‘Lada’, it fired the smaller 5.45x39mm cartridge and could fill three roles; a sub carbine with a 185mm (7.3-inch) barrel; a rifle with a 382mm (15.0-inch) barrel; and a light support weapon with a 577mm (22.7-inch) barrel. All three variants followed the family of AK-74 rifles and mostly took after their designs except for differences in the receiver cover, sights, and safety selector. The weapon was first manufactured in late 1985, testing started in 1986, and it was approved for full production in November 1989.

With the end of the Cold War however, by the time it was declared fit for production, the Army had no funds. The country itself was splitting apart, and on 1 January 1993 it separated into the Czech Republic and Slovakia, ending 74-years of the country of Czechoslovakia. In the late 1990s, the Lada project was restarted with the prospect of the Czech Republic becoming a full member of NATO. For the domestic Army Replacement Rifle Program, the Lada was re-designated Project 805, and design work for the assault rifle began in 2006. With the prospect that the Army would re-arm gradually rather than on a large scale, CZ drew up entirely new specifications in late 2005. Project 805 became the CZ XX, and then the CZ S805. It wasn’t until November 2009 that the Czech Army finally released a tender for a new infantry rifle, and CZ were ready to pounce!

The company reduced its modularity for the competition and submitted a 5.56mm rifle (A1) and 5.56mm carbine (A2), as well as similarly configured 7.62 Sovietchambered variants. This was eventually reduced to just the 5.56mm system. When the tender was released, 27 weapons were submitted, but this soon reduced to just the CZ 805 and FN SCAR-L. The CZ 805 won narrowly due to the emphasis on a domestic design and the result was made public on 1 February 2010. A production contract issued to the famous Czech arms factory CZ-UB in the city of Uhersky Brod. CZ 805 rifles were also offered for export, either in military (select-fire) or in civilian (semi-automatic only CZ-805 S1) versions. The first delivery of the CZ 805 was on 19th July 2011 and consisted of 505 guns and 20 grenade launchers. The initial order was completed in 2013.

The CZ 805, which is called the ‘CZ 805 BREN A1’ in Czech sources, is a modular, multi-calibre design, with an aluminium alloy upper receiver and polymer lower receiver/fire control unit. The magazine housing is a separate detachable unit, which can be replaced in the field as part of a calibre change. The weapon is gas-operated and features a rotating bolt and a manual gas regulator. The CZ 805 also features quickchange barrels, allowing users to change calibres and barrel lengths according to the mission profile. There are short ‘carbine’, intermediate ‘standard’, long ‘marksman’ and heavy ‘squad automatic’ barrels available in each calibre. The fire control unit includes an ambidextrous safety/fire selector switch, which permits single shots, two-round bursts and full automatic fire. The charging handle can also be installed on either side of the weapon, depending on user preferences. In standard configuration, the CZ 805 will use proprietary 5.56x45 calibre 30-round magazines made of translucent polymer. Other magazine housings will allow use of STANAG or HK G36 5.56mm magazines, as well as various 7.62x39 and 6.8x43 magazines.

The BREN is fitted with integral Picatinny rail on the top of receiver, with additional rails running on the sides and the bottom of the forend. The rifle is issued with folding ‘iron’ sights, and will also accept a wide variety of additional sighting equipment (red-dot or telescopic day sights, night sights, and laser units). The rifle is equipped as standard with side-folding buttstock, which is adjustable for length of pull, and can be completely removed if maximum compactness is required. Additional equipment also includes a new, specially designed 40mm under-barrel grenade launcher, the CZ G 805 and also a new knife-bayonet.

As good as it gets!

So, in the real world CZ, and the Czech Republic, have once again decided to go their own sweet way! Although on the face of it the 805 BREN might be seen as an odd choice for an airsoft replica, given the relationship that ASG have with the venerable firearms manufacturer, and the success that they’ve had with all the other CZ models, perhaps it’s not such a bad bet after all!

And what a superb replica it is. ASG have made the decision to replicate both the A1 rifle and the A2 carbine, and both models are available in black or desert colour schemes, the only real difference being the length of the barrel. Other than this, both have a commonality of parts, starting with a CNC machined aluminium alloy upper receiver and polymer lower.

Both the A1 and A2 versions of the CZ 805 assault rifle are fitted with a CNC machined monolithic integral Picatinny rail on the top of receiver, and additional rails running on the sides and the bottom of the for-end; the side rails can be removed should you so desire, and this then gives the 805 a really slim profile. There’s also a really well-shaped ergonomic pistol grip.

The side-folding buttstock, which features a very nice cheek-riser is adjustable for length of pull, and can be completely removed if you want it really short for CQB environments. Removing the stock, held by one pin, requires no tools and provides extremely easy access to battery compartment and the quick-change spring guide, allowing fast in-the-field spring changes to adjust to field regulations; this is a direct access design and requires only a flat-blade screwdriver to get the job done. Internally there’s a solid V3 gearbox with 7mm bearings, and the 805 also benefits from a non-linear (progressive) spring design, which results in less load on all the internals, and which should add to the longevity of things.

The finish of the 805 is absolutely exemplary, with the metalwork a rich, deep black and the ‘polymer’ parts complement this beautifully. Both models come with removable front and rear folding sights as standard, and just like the real thing, the charging handle and cheek-riser can be relocated for left-handed shooters; all of these adjustments are clearly shown in the full-colour manual that comes in the box.

All-in-all the 805 is a fine looking rifle, and I’m pleased to report that it’s also a real performer! First step was, as always, at the chrono and my particular BREN came in at 1.38-Joule/387fps using .20g BLASTERS, just a touch off the max 1.4-Joule quoted; as a side note I’ve seen some retailers putting the 805 on their websites quoting them as 0.95/320, but I would double check that if you buy one rather than turn up at your local site with your shiny new purchase ‘hot’.

The A1 rifle version I received for testing has a nice long 375mm (14.7-inch) barrel; the outer barrel features a 14mm CCW thread, with a two-piece flash-hider assembly. In addition to the flash-hider proper there’s a separate collar which you can leave it place should you wish to fit a suppressor, and I have to tell you that the ASG ‘Brugger & Thomet’ QD suppressor for 5.56mm NATO rifles looks mighty fine on the 805. I was expecting very good things in relation to accuracy, and yet again I wasn’t to be disappointed. As I was at my local site the weekend before I sat down to write this review, I took the rifle along with me, and with the longer barrel it’s a great woodland tool; with the rotary hop set I was easily sending every shot consistently through the open side window of one of the old ‘junk cars’ at 30-metres using .25g BLASTERS using just the standard folding sights, and I feel that the 805 would handle an even heavier BB still! Running it on an ASG 11.1 LiPo, I got a great ROF on full-auto and an exceptionally quick trigger response on semi too; literally the only thing missing on the replica is the two-round burst function.

One slight disappointment initially though was that ASG told me that they would only be making the 550 BB Hi-Cap proprietary magazine that comes as standard with the 805; this is a great shame as I feel that the 805 would make a superb modern MilSim OPFOR replica, given that it’s not an M4, but that it’s obviously very different from an AK. Thankfully though all hope is not lost, as when I spoke to Paul, UK & Ireland Sales Manager for ASG, he confirmed that at some point in the very near future there will be a STANAG magwell converter for the 805, and if players don’t wish to buy into this, then ASG G36 MidCap magazines also fit the BREN; problem solved!

I have to say that this is every bit the RIF I hoped it would be, and for those of you who have been waiting so patiently, you will not be disappointed; from my modern OPFOR perspective I love it! The CZ 805 BREN is such a stunning RIF. If you fancy something unique, that’s high quality and really delivers on the performance front, then I’d urge you to check out this new model as soon as possible! Expect to pay IRO £320 for the 805 BREN; they are already available in UK stockists.