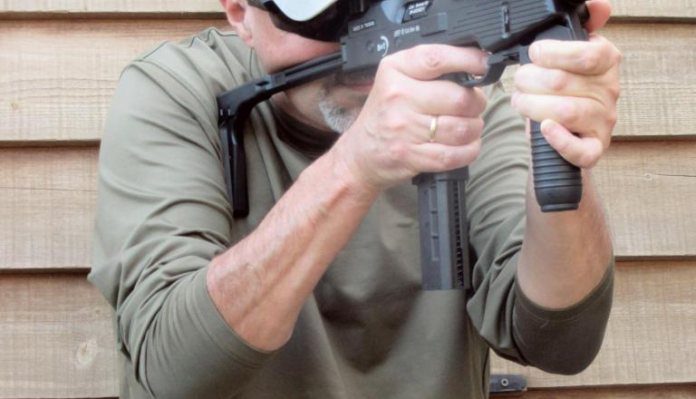 When it comes to fine engineering, you could well say that the Swiss know what they’re on about! Renowned for their fine, elegant and highly intricate timepieces, the Swiss also know a lot about what goes into making cutting edge firearms, with the likes of Swiss Arms (SIG), KRISS, Astra Arms, and RUAG all producing excellent models. Another great Swiss arms manufacturer, who in fairness are better known for their suppressors and accessories, is Brugger & Thomet.

Brugger & Thomet AG (B&T) was founded in Switzerland by Karl Brugger and Heinrich Thomet in 1991 to produce sound suppressors. B&T’s first weapon project was the MP9 submachine gun, an updated variant of the Steyr TMP. The core competence of B&T is the integration of firearms expertise and stateof- the-art engineering into practical solutions for special military and police users.

These engineering standards enable B&T to create and produce the best possible tactical solutions for weapon systems. When B&T started in 1991, suppressors were the first product the company produced and they still do to this day. Users of suppressors very often needed special optical sights on their weapons, so optical sight mounts for tactical weapons soon became a second product line.

To complement this, B&T introduced a line of Tactical Rail Handguards (TRH), thus increasing the modularity of modern firearms, adapting them to accept laser sights, night vision devices, illumination systems, brass catchers and more. Many customers though also came to B&T asking for suitable weapon platforms that were not available from other manufacturers. By the summer of 2004 B&T was starting to produce their own line of complete weapons, the MP9 9mm submachine gun, APR308/338 sniper rifle, GL06 40mm grenade launcher, APC9 submachine gun, APC556/APC300 police carbine, APC223 sporting rifle, SPR300 urban sniping rifle, and even the VP9 veterinarian pistol!

The Brugger & Thomet MP9 submachine gun started its life as the Steyr TMP. The well-known and highly respected Steyr- Mannlicher company developed it in Austria, but Austrian export licensing laws and a lack of sales resulted in the decision by Steyr to drop the TMP from the product line in 2001. At that point, another well-known company, Brugger & Thomet AG of Switzerland, bought all the drawings, patents and rights for the TMP design, and set its team to fully develop the promising design, which resulted in over 19 engineering changes in the product. At the present time, the MP9 (which stands for ‘Machine Pistol 9 millimetre’) is produced and marketed by B&T.

The MP9 is an interesting weapon, offering a ‘halfway house’ between true ‘machine pistols’ and full-size submachine guns. While the former weapons are very compact, their full-auto fire capability is severely limited by high recoil, short barrels and high rates of fire; on the other hand, full-size submachine guns often are too big, especially for close protection teams, police working in plain clothes and entry teams when engaged in room-to-room searches and other such operations in confined spaces. Therefore, the MP9 falls directly in between, being in the same niche as the Ingram MAC-10, H&K MP5K or IMI Mini-UZI. The MP9 offers a lower and thus more controllable rate of fire; the MP9 also features larger magazine capacities, an integral front grip and shoulder stock, and an integrated Picatinny type rail, which can accept a wide variety of sights and other accessories. Compared to full-size submachine guns, the MP9 trades effective range (it has an effective range of about 50-100-meters) for a more compact size and lighter weight, and the ability to be fired single-handedly.

The MP9 is a recoil operated, selective fire weapon, which fires from a closed bolt. It is chambered for the standard 9x 19mm ammunition. The housing is made from lightweight polymer. The MP9 also has new trigger safety, as well as ambidextrous fire mode selector button, located behind the trigger. The ambidextrous cocking handle is located at the rear of the receiver. It does not reciprocate when the weapon is fired. This SMG is fed from 15-, 20-, 25- or 30-round magazines, with the magazine itself located inside the pistol grip. The main improvement of the MP9 over the Steyr TMP is a side-folding stock and the integrated Picatinny-type accessory rail, which accepts a wide variety of sights and other accessories, although it also has adjustable iron sights. This submachine gun is compatible with suppressors, and going right back to their manufacturing roots, B&T offer the QD SMG/ PDW suppressor for it; this suppressor is the perfect addition for the MP9/MP14/ TP9 submachine gun/PDW. Thanks to its QD-lock it can be mounted/dismounted in a matter of seconds, and with a Picatinny rail under the suppressor body, additional lights and lasers can easily be attached.

As well as the MP9, B&T also offer the TP9 is a semi-automatic civilian variant. Its design is similar to the Steyr SPP, but its differential feature is an underbarrel MIL-STD-1913 Picatinny Rail, which is installed in front of the trigger guard, in place of the forward grip. The TP9SF is superficially similar, though it is selectivefire rather than semi-auto only.

I’m going to reiterate a statement I made some time ago. You may have noticed in all the reviews I carry out on replica firearm models that I regularly make use of the words ‘Fully Licenced’, and it’s something that is very important to me. There are many ‘replicas’ out there that may on first glance look like the original that they are designed to resemble, but in many cases, it is just that, a ‘resemblance’ rather than a true reproduction. Whilst this may seem unimportant, in fact it’s a vital part of how the industry works. Development of any firearm takes years, and costs many thousands of pounds, and both aftermarket parts and accessories form yet another part of the process. Trademark infringement is a serious matter, and failing to work with real world firearms manufacturers could see them withdrawing their products altogether from the replica market.

B&T are rightly protective of their reputation, and therefore it comes as no surprise to me that it’s Action Sport Games (ASG) they’ve chosen to grant a licence to; in my opinion ASG are one of the best in the business at getting their licensing agreements right, and ensuring that what we as buyers get is 100% correct, even down to trademarks. ASG aim to give us exactly what we want before, during, and most importantly after, purchase. In relation to the MP9 this means that they have worked hand-in-hand with B&T, even down to using the original design specifications of the ‘real deal’ to provide a replica with a completely authentic look and feel.

Weighing in at just 1725g/3.8lb and at just 305mm/12.2-inches (527mm/21.1-inches with the stock extended) in length the MP9A1 is a right little handful, and beautifully balanced, as all the weight sits around the pistol grip; the alloy bolt and the 48 BB metal magazine account for most of this weight as the body, just like the real thing, is of a reinforced, lightweight fibre polymer. The whole construction of the MP9 is very realistic and it feels extremely durable; it can indeed be field stripped just like the real thing. The cocking handle is functional with a realistic metal bolt. The MP9 has adjustable NS2 hop-up system (a special tool is provided for this, along with very clear adjustment instructions) and both semi and full auto firing mode are easily selected by way of a push-through selector found behind the trigger at the top of the pistol grip; semi or auto can be recognised visually thanks to small ‘dot’ pictograms on the selector itself. There is no manual safety, given the fact that the trigger has an active safety function.

The magazine is quick and easy to load; so once topped up with gas and .20g BLASTER BBs, it was off to the chrono, where the MP9 registered at a healthy 0.99-Joule/328fps; I’ve noticed some retailers quote the power as higher than this so do check for yourself. Next, it was time to reload with .25 BLASTERs and head on out to the 30m range to check performance, and oh boy, is this little SMG a delight in operation!

From a prone, supported position, with the hop dialled in, and with the stock extended and locked solidly in place, at 10-metres I was easily able to hit old plastic BB bottles each and every time (nothing goes to waste on my range!) using just the open sights. Taking that out, I was still achieving good hits on sandbag targets at the end of the range consistently. Cranking up to full-auto sent BBs downrange with some gusto, and it was easy to achieve three-round bursts, thanks to a nicely balanced trigger and with the standard foregrip offering great stability.

Of course, I couldn’t resist the urge to close the stock firmly to the right-hand side of the MP9 and give it full ‘gangsta’, could I, and this little mechanical monster in no way disappointed me! I set up a line of plastic bottles between 5- and 10-metres, set the selector to full-auto and one-handedly decimated them in two long bursts; now that is some serious fun!

Overall, I have to say that the MP9 has certainly found a place in my heart, and I really will be disappointed to hand the sample back. If you’re looking for a cracking, compact CQB tool, or an absolutely excellent back-up for a sniper rifle, then I have to recommend this RIF to you. Priced at under £200, it’s a good price for a gasser, although as with all GBBs, buying extra magazines will send this price up. It’s a really solid performer and it appears that ASG have made the most of their licence, yet again.

My thanks go to Fire Support for the loan of the review sample; ASG also produce an MP9 A3 variant with a lower front rail rather than a fixed pistol grip, and both the A1 and A3 are available in Black, Tan, and OD. You can also add a licenced B&T suppressor should you so desire and that makes it a really cool setup. Thoroughly recommended!

Please do go to www.actionsportgames. com and check out the MP9 more, and visit www.fire-support.co.uk to have a look at other great ASG models available from them.