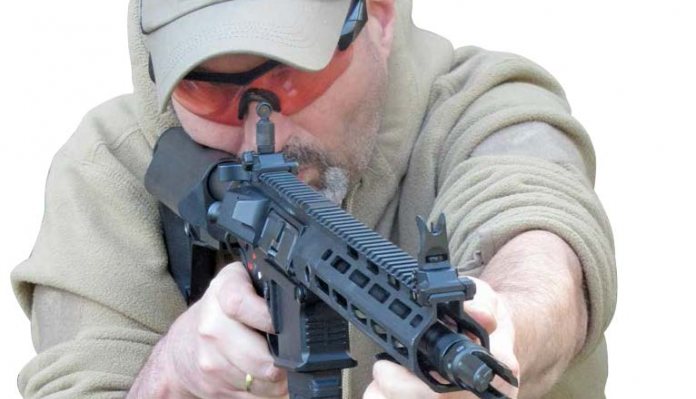 CYMA have been producing AEGs for as long as I can remember and could be rightly classed as one of the industry veterans. If I go back to earlier days, a CYMA was probably the most common rental AEG that you’d find at a site, certainly throughout the UK and even further afield, especially their plastic AK models.

Okay, the original AKs were unashamed clones, and they did have a habit of snapping regularly where the butt meets the body, and they had some problems with the quality control, and some models arrived as new in simply laughable packaging! Although the quality of the old CYMA AEGs could not be compared to more expensive brands the fact of the matter was that they ran like trains (even without the butt!), were easy to work on and upgrade, and above all they were cheap, and I mean dirt cheap!

Over the past few years my personal view on CYMA has changed quite dramatically, as I’ve been hugely impressed with their AK AEGs since they released the 040 series; yes, they still make the old CM.028 series of AKs and they are still cheap as chips (under 80 quid for an AEG!), but for me the 040 series really put them in a very different place. I’ve been using on and off an externally upgraded 077 Antonov AK for a while now, and it’s a super little AEG that often gives rise to comment as it performs beautifully. On the strength of this I got myself an 077A AK (the Magpully one), and then a 040I Tactical model to use as a project base, and these too have been wonderful.

A couple of months back I saw that Taiwangun (TWG) had for sale on their website some really tasty looking new CYMA ARs, and given that I’d been impressed by their latest AK models, I reached out for a CM.097 AR to test, and boy am I glad I did!

I’ve been dealing a bit more recently with the friendly team over at TWG in Poland as they seem to bring in some unusual and interesting airsoft brands including an extensive range of CYMA models, so I asked them if there was a direct collaboration between TWG and CYMA, and they told me:

“The new 097 series of AEGs has been created as the result of a long cooperation and mutual trust between companies which have significant experience in this domain, CYMA and taiwangun.com. These carbines are produced to a different specification; the lower receiver, the upper receiver, the stock tube, the external barrel, the fire selector, the magazine release button, the trigger, the charging handle, and the front and rear sight are made in aluminium, which has made the replica more realistic. Each model even has on the lower receiver a unique serial number”.

There are three variants of the 097 AR, all of which are thoroughly up to the minute in terms of style, the stock model with a 16-inch barrel, the A with a 14.5-inch, and the model I received for testing, the B which is the most compact of the family with a 10.5-inch barrel. All three models otherwise share a commonality of parts which include a precision 6.03mm inner barrel, an alloy M-LOK handguard, alloy A3 flat top upper receiver, and an alloy lower receiver. You get as standard a 6-position magpul-esque stock for large capacity batteries, ergonomic pistol grip, and a really nice 160BB midcap magazine, all in high-standard polymer. There’s also a unique flash hider with a 14mm thread CCW fitting, a metal folding sight set for front and rear, and an ambidextrous sling mount plate. Quite the tidy package!

The 097s in the new E-EDITION and HIGH-SPEED configuration have a velocity of around 360fps as standard (although TWG will downgrade this prior to shipping to the UK if you ask them to!) and claim that in combination with a LiPo battery you’ll be getting a ROF around 25rps and a faster trigger response. After testing I have to agree with this claim, and this seems to be largely down to new gearbox parts with increased durability, such as a reinforced V2 gearbox frame with quick spring change system, a polycarbonate piston with steel teeth, a CNC machined steel gear set (ratio: 13:1), 8mm bearings, a CNC machined aluminium silent cylinder and piston head set (ball bearing piston head, double o-ring cylinder head), and a high-speed motor. There’s even a processor unit with built-in MOSFET system, and audible low battery alerts!

Not just a number

Now in terms of performance I wasn’t sure what to expect straight from the box, but I was genuinely very pleased when I got onto the range. The model I received had been obviously set to 1.07-Joule/340fps, as this remained pretty constant through the chrono. As I’m a midcap player I was delighted with the polymer 160BB model as standard, and this fed flawlessly throughout testing; I did test the CYMA on all my usual AR mags, both STANAG and polys, and I’m also pleased to tell you that these all fed perfectly too. In terms of groupings at 30m prone things were great, and I’m certain this will improve further once the 097 has had time to bed in properly. As I prefer to shoot on semi-auto the ROF, although exactly where claimed, was of little interest to me, but the trigger response is indeed very light and crisp!

It just goes to prove that we really do need to put the past behind us and look at what is in the here and now. Many retailers are getting directly involved in producing AEGs in collaboration with an established OEM, and from what I’m seeing this is a very good thing as the player is getting exactly what they are asking the frontline retailers for. At the end of the day the 097 is a carbine that you can currently buy for well under £200 that looks utterly superb, feels solid as a rock, and is more (way more!) than adequate in terms of performance. If you’re in need of a corking new AR AEG then the CYMA CM.097 models are definitely hidden gems. My thanks go to taiwangun.com for providing the test sample, and please do go and check out what they have available, which is a lot!