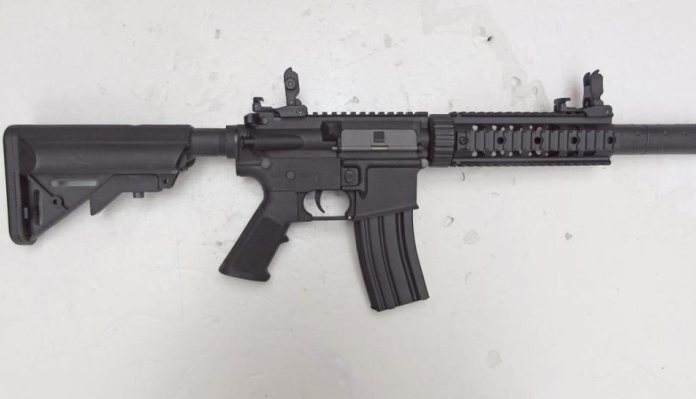 It’s interesting when you look at the UK airsoft market; you may think it’s very small compared to that of the USA, but the fact is that British airsoft players are amongst the most discerning, and many that I know have extensive collections of RIFs from many different manufacturers. You might also think that for a ‘small’ market, another new ‘AR’ offering would just get lost in the mix, but Lancer Tactical hold a big place in the American ‘entry level’ market; so, when their latest models started appearing ‘over here’, I thought I’d best take a look!

Thanks to SMK (sportsmk.co.uk) players can now access the latest Lancer Tactical (all classic black, but the same models are available in Dark Earth) models from their local retailer, and there’s something for everyone to choose from, from an absolutely classic ‘bare bones M4A1’ that would make a great base for a custom build, right up to the ‘Interceptor SPR’, which is as modern-looking as it gets.

Lancer Tactical was established in 2012 to bring affordable, budget-friendly products to airsofters worldwide. Their product line consists of quality automatic electric guns (AEGs), as well as tactical gear used in airsoft, paintball, law enforcement, and military training. They carry a wide range of AEGs featuring polymer construction for beginner airsoft players, to full metal construction variants for MilSim. Some of their AEGs come equipped with blowback ‘recoil’ for enhanced realism.

I spoke to a number of friends in the airsoft industry in the USA and all of them told me that Lancer Tactical have a solid place in the market there, especially with the ‘entry level player’, given their extremely keen pricing (Airsoft GI have a basic ‘Commando Carbine M4’ for just US$99!). Once upon a time, many of us would look upon ‘plastic guns’ with some contempt, but the fact is that modern materials mean that a replica can be as strong as their metal counterpart; in fact, we now see many real firearms, even military models made from plastics and polymers, and the United States Undetectable Firearms Act of 1988 shows that there is even legislation to counter this!

In terms of airsoft, getting yourself out on the field and being competitive does not have to be expensive; whereas in the past it could cost you a lot of wonga to have a half-way decent RIF, tactical gear, eye protection, magazines and BBs, Lancer Tactical now makes it entirely possible to be out and playing for less! Don’t be fooled and let ‘snobbery’ cloud your viewpoint, as just because many of these airsoft replicas have a price tag around the £150 mark, doesn’t mean that they’re not worthy of serious consideration. The Lancer Tactical models are immediately skirmishable and, in the right hands, will hold their own with anything out there.

SMK were kind enough to send me a sample model of the Lancer Tactical Gen 2 M4 SD Carbine to try, and I do have to note that out of the box it did need a little work to get it working correctly, nothing major, but work nonetheless. I spoke to SMK at length about this and they assured me that this was highly unusual and took my comments on board to feed back to Lancer themselves. They also offered to send me another sample, and I’m pleased to report that this turned out to be spot on and functioned perfectly out of the box! To put my mind at rest, I spoke to a few retailers I know, both in the UK and the USA, that stock Lancer Tactical and they all told me that they’d encountered ZERO problems with the models they had in stock or had sold. It would appear that even big companies have the odd ‘Friday Afternoon Special’, but a good retailer will sort any ‘teething problems’ out before you, as a player, even see the RIF in question, so it’s really no biggie.

To preface the RIF in question, a word first on the latest iterations; all the Lancer Tactical Gen 2 series of AEGs are solid, affordable entry level airsoft replicas. They are made with a sturdy, nylon polymer upper and lower receivers and packed to the brim with features to appeal to any airsofter, at a price that is hard to beat!

Coming back to the ‘M4 SD Carbine’, in addition to the polymer body, this features a free-float style fully-railed polymer handguard, which allows you to dress it up with almost any Picatinny-mounted accessory you can dream of, from optics to vertical grips or taclites to lasers. Instead of a ‘standard’ flash hider, this RIF features a slim, recessed mock suppressor to finish off the outer barrel, giving the gun a neat and tidy ‘operator’ look. The included flip up sights make for a fantastic option, to get you in the game straight from the get-go, although I suspect that many of you will pop a mini red-dot on the top and have at it.

Internally, the M4 SD Carbine uses the same solid, workmanlike parts that feature in nearly all the Lancer Tactical Gen 2 series M4 airsoft models but tuned to a lower FPS for players who need to utilise their AEG in a CQB (close quarters battle) situation. These features include a 6.03mm inner barrel, low resistance wiring throughout, a quickchange spring function, rotary hop up, and 8mm bushings to make sure that your gun is firing at a crisp 0.83-Joule/300fps, which is perfect for the UK. The full-metal, version 2 gearbox and 8mm bushings ensure that your BBs line up correctly, causing less stress on the internals. This AEG can be up-tuned to a higher muzzle velocity by simply using a different spring, thanks to the quick-change spring system I mentioned; you can change from CQB to outdoor and back by easily unlocking the mechanism and replacing the spring, without opening up the gearbox.

The included 9.6v ‘nunchuk’ battery (with charger, ditch this!) will keep you in the game for a good while, but personally I’d invest in a good 7.4V LiPo and a quality charger. The battery nestles snugly into the buffer tube, which comes equipped with a sling plate, so that you can carry it with a simple single point sling. The whole package is rounded out by a metal 300 BB high-capacity magazine, which again means that you can get straight out to play a game without having to invest in extra magazines.

So, down to business! The M4 SD works surprisingly well on a 7.4V LiPo, giving a trigger response that is far crisper than you would expect; when you crank things up to an 11.1V, though, the trigger response is great on semi-auto, but I would recommend that you run it on nothing more than a 7.4V as, after all, it is an ‘entry level’ AEG! Chrono testing was carried out using .20g Milbro Tactical Division BBs that were also provided by SMK, and these fed smoothly in testing; the hop-up is easily set, thanks to the rotary design and once set stays where it should. Lancer Tactical (I’m sure thanks to SMK) have looked carefully to legal power levels in all the countries they sell to, so I was not at all surprised when the M4 SD registered a consistent UK limit-friendly 0.84-Joule/302fps. The accuracy was more than acceptable too, given the 10.5-inch outer barrel, with the M4 SD happily spitting BBs out to hit sandbag targets on the 30m range.

All of these features combined make for a neat little package that gets even the entry level or budget minded airsofter onto the field; as much as Lancer Tactical appear to cater more for the newer player, given the light weight of just 4.2lbs/1906g, I can also see these as being ideal for those of a smaller stature, or snipers that want a ‘back up’ that’s not going to add a huge amount to their load.

Whilst the ‘all plastic’ construction might put off some ‘elitists’, I personally think they’re missing a trick with some of the latest releases from the likes of Lancer Tactical, and personally I always get a big smile on my face when my backside gets handed to me by a ‘newbie’ with their ‘entry level AEG’. If it spits BBs, has reasonable range, and is accurate, then any RIF deserves a place on the field; I believe that the new Lancer Tactical models may catch a few ‘seasoned players’ off guard, and that, to me, certainly makes them worth a look when you’re next in your local airsoft shop!

The Lancer Tactical Gen 2 M4 SD Carbine sells for around £150 and is available from most good airsoft retailers. My thanks to SMK for the review model and you can check out the range of Lancer Tactical models they offer by visiting sportsmk.co.uk.