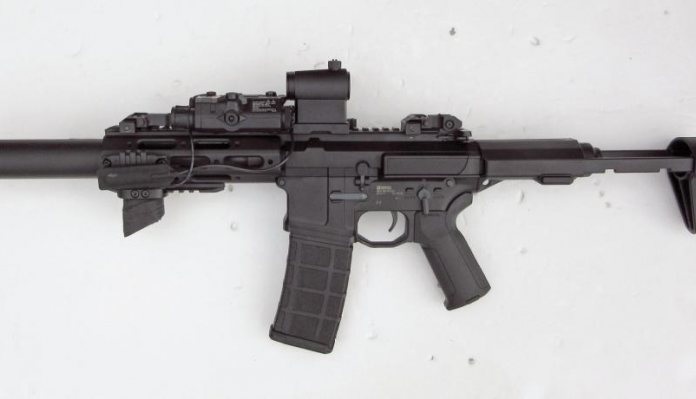 Close Quarter Battle, or CQB as we all call it for ease, is probably one of the most exciting parts of airsoft and at the moment I am seeing a real surge in the number of new sites that are dedicated to this specific part of the game. In a world where there seems to be a “pop-up” for just about everything from music venues to restaurants, airsoft is no different, as switched-on site operators are finding places to play that may really just be ‘oneoffs’ and are all the more exciting for that!

Even when a site is in place for a longer duration, such as TripleA Airsoft CQB that recently opened in my home town of Dover in Kent, the ‘playable area’ can actually be quite tiny and still work stunningly. TripleA is housed on one of the top floors of a multi-storey car park right in the centre of town, and has a playable area of no more than 80mx20m, but movable barriers, props, and even old vans mean that the site can be erected and dismantled easily, and the setup varied from game day to game day; it’s small, intimate, and in your face airsoft, as it should be.

Airsoft CQB is all about moving fast, and whilst the best games are played on semi-auto only (TripleA is strictly semi!), that doesn’t mean that your trigger finger needs to be in any way tardy; although, in my mind, if it’s played right, you’ll also be on realistic loads for both your primary and your secondary, meaning that your ‘drills and skills’ need to be right up there too.

When I play a CQB site, I’m looking to carry a minimal load; all too often, I see players in full ‘battle rattle’, with fully-loaded plate carriers, battle-belts and helmets! I also see them stripping that down as the day progresses and weight and bulk begin to take their toll! Of course, in a man-made ‘urban’ environment, there are many hazards to contend with; so, gloves and kneepads are worth having, and I will admit to wearing a helmet myself in areas where there’s a real ‘bump’ risk. Normally, though, I’m down to minimal, concealable armour carrier, a chest rig, and a pistol belt with holster and dump pouch, and that’s me good to go.

In terms of eyepro, many CQB sites will insist of full-face protection for under-18 players, and I also see a large number of players wearing mesh ‘half-face’ protection to cover their chin, mouth and nose; as I said earlier, airsoft CQB is ‘up close and personal’, so it’s easier to take a BB to the face. Nobody aims for this, but, with your opponent ducking and diving in and out of cover, it’s easy for a BB to hit the head/face area quite unintentionally…

Over the years, I’ve had quite a few ‘CQB-specific’ RIFs for this type of play, and they’ve always been ‘SBRs’. An MP5 or the like is probably still ‘the boss’ in this type of environment, but as the AR/M4 is undoubtedly the most commonly seen airsoft model, something that will make use of the magazines and accessories already ‘n hand’ is always desirable!

When I build a new RIF, I go through a process much like anyone that’s building a new firearm; I think about its intended use, what I want from it, what the base model will be, and what accessories I will add to give the optimal performance I desire. Usually, I trawl through my old reference books for inspiration, but I also look to the real world, to check out trends and projects that might be useful.

In this instance, I was looking for a AR/ SBR that was small and easy to manipulate, but offered me a platform on which to mount an optic, taclite, and even a ‘PEQ’ unit, so that I could utilise both red laser and an IR designator if I chose to use Night Vision gear (with the likes of Scott Country offering this at GREAT prices, this is easier and more affordable than it’s ever been!).

My research led me to the Advanced Armament Corporation (AAC) ‘Honey Badger’. Like its namesake, the ‘Honey Badger’ was, and is a right mean little beastie. AAC’s initial business was designing and manufacturing sound suppressors, and founder Kevin Brittingham was interested in a new round that would be extremely quiet from even a short barrel, suppressed AR, but one that was still reasonably powerful and accurate. Taking notes from earlier work on .30 calibre rounds for suppressed weapons, AAC’s Research and Development Director Robert Silvers led the project that ultimately turned out the new cartridges; the .300 Blackout.

In its 2012 briefing, the company unveiled what it called the ‘Low Visibility Carbine’, which also had the nickname ‘Honey Badger’. At six-pounds and just over 24-inches overall with a compact suppressor and the stock stowed away, it offered what numerous special operations units wanted.

And the ‘Honey Badger’, firing subsonic ammunition, “is as quiet as an MP5-SD, but with 3x the range,” one of the AAC presentation slides declared. Heckler and Koch’s iconic integrally suppressed 9mm submachine gun is famously quiet, but in tests, the new .300 Blackout rounds retained power and accuracy as the test weapons got shorter and shorter. According to a 2012 AAC presentation, an AR-15 in .300 Blackout with a 9-inch barrel produced the same muzzle energy as a 5.56mm M4A1 carbine with its 14.5-inch barrel. However, the bullet was flying 400 feet per second slower in that instance, highlighting that the ammunition might be best suited to the PDW role or other shorter-range combat.

Sadly, AAC never produced the ‘Honey Badger’ in any meaningful fashion, deciding instead to concentrate on their core suppressor business, and the slack was taken up by the likes of the SIG MCX.

In their collaborations with some of the best innovators and manufacturers in airsoft, one of NUPROL’s early projects was to take the original ‘Honey Badger’ produced by ARES and tweak it to actually give it the performance that it had always promised.

Both in real and airsoft form, the ‘Honey Badger’ is a striking firearm, obviously ‘AR’ in its heritage, but taking that forward into new territory. Several variants were produced, but all benefitted from angular yet striking design, and incorporated a sliding ‘PDW’ stock; it also happened to feature in the ‘Call of Duty’ video game franchise, which of course made it even more popular with airsofters! NUPROL took a good design and made it into a GREAT one! Created by ARES but refined by NUPROL as the DELTA SPECOPS, the ‘new’ version is externally made from a high-strength polymer, with an alloy modular handguard, outer barrel and mock suppressor. The package comes with flip-up iron-sights as standard, a set of modular rails for the handguard, and that unique sliding stock. It also features an ambidextrous fire selector and an improved ergonomic pistol grip. Internally, you get an electronic trigger, a quick-change spring system, silver wiring, a high torque flat motor and a solid radial hop-up unit. It’s a solid AEG that is now skirmishable out of the box, chronos happily at 1.01-Joule/330fps on a RZR .20g BB, and for me was the ideal base for what I wanted to create.

NUPROL now offer a huge range of accessories; so, I was able to keep things ‘in house’ (and of course covered by their warranty!) when it came to the ‘bolt-ons’. TripleA Airsoft CQB is a low-light environment even on the brightest day, so a ‘white light’ was a must for searching out those dark corners, so I added an NX600L CREE LED flashlight to the rail. As I said earlier I had in my mind using NVGs at some point, so I also added a NPQ15 Light/Laser Box’ which offers CREE LED white light, a red laser pointer and an IR designator; the white light function will be filtered to red for low light work.

In terms of an optic, I only need something small and neat, so the NP Point E1 RDS Sight is ideal, especially as it comes with both high and low mounting options as standard, and I knew I’d be needing the high option, so it wasn’t blocked by the NPQ15 unit; I also wanted it to co-witness with the flip-ups just in case. The last addition was a super-short foregrip of my own specification; both the NX600L and the NPQ15 are slaved to ‘rat tails’ with pressure switches, and the foregrip helps to index those easily, even in pitch-black conditions.

With the ‘SPEC-OPS’ put together just the way I liked it, there was still an ‘itch’ lurking! I decided that I really wanted a tracer unit, to literally ‘light things up’ and the one drawback with the stock ‘SPEC-OPS’ is that the inner barrel runs the whole length of the mock suppressor. Whilst this is great for accuracy’ it limits what you can attach to the muzzle; it still may get an aftermarket ‘tracer hop unit’ at some point, but’ me being me’ I decided just to build the same AEG again, but this time different!

To achieve this, I took the full-metal NUPROL ‘FREEDOM FIGHTER’ AEG and added all the same accessories (except a shorter NX600S); where the build differed though was that I exchanged the ‘BOCCA COPPERHEAD’ amp for a black NP Tracer Unit; this is basically a mock suppressor that houses a tracer element running on three AAA batteries. Here though I encountered a problem… the diameter of the rail is 32mm, and the diameter of the tracer unit 35.4mm, but luckily a visit to ‘All Ages Airsoft’ shop on London Rd in Dover allowed me to ‘fettle’ the lower part of the rail and get the tracer unit fitted. Marcus, the shop owner, has worked out how to do this simply; so, if you want a tracer unit on your ‘FREEDOM FIGHTER’ he’s the man to speak to.

So, there you have it. Working completely within the NUPROL range of RIFs and accessories, I created two similar, yet different AEGs that are both ideal for CQB use. Both will be getting fully tested at TripleA in the months to come, and I’ll be certain to feed back any changes I make so that you can follow this project; all in all, I’m absolutely delighted with how this pair of AEGs has turned out. NUPROL AEGs and accessories are in stock with all good airsoft shops in the UK (and beyond now!) so everything detailed here is readily available.