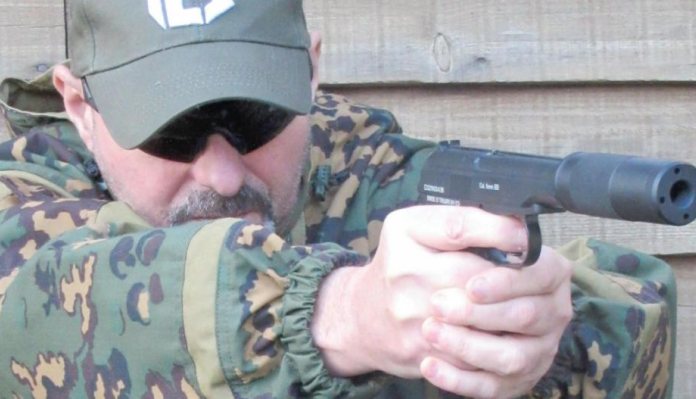 Okay, I’ll admit it, I do have a bit of a thing about OPFOR airsoft, and in my mind historical OPFOR is a fitting part of the game as a whole, as not only does it give you a chance to spend whole weekends in the boots of your favourite era combatant, but it gets you heavily involved in the very history itself. The line between historical re-enactment and historical airsoft is a very fine one indeed, and on many occasions you’ll find that many, myself included, have a foot firmly entrenched in both camps.

Because of this I’m a bit of a stickler when it comes to the replica rifles, carbines and pistols that I own and use in this role; I know that there are already replica Makarovs out there, and I own a number of the existing models in my OPFOR collection. They are all lovely in their own way (even the humble springer version that I bought for a tenner some years back!), but for various reasons they’ve not really been “game-able”, being under-powered, overpowered, or just plain gas-inefficient!

Thankfully that all appears to have changed thanks to ICS, who seemingly out of the blue, have just released the production version of the PM-2 that they’ve been teasing us with at the shows for a while now!

The Makarov pistol resulted from a design competition for replacing the Tokarev TT- 33 and the Nagant M1895. Rather than building a pistol to an existing cartridge in the Soviet inventory, Nikolai Makarov took up the German wartime Walther Ultra design, fundamentally an enlarged Walther PP, utilising the 9×18mm Makarov cartridge designed by B.V. Semin in 1946. For simplicity and economy, the Makarov pistol was of straight blowback operation, with the 9x18mm Makarov cartridge being the most powerful cartridge it could safely fire.

In 1951, the PM was selected because of its simplicity (few moving parts), economy, ease of manufacturing, and reasonable stopping power. It remained in wide front-line service with Soviet military and police until and beyond the end of the USSR in 1991. Variants of the pistol remain in production in Russia, China, and Bulgaria. Since the early 2000s there has been constant talk of the Makarov being fully replaced as the Russian service pistol, with numerous contenders being named as the “possibly, maybe”, with models such as the Strizh and PYa being discussed, but the fact of the matter is that even today there are large numbers of Makarovs still in Russian military and police service and it is certainly still in service with many Eastern European and former Soviet republics, North Korea and Vietnam.

It may be said though that the Makarov PM is a tried and true, currently manufactured sidearm that has seen over 65 years of service in some of the world’s harshest climates. Throughout its history, the PM has undergone several re-designs, including the upgraded PMM model that features a more ergonomic grip and increased magazine capacity over the original. Regarded as the almost perfect sized pistol, the Makarov is a blend of effective concealment and reasonable firepower.

With this amount of background and longevity I am absolutely gobsmacked that it has taken a manufacturer so long to replicate this Hot and Cold War warhorse in a truly workable form! As I mentioned earlier a number of manufacturers have out their cards on the table in relation to the Makarov, but ICS seem to have come out of nowhere with their take on the venerable Soviet classic!

This ICS Makarov is a non-blowback CO2 model, and is constructed almost entirely from high-quality alloy, featuring a full metal frame and slide with neat black Soviet Star polymer pistol grips. The pistol is sized well to fit in almost any era modelspecific holster. It features a base magazine release with a single stack column 13 BB magazine. In its basic form the Makarov will chuck a BB downrange at a friendly 300-310fps using .20g BBs which makes it great for close range encounters. The CO2 bulb is easily fitted by simply removing the pistol grip (one flat-head screw in the rear secures this), and the hop adjustment is extremely easy to adjust as it sits on the top of the slide; ICS include Allen keys in the box for both the hop adjustment and for driving in the CO2 bulb.

What’s also included in the box is undoubtedly the bit I love best though, and that’s a second, threaded muzzle which will allow you to fit the dedicated suppressors; a short one was included as part of the package I was sent, and a longer version is available as an accessory! Fitting this is also a snap, as just a single small screw holds the drop-in muzzles in place; it’s simply a case of remove the screw, slide out the original muzzle, slide in the new one and re-secure with the screw. Once you have the threaded muzzle in place then it’s onto the suppressors themselves, and lovely they are too! I’m going to say that ICS have taken things a step further by offering their two suppressors, one at 100mm long which looks darn cool, and one at 170mm long that for me is the winner for two reasons.

First off it does genuinely reduce the crack at the muzzle as the suppressor contains foam baffles, and for any self-respecting OPFOR player that is a real bonus for those sneaky-beaky moments. Secondly though the longer suppressor mimics that of the Soviet-era Pistolet Besshumnyy or Silent Pistol! The Izhevsk Mechanical Plant introduced the PB, designed by A.A. Deryagin, in 1967. The PB was basically a heavily-adapted Makarov PM with a shortened slide and a repositioned return-spring, and the design retained the Makarov’s exposed hammer, double-action trigger and slide-mounted decocker. Whilst the PB suppressor is semi-integral, with the rear section encompassing the ported barrel, the ICS accessory closely mimics the detachable front section, and makes their PM much closer to the real deal than ever before; okay, I geeked-out there for a moment, but this stuff is important!

From a safety perspective the PM-2 features both the standard safety lever on the rear upper left of the body, with a bright red spot indicating that the pistol is in fire mode. In addition ICS have also gone the extra mile by fitting the pistol with an Air Pressure Release Function; by pressing the hammer down you can vent the remaining CO2 from the bulb when you’ve finished playing to ease removal and ensure that it’s 100% safe for transit. A leaflet is included in the box going into the detail of this procedure and I would urge you to read it lest you inadvertently damage your lovely new pistol!

Now I will tell you that during testing I experienced a few teething issues with the first PM-2 I received, and I duly advised ICS of this, and amendments have already been made to the finished product; ICS even sent me the new model to re-test. To start I ran a NUPROL CO2 maintenance bulb through the pistol to lube everything up, firing off iro 150 BBs, and then replaced this with a fresh standard bulb before heading to the chrono where everything settled to 0.83-0.89-Joule/300-310fps; unlike the original pre-production tester I was sent I’m pleased to report that the power level of the model you’ll now find for sale has now remained constant and makes the Mak 100% UK site-friendly, and a hoot to shoot!

In conclusion, whether you are interested in the historical side of things, want something for OPFOR “business” that’s going to do the job, or you just want a pistol model that is a little different than most you’ll find at your local skirmish site, then this super model from ICS is thoroughly worth a look. If like me you fancy owning something to really fit with a bad guy loadout then the ICS PM-2 is essentially a must-have!

For more information on the PM-2 please visit icsbb.com, and my thanks as always go to fire-support.co.uk who stock the full range of ICS goodies!