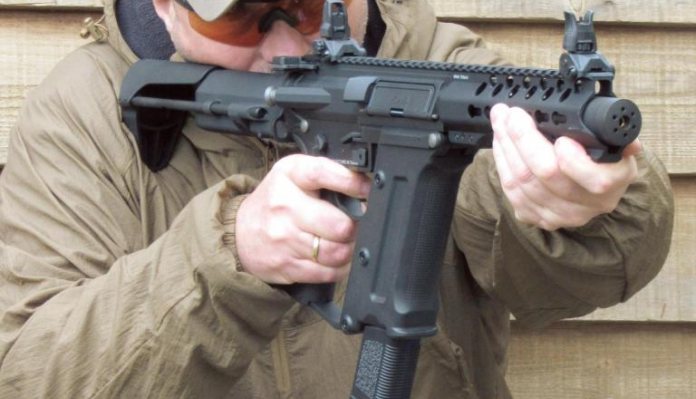 I always find it extremely interesting how the airsoft world sometimes comes out with a model that bears little resemblance to anything in the real world, and that such models are viewed with equal amounts of devoted wonder or absolute repulsion amongst the playing community!

Airsofters will comment most verbally about something that does not fit their view of what an airsoft rifle or carbine should look like; however, as far as I’m concerned, as long as said rifle or carbine functions well and is easy to manipulate then it’s most definitely got a potential place in my armoury. And now, the latest addition to the KWA ‘Ronin’ AEG line-up is here and it’s certainly got those tongues a-waggin’! The term ‘Ronin’ originated in the Japanese Nara and Heian periods, when it referred to a serf who had fled or deserted his master’s land. It then came to be used for a samurai who had no master.

What better a name for an airsoft carbine then? Many of us belong to teams, often with a strong team leader, but there are times at any game when we all go a bit ‘lone wolf’ and, in this respect, the term ‘Ronin’, a fighter without a commander, might well sit comfortably on our collective shoulders.

The new ‘TK.45 Tekken’ from industry manufacturing veterans KWA is a model that really will divide opinion, and that is certain. Following the trend in the real firearms world (pistol calibre carbines appear to be in vogue yet again!) the TK.45 is a unique AEG from the get go, as the ‘.45’ in the name refers to the ‘calibre’. Some may say that it resembles, to some degree, the Vector from KRISS, and I’d have to agree that the design and ergonomics certainly give a healthy nod in that direction; however, at the end of the day, the Tekken is very much its own beast, with its own character and ‘feel’.

Going their own way

KWA have really been going their own way for some considerable time now and have been wowing the market with their range of super-authentic, in terms of operation, ‘ERGs’, or electronic recoil guns. I looked at the original AR ERG many moons ago now, and it’s still a super carbine, and KWA have been cranking out variations of their classic ‘recoil’ AR models for a few years, so their system is fully tried and tested. To date, they have followed a mixed ‘civilian’ path, whilst still making some superb military style carbines and their ‘Ronin’ models really show a new direction, in that they feature parts designed by KWA themselves.

The ‘Tekken’ TK.45 Series is available as either the field-ready TK.45 AEG 3.0 carbine, with a slender aluminium 10-inch M-LOK free float rail and KWA’s Kinetic Feedback System (KFS), or as the TK.45c AEG 2.5, with KWA’s Variable Performance System (VPS) unit, which allows a quick and simple FPS/power adjustment. Both models feature quick-change spring systems that add even more customisability to the series.

Featuring fully ambidextrous and oversized controls, including an aggressive ‘ambi’ charging handle, KeyMod or M-LOK aluminium free float rails, and PTS Enhanced Polymer Furniture, the Tekken Series displays KWA’s unrivalled quality and craftsmanship. The Tekken TK.45 features many of the same innovations, with a couple of surprises, especially as it features KWA’s new Variable Performance System (VPS) in the 2.5 models; you can now easily adjust the FPS/power, which is controlled by the VPS System, with tools that are included in the package for adjusting the levels for CQB and long range battles. The included magazine features a Switch Cut-Off capability that makes this carbine more realistic and is an easy indicator when you are out of ammo, and it also prevents damage caused by dry firing. Both the 2.5 and 3.0 models are perfect for tight areas, where quicker movements that can make the difference between winning and losing.

Like all current KWA rifle offerings, the receivers of the ‘Tekken’ Series are full metal, but they also feature contemporary billet-styling on both the upper and lower, further enhancing the aggressive and modern look of the AEG. The angled polymer magwell doubles as a foregrip and allows for maximum retention and manipulation when you need it. Both versions come with a ‘Tekken 120’ magazine, a 120BB mid-cap that is also available in a 3-pack. A modified and updated mechbox means that you can easily drop in your favourite electronic trigger without complications. All ‘Ronin’ models feature full metal modular upper receivers that you can swap out with any KWA AEG 2.5 or AEG 3.0 model.

The CQB version, dubbed the TK.45c, offers a 6-inch KeyMod rail and KWA’s new compact tanker stock, which can also be found on their Ronin 6 PDW. The TK.45c is an AEG 2.5, so it features the VPS unit for a quick, simple FPS adjustment through the stock without the need to get into the mechbox. On the model that I received from John at J-Tac Custom Airsoft for testing, the integrated M-LOK rail on the handguard and full length Picatinny top rail allow you to fully customise the TK.45c with almost limitless accessory options. This AEG comes with detachable polymer flip-up rear and front sights, which are perfect to get you going, and these can be flipped down to make room for an optic of your choosing. Ambidextrous controls and an adjustable PDW Style Stock (which cleverly incorporates the battery compartment) means that both left and right-hand users and players of all sizes can operate this carbine easily.

I’ve test-fired several the KWA AR variants over the past couple of years, so my expectation on performance was high and I was not to be disappointed. The rotary hop makes adjustment incredibly precise and easy and, once it’s set, it stays that way. The proprietary KWA 120BB magazine is ideal for either skirmish or MilSim use straight out of the box and the test models fed perfectly.

Once the hop was adjusted, the reading through the chrono was a consistent 0.98-Joule/326fps on a .20g BB; now the power on the VPS-enabled model, as stated earlier, can be adjusted right up to 1.33-Joule/380fps, so I think you’d need to keep a careful eye on ‘creep’ to start out with, but like the hop, once the power level was set during testing, it did stay consistent. Range was excellent for a shorter AEG, with shots consistent and flat to 30m.

Overall, the look and feel of the new TK.45 Tekken ‘Ronins’ from KWA is absolutely superb, given their full metal alloy parts and cracking furniture, and the different variants continue the trend of absolute quality that I have come to expect from their latest models. The finishing throughout is absolutely impeccable, right down to the finest detail, and simple unobtrusive trademarks give the whole package a real ‘top end’ feel; this is definitely a case of ‘less is more’ and the AEGs are all the better for it.

By combining a rugged, metal build with the power and accuracy needed to keep you in the game, come what may; KWA has once again created an AEG series that looks cool and unique, and I have to say all power to them for doing so!

Retailing for around £415/£445 for the different variants the TK.45 Tekkens are available now from select retailers, but the test model featured here came thanks to jtaccustom.co.uk.