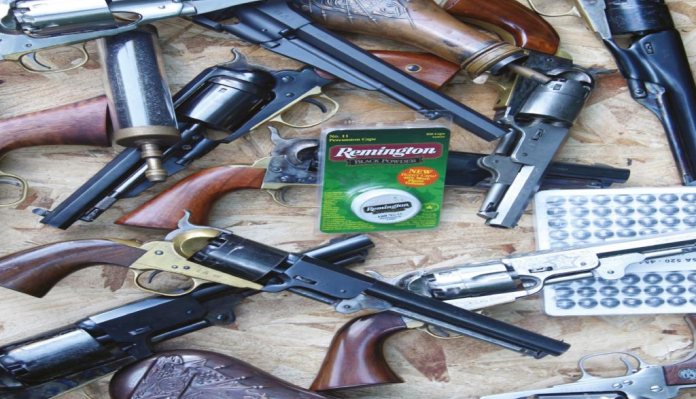 The sport of shooting is not just about how many rounds you can get into a magazine and how fast you can empty that magazine or the distance at which you can hit a target. It can be very relaxing and challenging, even at short distances, when the gun of choice is a muzzle-loading revolver.

Depending on your age and how long you have been shooting, you may remember the ‘good old days’, pre-1997, when those of us who liked shooting cartridge handguns were deemed as not capable of owning such equipment. Post Dunblane, when Mr. Blair decided to ‘take the guns off the street’ and allow the people to sleep more soundly, the sport of pistol shooting was left decimated. Twenty years on, the guns are still on the street of course, but tens of thousands of sportsmen and women lost a demanding and rewarding hobby and it near broke parts of the shooting industry too.

To my knowledge, the cost to the public purse of this exercise has never been revealed, but I suspect many would be alarmed at the figures. So, handgun shooting in the UK disappeared in 1997. Well not quite, as there was always a group who preferred using ‘old fashioned’ muzzleloading pistols and revolvers. Even amongst the Western fraternity who were shooting cartridge revolvers, many had a percussion revolver in their kit.

It was always a bit of a mystery to me why so many of these Western shooters simply gave up the hobby without even trying to embrace the muzzle-loading aspect. Perhaps their interest was purely shooting rather than historical; as after all, the history of the Old West was built around these guns. Your Editor Pete Moore, who believe it or not, was a Cowboy Action shooter, told me that he too gave up on muzzle-loading revolvers.

He had been testing the various makes for years in the old Guns & Shooting magazine, along with Shooting Sports and Gun Mart and knew what to do. After the ban, he went straight out and bought a pair of the new muzzle-loading, Uberti Cattleman Colt Peacemaker single action revolvers with dismountable, loadable cylinders and persevered for a year or so, but in the end gave in. His reasoning was yes, he knew how to use them but their unreliability and the hassle of cleaning finished him off.

Shortly after the handgun ban, we saw the introduction of ‘long barrelled revolvers’ (LBR) and later ‘long barrelled pistols’ (LBP) but they did little to bring back shooters to the fold. To this day, they have not made a significant impact on the shooting scene in the UK. If you wish to shoot a handgun that is not two feet in length, then you have only one direction to go – to the darkside.

If you have never shot a muzzle-loading firearm of any kind, then you will possibly have been dissuaded by the stories of how dirty they are, how they often misfire and that cleaning is a nightmare. These exaggerated stories are often put about by the very people who have not shot the guns. So, let us assume that you want to give muzzle-loading revolvers a try, where do you start?

Firstly, we will look briefly at those who do not currently hold a Firearm Certificate.

Your first recourse is to find a club that caters for these guns and go along to see if they are accepting new members. If you are fortunate enough to find such a club that is having a guest day, then you should be able to turn up, pay a small fee and have a go, providing they have a member who is qualified and willing to supervise the discipline. The alternative is to join the club as a probationary member, usually lasting for six months, and take it from there.

Be aware that although many indoor clubs cater for muzzleloaders, many do not allow the use of original black powder, as their fume extraction system may not cope with the smoke. In these situations you will be limited to using black powder substitutes. Once you have full membership, you will be able to apply to your local police force for a Firearm Certificate (FAC). Before the firearms enquiry officer (FEO) comes to visit, you must have an approved gun cabinet installed in your home and if you are going down the black powder route (rather than substitutes) you need a suitable storage box for the powder.

You also need two more pieces of paper as outlined below – both free. The time taken from application to grant of a certificate varies from one police force to another, but be prepared for a wait. A glance at any shooting forum will bring up stories of several months to get the job done. You might be advised to allow up to twelve months from joining the club to having the certificate in your hand, but don’t be put off. Your patience will be rewarded many times once you start shooting.

If you already have an FAC, then you are three quarters of the way there. There is possibly someone in your club shooting a muzzle-loading revolver, and I’m sure that if you ask nicely, they will let you have a try. If you find that you like it, then you can purchase the required variation(s) and apply for the two necessary pieces of paper.

The one piece of kit that new black powder shooters will probably not have is the wooden storage box mentioned above. There are guidelines for the construction of the box, which can be obtained from your firearms officer. Basically, the exterior walls, base and lid must be made from 18mm thick plywood, with interior walls a minimum of 6mm thick. The interior height must be 30% more than the height of the powder container. These boxes are available commercially or you could make your own.

Assuming that you have everything in place that is legally required, then obviously your first acquisition will be a suitable revolver. Today’s reproduction percussion revolvers are invariably Italian clones of 19th century American handguns. If you are looking to buy a new revolver, the two big players in this market are Uberti and Pietta. The former manufactures a comprehensive range of guns that were produced originally by the Colt company, as well as a couple of Remington offerings, while Pietta also incorporate one or two specialist examples, a number of Confederate models along with a selection of non-authentic hybrids.

Depending on your chosen activity, the guns range from a small 5-shot, .31 calibre Colt Pocket revolver up to the mighty Colt Walker weighing in at around four and a half pounds. The usual .36 calibre Navy and .44 Army models are offered by both manufacturers, with Pietta throwing in items like the Starr, LeMat and Colt Paterson. Pedersoli, renowned for their super long guns, dip their toe into the water with a target version of the Remington New Model Army, aka the 1858 Remington.

A glance through dealers’ magazine adverts and web sites will throw up numerous second hand pistols from the above manufacturers, as well as some, which are no longer in production. Amongst the normal offerings, Palmetto Arms were the only company, to my knowledge, that made a clone of the Colt 1855 side hammer revolver and you may still find one if that is your choice. They also made a super copy of the Whitney .36 Navy and they too are out there if you look.

Keep an eye out

The now defunct Armi San Marco company produced a number of standard Colt models and they occasionally turn up. Highly revered by many CAS shooters is the no longer produced Ruger Old Army revolver, not really a clone of anything in particular but Ruger’s idea of what a percussion revolver should be. Strong and well made, these bring premium prices on the second hand market.

You may also come across Colt Second Generation revolvers from time to time, along with some Signature Series Colts too. The former were sold in the 1970’s and 1980’s and include clones of just about all of the standard Colt percussion revolvers from the previous century with serial numbers carrying on from one hundred years previously.

The parts were actually produced in Italy and shipped to the USA for assembly and finishing. Because they were not exported as complete guns they do not have the obligatory Italian proof marks. The Signature revolvers are again Uberti products, assembled in New York and every model has a facsimile of Sam Colt’s signature on the back strap. New in the box examples of all of these modern Colt revolvers are prized by collectors in the USA.

The term darkside is generally associated with the use of black powder but there is an alternative. Should you decide that you would prefer to use modern black powder substitutes, or even smokeless powders, rather than black powder itself, then the above mentioned box and two pieces of paper are not required. The alternative substitutes available are Pyrodex and Hodgdon 777 powders. Pyrodex has, to me, little advantage over black powder, while the stated advantage of 777 is that it is easier to clean. There may be a modicum of truth in this statement but the gun has to be cleaned anyway and besides, I like the smoke from black powder!

Over the last few years, a third option has been introduced for those who want to shoot these old style revolvers without the perceived hassle associated with black powder or the above named substitutes. Competition shooters clearly need their guns to run faultlessly throughout a day’s shooting and the fouling which accompanies black powder requires constant attention to keep the gun from binding (jamming with excess fouling) the last thing you want part way through a stage. It is now possible to have some of the guns ‘converted’ to use smokeless powder with its obvious advantages.

The conversion requires the manufacture of a new cylinder, which is proofed for the extra pressure of the modern powders and which uses shotgun primers for ignition rather than standard percussion caps. Once again, the storage box and extra two certificates are not required but you need to take into consideration the extra cost of these guns, and in some cases an extra piece of loading equipment, and whether or not your shooting will warrant it. Another conversion sees the replacement of the standard nipples with a cup, which takes the shotgun primers instead of standard caps, albeit using black powder.

For those who hanker for the feel of their old cartridge revolvers, Westlake Engineering produces a cracking piece of kit based on an Armscor double action revolver. This is another smokeless powder option, with four or six-inch barrel and no ‘coat hanger’ on the butt, using standard .38/.357 lead bullets and a small charge of powder and shotgun primers for ignition. Details are on their web site.

So there we have it, a brief overview of the first steps in shooting muzzle loading revolvers and what is available. Check out the web sites below for more information. Next time we will look at the extra equipment that is required and the loading of these old style and new variation handguns.