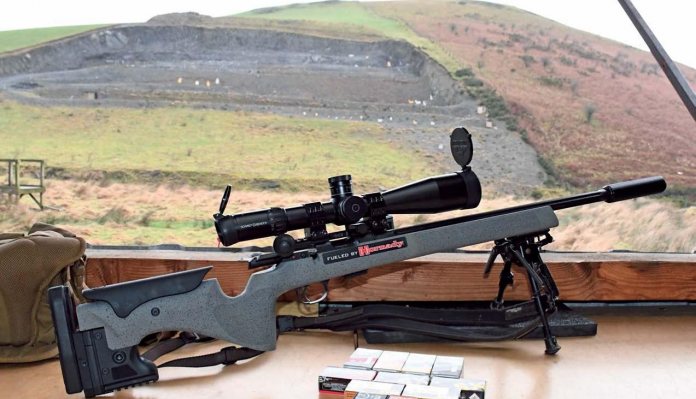 CZ’s 457 LRP is a heavy fluted barrelled, target stocked variant of the core 457 multibarrel platform and although not facilitating fast changes, allows extra barrel kits. Here, the major exhibit is the stock, something a lot of designers get creative with but do not always do very well, other than just looks. The LRP begins with an overhanging 25 MOA Weaver rail for long range shooting. The length is sufficient enough for longer targetstyle scopes and allows sufficient space for correct eye relief. My appetite was whetted.

Twin extractor claws span CZ’s control feed bolt face with a mechanical ejector appearing below as the bolt is drawn fully rearward on its 42.5mm stroke. The rail is slotted and screwed over the machined in dovetails, so not only is it functional -allowing return to zero with barrel/scope swapsit helps stiffen the otherwise open-topped action supporting that 22mm diameter barrel.

It’s cylindrical action profile blends towards parallel sides at the rear, with a long slot for bolt handle reciprocation. There is a single rear locking lug being the base of the handle itself. It can’t snag or stall on any surfaces, it never withdraws from the slot, enabling intrinsically smooth operation and minimal slop.

The short shaft is 130mm long with a 33mm handle extending to support the 33mm spherical knob. It’s facetted like a giant gem and some say it looks too bulky, but this is the finest bolt action rimfire I have operated, regardless of price. The impeccable mechanical flow and ergonomic balance accommodating multiple fingertip or full grip operation styles. The 60° lift clears the scope and mounts easily.

Striker weight has been reduced 33% to minimise discernible momentum when it fires, without any bolt handle movement either. The firing pin’s chisel tip shows a flat ‘brow’ to interface with the outer breech, limiting travel and likely extending the firing pins life. The test rifle has currently run over 1000 rounds without any soft strikes or misfires.

A familiar-looking single column 5-round polymer magazine is supplied (10-round mag available) and the release catch sits at the front of the well. The rounds slide snag-free into the breech without damage or excess lubricant shedding and if you swap calibres, the feed ramp is part of the action insert. After fitting a different barrel, I can confirm everything worked perfectly in .17 HMR with ballistic tipped and hollow-point bullets.

The single-stage trigger is adjustable from 800 to 1500-grams and CZ’s manual describes how to adjust for weight, sear engagement and overtravel. Once bedded in after 150-rounds, I enjoyed clinically precise operation with a twominute tune-up and it hasn’t needed anything more. The red cocked action indicator pin appears from the steel shroud. The right-hand side, 2-position safety, pushes forward for FIRE and rearward for SAFE without locking the bolt. Rear-left of the action is a modern nontrigger dependant bolt release.

The rifle is supplied with a radially ported ½” UNF muzzle brake wrapping the well-cut crown, to which I added a SAK sound moderator. The 20” barrel includes flutes along its profile, all the way back to the action. It shows a deep matt black/blue corrosion-resistant finish which has withstood extensive use in all sorts of rain, snow, ice and mud.

The barrel swap involves removing the receiver from the stock with Twin T25 Torx action screws, slacken off two angled grub screws at the front of the action and the barrel will slide out. The small spacer within the action mates into a rebate of appropriate calibre, so if you change to say a .17 HMR, the job can be done in five minutes with basic tools. You do need the correct magazine for either .22/.17 cartridge length and a small spacer. Overall, its a good design.

The purposeful stock is visually striking, featuring a heightadjustable cheekpiece and recoil pad with angular float. Both need a T25 Torx to adjust and the cheekpiece may need removal to get the bolt out.

Everything locks 100% solid and notably, the comfortable recoil pad fits nicely without slipping from your shoulder. Spacers allow the length of pull (LOP) to be adjusted from 351-382mm and the comb has a medium width of 47mm, maximising eye/ scope alignment. I particularly like the lower scalloped sides to minimise lateral jawbone disruption, although they might just look like pretty curves, they are 100% functional.

The beech structure shows a seamlessly machined compound material build including aluminium sections. All the timber is coated in a soft-touch finish which is easily cleaned. There is lateral stippling on the forend as well as the vertical pistol grip, which includes a delicate ambidextrous palm swell.

The barrel floats free all the way to the action within the stiff forend’s 59mm width. No accessory rails are shown and although I have no specific need for them, chassis rifles do benefit slightly here.

The two-piece aluminium bottom metal includes a guard big enough for a gloved finger to access the 8mm wide, curved trigger blade without interference. Reach to this blade is 85mm from the web of your grip, with ‘thumb up’ or ‘wrapped’ enabled. There is plenty of space for three lower fingers to grip the gun assuring a delicate, yet secure hold to initiate linear trigger squeeze.

A butt hook sits underneath the back end and includes a 75mm accessory rail for a monopod. It is also suited to a soft rear bag or fist. The ‘hook’ itself is plentifully spaced for reach on the supporting hand/arm from the recoil pad, with stippling on all surfaces aiding grip. You might think it’s all a bit excessive for a .22 rimfire with minimal recoil, but I disagree. I feel the design of the stock is the signature of a true shooter, not a stylist addressing looks alone. Quick-release sling anchor points are shown either side, with conventional sling studs on the forend’s stippled underside for a bipod and other accessories.

I ran the gun in on all sorts of ammo but the main test was to use premium match ammo. Viking Arms supplied SK Standard, Match and Long Range variants for more detailed reviewing. All use a 40-grain round nose lead bullet with a delicate greasy feel but no excess wax. Average velocities in the CZ were 1071 FPS for Standard (extreme spread 10 FPS), 1079 for Match (ES 19 FPS), and 1127 for Long-Range (ES 14 FPS). The latter was clearly supersonic and although effective on targets at intermediate ranges, lost out to both subsonic examples at longer ranges beyond 200m.

Although initially slower, these never suffered dropping back into the supersonic/transonic flight regions. It was also interesting to note that these bullets performed differently at the critically variable 0-5 °C temperature ranges through the test period, where the speed of sound is variable too.

In the end, SK Match proved time after time to be the front runner over ELEY and RWS supersonic variants. There were no damaged bullets and perhaps 1 round in every 50 confusing matters. In zero wind, the 100m test targets showed sub MOA performance that allowed concentration on distant targets, where the wind is always going to be the real challenge.

Bolt manipulation was light and fast with zero distraction from point of aim. The ability to reload quickly without disruption was appreciated, allowing shot strings to be performed more rapidly in consistent wind intervals. It was appreciably non-disruptive in awkward improvised shooting positions, where the slight rearward balance point left the gun pressed into the shoulder and feeling like it was ‘part of you’.

The inherent consistency of performance and the ability to spot and dial accurate corrections for downrange wind conditions at ranges out to 305m allowed me to enjoy every aspect of shooting the rifle, with excellent head support. It’s fascinating to explore more of the long-range rimfire ballistics, all done at relatively low cost with significantly less noise too.

The supplied test target showed 9mm c-t-c groups on the test range and I found the rifle outperformed this in the real world at 50m. Extended distance targets speak for themselves and I never felt this gun let me down, just my own ability to judge the wind, I was the weakest link and enjoyed being so.

In my opinion, CZ has demonstrated superb execution. Although perhaps not the rifle for everyone, it is a perfect example of a focussed design that meets or exceeds every one of its marketing parameters. It has actually introduced me to a whole new world of technical shooting challenges which I intend to continue pursuing. One of my all-time favourites for nearly every reason.