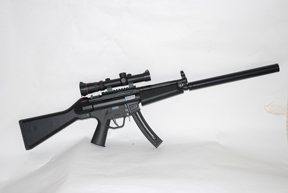 In 2008 the buzz word for aficionados of 22 rimfire, military look-a-like, semi-autos was doubtless the GSG-5. Made by German Sport Guns (GSG) the look was a near 100% copy of the famous Heckler & Koch MP5 sub machine gun. Also a clever take on the men who originally made it famous - Grenzschutzgruppe (GSG) 9, who are the German anti terrorist unit.

GSG is now handled by York Guns, who are naturally keen to push the brand and sent me one with promises of accessories to follow. These include a Picatinny-style forend, forward grip, lights, lasers, double mag clamp, scope mount and a choice of telescopic or side-folding stocks.

You can’t fail to notice that the GSG-5 comes with what appears to be a moderator, which is actually a dummy barrel shroud. When it first appeared many people thought they could simply get the barrel cut down to a more realistic length; I’m afraid not! To qualify as a Sect 1, Large Firearm it needs to be a minimum overall length (muzzle to butt) of 24” with a 12” barrel. Due to the short action this is not possible, as the fixed butt is removable and a telescopic unit can be substituted. So to conform the tube has to be 16” to make up the required 24” to the end of the receiver, regardless of your choice of furniture.

Also you cannot get round this by electing to stay with the fixed butt, as this part has to be removable to allow stripping. So the MP5 SD (dedicated, silenced MP5) look given by the barrel shroud does offer a bit more realism. That aside the GSG-5 is a dead spit for the current MP5, which as a student of military weaponry I found most pleasing.

With the exception of the barrel and bolt assembly the majority of the rifle is made from aluminium alloy and polymer. Sights consist of a fixed blade in a ring protector up front and a 4-position dioptre, which offers a basic V-notch and three apertures for different ranges. The scope mount clamps to the receiver, unlike the H&K Q/D design and offers a Picatinny rail.

The forend is tapered and textured for grip, the fixed butt slides onto the rear of the receiver and is retained by a cross pin. On the left side is a sling bar with a ring up front by the fore sight for a snap hook.

Feed is by a curved, 23-round, single column magazine. Its sides are slotted and features ambidextrous, external, follower catches, which makes filling up easier as you can take the weight off the spring. The mag release offers a cross bolt at the right of the well, combined with a lever at the rear. The ambidextrous safety lever shows FIRE (F & red dot) and SAFE (S & white dot). The trigger has a broad, long blade, but the pull is soft and mushy.

The magazine safety is useful in that unless a mag is in position the trigger is blocked. Pleasing is the last round automatic hold open. Cocking is by a plunger that sits over the barrel in a tube. All you do is pull back on the knob (forward left) to retract the bolt then let it go to chamber. The tube has a cut-out that allows the action to be manually held open, I found this great for loading and stoppage drills.

Generally the GSG-5 is well presented and if you like this sort of gear it’s certainly an exciting looking rifle. York Guns are now offering a proper moderator; the dummy unit is 8 ½” long and screws into a collar at the end of the forend and locates at the muzzle. The real suppressor is 13 ½” and consists of a forward baffle stack with a non functioning rear chamber. The standard GSG-5 is 35 ½”, but 38 ½” with the moderator. This now allows you to take the rifle out after rabbits using sub-sonic ammo should that be your thing. I know from our website there are a few people out there very keen to use it in this role… Most odd is how slim the barrel is at a mere 0.480”.

Last year my impression of the GSG-5 was that it was ammo sensitive and as I recall the gun ended up running best with Remington sub-sonics, despite the assumption that hi-velocity fodder would be better. This time round it proved far more versatile.
The magazine loads to a capacity of 24, however, I got first round feed problems, so found it sensible to reduce the load to around 20/22, which is still generous.

I used a number of brands of ammo and found the rifle worked best with Remington hi-velocity (HV). It proved very clean in terms of the debris that gets blown back into the action, which is unavoidable on a 22 semi-auto. The HV bullet is also coated so less lead shaving too. With wet-lubed (waxed) bullets the build up of crud and subsequent problems was greater and much sooner.

On average you could put 150-rounds+ of HV through the gun with good reliability apart from the occasional and unavoidable, ammo-related failures to cycle, which is a feature of rimfires. With sub-sonics and due to their lower power, operation is affected earlier! I would say you can get three mags off before things get less reliable, however, 60-shots for a rabbit raid is still a lot of ammo… Remington importers Edgar Brothers are sending me some of their ultra high velocity Viper ammo to try, which with the ability of their HV load could be another consideration.

Taking the GSG-5 down requires a medium bladed, slot head screw driver and a #3 Allen key. Like the MP5 it’s held together by cross pins, though these have screw heads as opposed to spring clips. To start cock the hammer and set the safety to S.

Undo and remove the two pins at the front and rear of the pistol grip assembly and take the butt off. Looking into the rear of the receiver will show a silver block with an Allen screw. Undo this and with your finger pull it down where it can be removed.

Now slide off the grip to the rear and retract the cocking handle to push out the bolt assembly. This sits in an open, alloy carrier block complete with return springs, which gives just enough access to clean. It is possible to further split the carrier as it’s in two halves that screw together, but I would not recommend it!

Due to the reasonably confined nature of the design, items like tooth brushes are ideal for getting in around the breech face and feed ramp etc to remove debris. As are air and solvent sprays for blasting out debris from the trigger mech that can’t be reached. Reassembly requires the bolt to be in enough so that the hammer drops into the cut-out in the carrier. Then slide the pistol grip forward so you can insert the front pin. Fit the locking block and screw, slide on the butt and put in the rear pin and you’re done.

With all the crud removed, it worked fine and if anything ran a tad smoother, as it had eased in a little. I fitted a Nightforce, NXS 2.5-10x24 compact, with its illuminated, Mil-Dot reticule it offers low power for close in work yet can be wound up to X10 for longer/precision shots. Plus this short optic really suited the GSG5!

Accuracy-wise the GSG5 was pulling around 1 ½” at 50-yards with the HVs, yet was more accurate (sub-1”) with the slower sub-sonics. But like any rimfire semi, it’s all a matter of finding the right fodder and when clean the GSG runs happily on subs… Though the mushy trigger took a bit of getting used to. The moderator proved efficient with both ammo types.

What I did like was the noise the gun makes as the bolt holds open after the last shot. From a Practical Shooting perspective this will speed up magazine changes. Likewise the well positioned cocking handle is a boon for stoppage drills.

What you want to do with the GSG5 is down to you, but I see it more as a club level gun for Practical-type use and it’s a huge amount of fun too. But the moddy does move it on to a fast fire rabbit basher, but here I would say consider how it looks; as it’s identical to the world’s favourite 9mm SMG…

Overall this is a fun gun with a deal of practicality that adds realism and choice to those who want a military look-a-like rimfire, which certainly includes me…

GSG for 2009
Now that York Guns have the German Sport Gun distributorship they have hit the ground running. The basic GSG5 (with dummy moddy) will soon be joined by the GSG5SD, which features a large oversized barrel shroud and tubular/ribbed forend. I was also told that they will be offering a warranty/repair service for any rifles that need it.

New too, and available in a few months will be the GSG-47, which is a copy of the famous KalashnikovAK47. It will be available in two models, black synthetic (P) or wood stock (W)  furniture and with a large range of add on accessories, that will include scope mounts, forward grips, side-folding stocks etc. I saw one at IWA and it does look good.