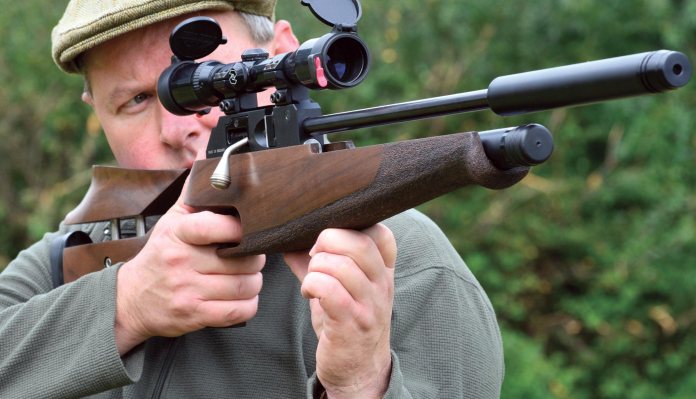 I’ve had a love and fascination for all things airgun for many years now, and it’s brought me a great deal of pleasure over the years. Yet it’s the competitive side that really gets me going. The quest for ultimate accuracy, and the science that lies behind achieving that goal, is for me, the driving force that keeps me coming back for more.

Field Target shooting, and latterly, Hunter Field Target, are ultra-challenging disciplines that demand a level of performance from any airgun if success is to be achieved. Small kill zones are an increasingly familiar site on target courses up and down the country, and hitting them requires consistent accuracy from any hardware.

I was always told to take a look at the results in competition, and see which rifles are winning; and it’s true to say that a list of usual suspects soon emerges. Of course we’re all free to compete with models of our choice, but if you want to do well, then the list of hardware from which to choose reduces somewhat. All guns are not equal!

One such manufacturer that clearly means business is Impact Airguns, and their new range of PCPs in particular, are beginning to cause quite a stir on the competition scene.

On test here is, arguably their flagship model, the Revolution GSX600, and it’s a no-compromise offering, built to perform at the highest level. Made in England, bar the barrel blank, is another plus point – so let’s see if it’s worth the asking price.

On paper the features list stacks up nicely, and when you actually get to handle the GSX600 first impressions are equally favourable. In short, it’s very close to how I would design a rifle from scratch – an adjustable match stock, solidly built PCP action, and free floating barrel, all come together nicely… and it really looks the part too!

The thumbhole target stock is made by Custom Stock in Sheffield, and is very wellshaped, including a superbly deep thumb shelf to the rear of the grip. A thick lacquer seals the American Walnut, whilst that rosewood cap sets off the target grip a treat. An adjustable cheekpiece is a great feature, but I can’t fail to mention the irritatingly sharp edges – to the point where I actually caught my hand on the front point! Subtle rounding off would be a good step here! That issue aside, further adjustment comes with the Wegu style adjustable buttpad, and with a super concave profile this is no token offering! It really hugs the shoulder in the aim, which can only enhance performance where it matters.

One look at that chunky, over-engineered breech block, and this rifle’s heritage is laid bare. Theoben’s reputation for solid-build and high-class finish are carried on in style by Impact, and the upgraded bolt handle and scalloped breech are an indication that the company doesn’t plan on resting on any previously accrued laurels.

‘Free floating barrel’ is a term bandied around rather freely these days, but the GSX600 incorporates a properly floating set-up where no restriction, clamp, or O-ring for that matter, interferes with the barrel tubes’ harmonics. In practise, the barrel is thick and rigid enough to be self-supporting and left to vibrate naturally. At the muzzle, Impact fit their latest Air Tech 250 moderator, and this beast of a moddy significantly tames the muzzle crack down to a real whisper. A secondary function of the silencer is to protect the muzzle crown, and since Impact hand-finish the crown on each barrel to an impressively high degree, this is an important feature. As a simple threaded screw-on fit, maintenance and barrel cleaning are easily completed operations too, which all adds to the enjoyment and practicality of ownership.

As supplied, the Revolution GSX600 comes with a 17 shot magazine in .177 calibre (12 shot in .22), and it follows the original Theoben design. To load the magazine the correct procedure is as follows: twist the lid of the cassette fully anticlockwise, push home the first pellet head first whilst preventing it from dropping out. Then chamber each pellet thereafter until the cassette is full. Push home the mag into the slot in the action from the left side, and push home and lock down the bolt. The first shot is now ready. Cycling the bolt to the back of the slot and forwards again will then cycle each shot in turn. These mags can be a little fragile, but in practice, if looked after, they work particularly well.

Next, the main air cylinder needs to be charged, and for this the neat front valve cover needs to be unscrewed and an external air supply (be that diver’s bottle or pump) then needs to be connected via the Foster-style adaptor. It’s all a neat, slick affair, and with a manometer underneath the forend, residual air pressures can be monitored when necessary.

Impact specify the fill pressure with this model as 200 bar, but I found, despite a regulated action of sorts, that some initial shots were slightly lower powered. After charging to a slightly lower pressure of 180 bar, velocity variation was slashed from 40fps over 95 shots to a highly acceptable total spread of 24fps over 70 shots. Any serious shooter worthy of the name will conduct their own tests over a chronograph, and it’s well worth taking the time to do so. As for the MK4 trigger unit fitted to these rifles, further tweaking and finishing happens at the factory stage to ensure that all performs as it should, and as someone famously fussy in this area, all I can say is that I have been mightily impressed with the triggers fitted to both this and the GSX200 model tested recently. A nicely shaped blade, complete with a flat front profile, and a sensitive final release are big contributory factors in results; and that’s where we’re heading next.

A combination of high-quality engineering, Lothar Walthar barrel, up-market trigger and subtle features overall should produce the goods… and I wasn’t disappointed. I’m no fan of magazine-fed air rifles, but this one does undeniably work well.

However, Impact Airguns are aware that some shooters, especially competition-minded ones, would prefer to single load pellets directly into the barrel. With this in mind, Impact have scalloped away around the breech area so this is possible. As it stands, the operation is just a little fiddly, since the clearance isn’t enormous; but, apparently, the factory are looking into modifying this area further to give even more finger clearance.

Hardware of this calibre needs to be pushed to the limit, so my initial accuracy testing began at 35 yards where genuine quarter inch c-t-c groups were the norm, with Air Arms Diabolo Field ammo. Moving to 50 yards, and from a rest, text-book half inch groups were fairly easily come by, which says it all.

Top Hunter Field Target shooter Richard Woods has recently switched to a Revolution GSX600, and with a third place achieved at his first outing with the rifle (National UKAHFT round at Cambridge) and just one point off of first place, he made his intentions clear!

Okay, the GSX600 is anything but cheap, but it is clearly built to do a job, and one of a select band of rifles, capable of top-class performance.

As an outfit fast earning a reputation for listening and working with shooters in the field, Impact Airguns are responding to feedback and producing guns that enthusiasts really want. The GSX600 is further evidence that this go-ahead company are on the right track, and on that basis, they deserve to succeed.