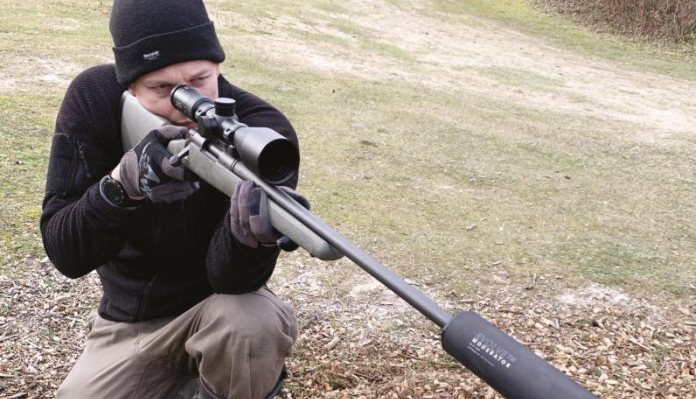 I don’t have many regrets about my life and most of those are about not taking a chance or opportunity at the time. But if one stands out in my shooting career it was re-barrelling my Riflecraft Remy 700 LSR (Light Sporting Rifle). Envisioned by Andrew Evans-Hendricks (Riflecraft MD) it uses this proven barrelled action with an HS Precision stock fitted with 700 BDL bottom metal, along with a re-crown, pillar and synthetic bedding, trigger tweak and a blueprint of the action if required.

I’d owned hunting rifles before, but, it was not until the LSR that I realised things could be better. At the time, this semi-custom build represented a real shooter at good money. With my pet load, a 168-grain Hornady A-MAX over 44-grains of Vit N140, it would shoot ½” off the bench.

I loved it and used it for everything from hunting to ammo testing and the sheer pleasure of owning an accurate rifle. My best shot ever was 385-yards on a summer Roe Buck. I remember it well, Andrew and I were in a wood and looking out across a massive field, I pinged the buck at 385 and thought too far. Andrew said: “are you going to try for it?” he continued: “you can shoot, you know your range and drops and if you don’t try you’ll never know!” Flipping down the bipod, I rechecked the range, still there, my drop was 14” and I held seven over his shoulder, calmed myself and fired. I hit him, he ran about 50 yards then fell, as I was a smidge low in the heart. Wow, what a rush.

Back then, the LSR was my only hunting rifle and I shot a lot of deer with it, until eventually the barrel wore out. No problem, I’ll get it re-barrelled and that’s where I went wrong, as I selected a heavy fluted tube, because I thought it looked cool and convinced myself it would not change the rifle. Well, it did, as off the bench that Border tube could pull ¼”, great! But it also handled like a Bren gun and I hated it. I ended up putting it in an Accuracy International Chassis System (AICS) stock, which totally changed its role and, in the end, sold it.

Many years later, I have more than enough hunting rifles from some of the bigger names in the business and I love them all. However, I have never quite forgotten my LSR, as it still is in my eyes the ultimate. ‘go-to gun’! So, where am I going with this tale? Well, since that time I have never owned another 308, or for that matter a Remington 700. In late 2019 to present I tested two, 308 Blaser’s, one the R8 Silence with its full length moddy over a 16.5” barrel and their K95 Ultimate Carbon single shot with 18.5” tube, both with 1-10” twist rifling. They both shot Hornady’s 178-grain ELD-X, Precision Hunter load, ½” at worst and it got me thinking.

I was looking for a more compact, conventional hunter, not necessarily a lightweight, but something handy. The stock on my 24”, 6.5 Creedmoor, Bergara B14 HMR had been replaced by a GRS Bifrost, due to its greater adjustability potential, so that handle was spare. It was a good design, not dissimilar to a McMillan A5, so my thoughts on a donor barrelled action were between them and Remington. I was heading for a B14, when I was sent a Remy 700 ADL from Raytrade UK (Remington importers) with the new Mc3 Tradition stock, A3 Sporterstyle, which I tested last month in the April 2020 issue. The layout with its high comb and more target-style grip proved a comfortable platform and was amazingly rigid with ally pillars as standard and ½ lb lighter than the HMR stock. Another advantage was that it came in a 1-10” twist, whereas the B14 was 1-12” and as I planned to be using heavier bullets that was the deal clincher. The HMR unit would be sold to off-set the price of the build.

I spoke to Andrew, explaining I wanted the 700 LSR’d, with the barrel reduced to probably 20” and threaded and he agreed. However, the project was not just about throwing money at something, as items like carbon fibre furniture and wrapped barrels were not on the menu, nor were expensive replacement triggers, as the unit on the Remy was surprisingly crisp and I wound the weight down to something light, but safe and well suited to hunting. However, I did have my own build spec, as over the years I have come to many conclusions on what works best for me, that gave me an idea of what I really wanted in this gun.

So, here’s my build list and reasons why, some of which were already on my shelves from kit I had acquired over time. Bipod: My LSR always wore a Harris BRS (bench rest swivel) probably the best, general use pod ever designed, not hi-tech or sexy, but it does the job. However, in the last few years I had found they add a bit too much weight and were not always needed. But still essential, so I would opt for a short-legged Spartan Precision Javelin Pro-hunt, which uses a magnetic attachment system and bond their gunsmith’s adaptor into the forend. In use, it plugs in as required and pulls out when not.

Moderator: I have an old Hardy Gen IV reflex can that incorporates a form of muzzle brake, which I know actually contributes to recoil control and, as the LSR Mk II was going to be in 308, it seemed the perfect choice. However, at BSS 2020 I saw the A-TEC H2, modular model that uses their A-LOCK attachment system. The top hat adaptor screws to the muzzle and shows an interrupted, buttress-type thread that allows it to slide on and a quick 60º turn locks it on solid. I like QD systems and that is now on my short list, plus you can get a radial muzzle brake to fit instead. Given the original LSR was not threaded, the option to go ON or OFF was attractive on this second iteration.

Scope-wise, I was not looking for a big optic, as they can be a bit of a trap that we have all fallen into. The original glass on my LSR was a Leupold, VX2 3-9x50 on a 1” body tube and that could reach out as I have illustrated. Since then, it’s had a Mil-Dot reticle fitted, along with tactical turrets and is over 20-years old, but still top quality, but does not get a lot of use. A second option is another old timer, my Kahles CT 3-10x50, again on a 1” tube and with a Mil-Dot ret. It was the one I took to Africa in 2005 for the first time on my Winchester Model 70 in 270WSM. Both light, compact and quality designs and ideal for my needs.

Mount-wise, I was not looking for a one-piece Picatinny rail. From the box, the Remy came with Weaver bases, which proved solid; so, all I needed to add was some low Warne spilt rings, although rummaging around in my spares boxes revealed a pair of the Leupold, 1” turn off mounts and rings from the LSR. The Kahles got the nod in the end as I don’t like, non-locking tactical turrets on hunting scopes and it would be ideal for hunting out to sensible ranges, as before.

If I have one criticism of the Mc3 Tradition stock, the length of pull (LOP) is a tad short. But they do a 6 x ¼” spacer kit and, as I discovered, a detachable box mag (DM) conversion using an MDT 10-rounder. Both of these items are being imported by Raytrade. The spacer kit is essential, but I’m still mulling over the feed system. As standard, this rifle comes with a floor plate magazine, so you fill from the top and, if you want a quick unload, you pop the plate and the rounds fall out. I’m a bit out of practice these days, as most of my guns are drop mags, but the question is, do I really need a DM? If I go for it, it will have to be fitted, as it’s not a drop-in like the Legacy Sports option. Convenient yes, essential no, we shall have to see! A final item would be a sling but mounted on the left side of the stock in QD cup sockets and not underneath. Great for carrying, but in a stalk, they can be a hindrance, so nice to take ON or OFF as required, like the Javelin bipod.

So, that’s it for now, the ball is rolling and the project will start to gather momentum. Things might well change a little, I might think about a new trigger, but and like a DM magazine system, these will be considered once the rifle is up and running. I will doubtless be reloading for it and my thanks to Henry Krank for supplying a Lee Ultimate die set and 100 virgin Starline cases. But the bottom line is I will have a 308 LSR again and I can’t wait!