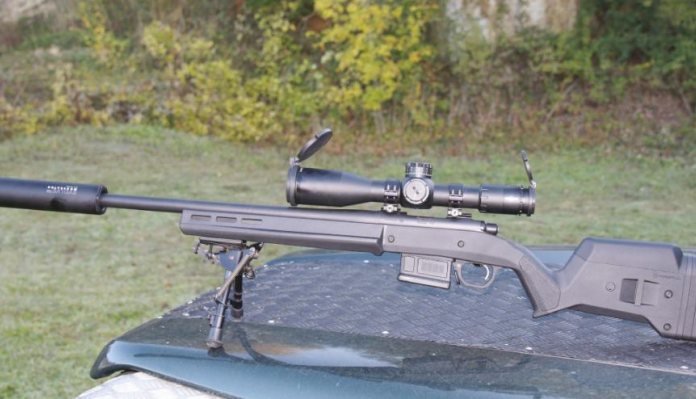 Last year, I had the pleasure of testing Remington’s 700 GEN II rifle, with their 5R rifling in 6.5 Creedmoor in a 24” medium/heavy fluted tube and HS Precision Hunter stock. No real surprises, as the old 700 is very much a known quantity and has the ability to shoot, as I can attest to. However, the GEN II’s capability to produce near calibre-sized groups with Norma 130-grain Match was still most gratifying.

Although a well fettled rifle with the heavy/ fluted, free-floated barrel and pillar bedded action, which is a recipe for success in any book, I also put a lot of its potential down to its 5R rifling form. This differs, as it has an odd number of lands and grooves (five in this case) that have tapered sides. The idea is that the bullet is deformed less than it would be by the more conventional 6-land form with its opposed lands. Also, it’s easier to keep clean, as there’s less build up of fouling in the hard to reach corners of the rifling.

On test, this month, is Remington’s 700 5R Magpul Hunter, though the heavier and shorter, 22” tube and detachable box magazine system along with the stock puts me more in mind of a light tactical build. But you decide, all I know is that the proven rifling form, the 6.5 Creedmoor chambering with a practical piece of furniture all combine to make one hell of a shooter. The good news, is that as well as Norma’s 130-grain Match load, importers RUAG AmmoTec also sent me their 130-grain hunting load using a Swift Scirocco ballistic tipped bullet.

The action is, well, a 700 with its twin-lug bolt and ‘three rings of steel’ lock up. The bolt handle has an extended/tapered knob for easier operation. The safety is a 2-positioon rolling lever, rear/right of the action and well placed for operation by the firing hand thumb with little disturbance to the shooting hand position. Push forward for FIRE and reverse for SAFE; in this position, you still get bolt operation. The trigger is Remington’s new X-Mark Pro Externally Adjustable type, which replaces the original Walker design. There’s a small grub screw at the top of the blade that alters the weight.

In the case of this model, feed is from AICS (Accuracy International Chassis System) – spec magazines (1 x 5 rounder included) in Magpul’s mag well conversion; though saying that, standard, 700 bottom metal will also fit if you buy the Hunter stock seperately to upgrade your own rifle. The bolt release is a flat, push-up plate inside the trigger guard. The plain, 22” barrel shows the 5R rifling form and is threaded 5/8 x 24 UNEF with a protector at its 0.862” muzzle. The finish on all metal work is black Cerakote.

This is one of those reviews where the furniture Remington picked for this model deserves more than a line or two. Though saying that, the proven 700 action along with the new furniture combine to make something seriously shootable, as we shall see. When I first saw the Magpul Hunter stock, I did not like it, quite heavy at 3.2 lbs and seemingly bulky with a sharply angled and long pistol grip I was underwhelmed. But as I learnt long ago as a novice gun writer; don’t judge a book by its cover, nor let your unconfirmed thoughts on paper; make you look a fool!

Made from reinforced polymer with an internal, anodised aluminium bedding block, the Hunter is a heavy rifle at 9.4 lbs bare-backed and feels more tactical or precision than lightweight. It accepts factory Remington barrels and is compatible with aftermarket profiles up to a Medium Palma (0.920” dia. 5.50” forward of the breech).

The long forend is rectangular in section, that tappers inwards slightly past the centre line and is rigid and free-floats the barrel nicely. Up front are M-Lok slots; three either side and two on the bottom for accessories, I fitted Magpul’s Harris bipod adaptor. There are dimples that act as drilling guides should you wish to fit a QD sling stud (two up front one at the back). The grip and butt area is ambidextrous and the 60⁰ raked pistol grip is textured and positions the trigger finger nicely in the over-sized guard. The butt is deep and features adjustable length of pull (LOP) giving 13 – 15” with four spacers and a thick rubber recoil pad. Also included are four different height combs (cheek risers) 0.00, 0.25, 0.50 and 0,75”. Left and right are 1 ¼” Footman’s sling loops and QD, ambi cup socket adaptors. The under side is cut away to offer a vestigial gripping hook. Though available for short and long action 700s, the Hunter is only configured for right handed rifles.

The Magpul box mag conversion is all polymer and has an ambidextrous, T-shaped release catch at the rear of the well, integral to the trigger guard. It comes with 1 x 5-round mag, but they also offer a 10-shot too. The trigger is the new X-Mark Pro Externally Adjustable model, that replaces the previous Walker unit. Remington says this about it: ‘Breaks like glass, has virtually zero creep and offers a level shot control unmatched by any factory trigger today!’ The rifle will also accept most factory and aftermarket mechanisms too.

Overall, the rifle comes together well and offers a reasonably compact and handy, although heavy, package. Fully bombed up in a more tactical style, with a tactical scope, mounts, bipod and moderator adds on an average of 4 lbs, my example was tipping the scale at 13.75 lbs. Currently Remington offer this model in three short action calibres – 308 Win, 260 Rem and 6.5 Creedmoor and one long action – 300 Win Mag.

I rigged the rifle with a Harris BRS bipod (6-9”) leg adjustment and cant, with a Magpul M-Lok adaptor, a Minox ZP5 3-15x50 tactical-type scope in first focal plane in Sportsmatch 34mm mounts and one of the new Evolve reflex moderators that Raytrade is importing. It came with a set of two- piece Weaver bases, which proved adequate, though I’d probably fit a one-piece Picatinny with 10MOA of down bubble for longer range use.

Given the sort of use this gun is likely to be used for, this is the build most shooters I feel would opt for! Ammunition went to two loads from Norma; their 130-grain hollow point boat tail (HPBT) Match and the hunting 130-grain Swift Scirocco II, which is a high performance ballistic tip (BT) design. It shows a bonded core for good weight retention and, with a ballistic coefficient (BC) of 0.571 in the 6.5mm version, it’s got good, longer-range potential.

As I said before, the rifle feels generally good with a slick and smooth bolt-action system that shows no vices on feeding, extraction or cocking effort. The Hunter stock is a really practical design, so offers a great launch platform, and the 6.5 Creedmoor has become the new ‘IT’ calibre, very much in the last few years. Not mega quick but with high BC bullets more than capable out to 1000m. If I had one niggle, it was the trigger; a good break but a bit heavy and not a lot of difference when adjusted either. Remington have achieved their aim by making a safer mechanism than the Walker system offered, but down behind the rifle it just feels a bit too firm and takes a bit more concentration.

Saying that, the gun shot brilliantly, as did the Gen II 5R before it and I was not surprised. Truthfully speaking, it was producing near calibre-sized groups, providing I did my bit. Check out the DATA SHEET on performance, but the Norma Match was tight at 8mm and their Swift Scirocco load was coming in at under 10mm. These figures were achieved at 100m sitting off a bench with the bipod up front and a bag under the butt and for what is a factory model this is extremely good! I was surprised that the Scirocco showed a significantly higher ES than the Match load. Most notable is the difference in velocity between the 22” and 24” barrels as the Gen II with the Norma Match load was producing a creditable 2940 fps for 2505 ft/lbs. In a perfect world I’d have the Gen II in the Magpul stock!