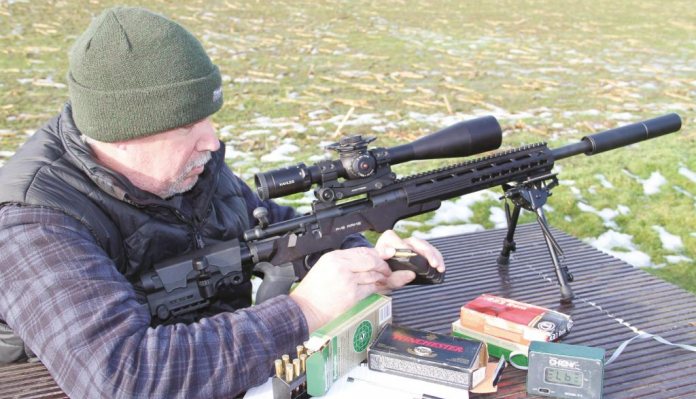 The Remington Model 700 series has become an industry standard as far as reliability and accuracy are concerned and continues to evolve. With ‘Tactical’ being the current buzz word, I decided to look at their new latest with adjustable aluminum modular stock. The SPS Tactical comes standard in Hogue, rubber over-moulded furniture, but on test is one fitted with an A B Arms Mod-X Gen 111 model, which gives great looks and shootability. I opted for the .223 Rem with a fast, 1-9” twist rate barrel, which will support a wide range of bullet weights.

The stand-out feature of this model is the stock, so let’s start there? This is a modular system that is available in fixed or folding configurations and is a simple, bolt-on option offering a fully-adjustable, shootercustomisable build that looks cool too!

There are six components: chassis/frame, pistol grip, scope mount, forend, butt and AR15-style buffer tube and made from aircraft-grade aluminum for strength and lightness. It comes with all the relevant fittings, so totally DIY.

With the barreled/action bolted into the frame, attach the scope mount to the receiver bridges, then slide on the 11.5” free-float forend, which is retained by two bolts at the bottom. It butts up to the Picatinny rail on the scope base, to give an uninterrupted mounting length of 17.75”, the forend is ventilated and shows K-mod slots at 3, 6 and 9 O’clock for mounting light and lasers etc.! The buffer tube screws into the rear of the frame and is retained by a castellated nut. The butt is adjustable for length of pull (LOP) in ½” increments, the butt pad is lengthadjustable by a push button. The recoil pad is thick rubber and grips the shoulder nicely.

The plastic comb/cheekpiece is heightadjustable by a thumb wheel on the right side. As can be seen, this allows the individual to tailor the rifle to themselves for the best shooting position, as to LOP and head/eye scope alignment. This is the beauty of any decent chassis system and probably why they are so popular too! This AR15 configuration extends to the pistol grip too, which in this case is an Ergo Grip, but could be substituted for anything that fits a black rifle!

Feed is from a synthetic, 10-round, detachable magazine with a single column, central feed position, which are AICS (Accuracy International Chassis System) interchangeable. The release button is sited in the front section of the trigger guard. Overall finish is a tough hardened anodised satin black, befitting a true Tactical design.

The receiver is your typical Model 700 short action, overall finish on this Tactical model is a tough, scratch-resistant satin black oxide. The bolt locks by twin, opposed lugs that engage in the receiver, with Remington’s famous ‘three rings of steel’ build! On inspection, the rear of the bolt lugs where they contact the locking abutments showed good overall contact and wear, so indicting a true and consistent engagement so maximising accuracy potential. The semi dog-legged and flattened bolt handle and 2-position safety (forward FIRE, rear SAFE with bolt operation) remain unchanged, as they work. The latter being positioned rear/right of the action and easily operated by the firing hand thumb. The metal bolt shroud remains as before and is still better than most!

The trigger is vastly improved over older models, now being the X-Mark Pro unit that is adjustable. If you want more, then there are loads of after-market drop-in kits to choose from, as that’s the beauty of a Remy 700. The trigger performed more than adequately, as the accuracy tests showed. This one broke at a clean, single stage, non-creep but heavy at 5.25 lbs, practical but a fine tune would help!

Finally, the short but stout tactical barrel. At 20” it’s a perfect size for this model that shows a 0.835” muzzle diameter with little taper and was threaded 18x1mm. This means a rigid profile that should be less affected by heat build-up, so aiding accuracy and consistency. In truth, 20” is good enough for a compact 223 Rem and keeps the overall length short with a moderator fitted for easy handling. On that point, I chose the superb MAE Scout, this reflex design complimented the build nicely.

As the rifling twist is 1-9, it should handle most bullet weights from 40 up to 75-grains, which the range test would confirm or not. The heavier pills would be used for a spot of longer range use, where the better ballistic coefficient value (BCs) down range would make it for small species deer a viable heavier hitter, although the Tactical stock might raise a few eyebrows.

Handling was good, as the balance is correct, even with a moddy and scope fitted. I used a Kahles K10-50x56mm scope, which is large but a superb optic for precision shooting. The rear butt section sits solidly in the shoulder with minimal recoil and enough adjustments so that an offhand or benched shot will fit your position correctly.

Starting with factory ammunition, I tried some Remington 50-grain Accu-Tips. These gave a healthy 3219 fps average for 5-shots over the chronograph, for 1151 ft/lbs energy and achieved some nice sub-1” groups, good start! Winchester 50-grain Silver Tips produced 3075 fps/1050 ft/lbs, with 0.75-1” 100-yard groupings at temperatures hovering around 0°.

Upping the bullet weight a tad, I switched to some Geco 56-grain soft tip loads, which have proven to be a nice Scottish Roe and small species deer cartridge. I had a velocity of 3148 fps for 1233 ft/lbs, which is pretty impressive as too were the groups, all hovering around the ¼” mark. The heavier Remington 62-grain Match bullets were up next, and these shot 2904 fps velocity for 1161 ft/lbs and again at just under the inch mark. When you consider that these are factory loadings, that is good shooting in anyone’s book.

Next up, were the reloads that hopefully would shrink those groups a tad more? I started with some light 40-grain V-MAX, always a good, fast accuracy bullet, but you do have to be careful with over rotation in a fast twist barrel. At .223 speeds, I was OK though and achieved sub-1” groups with a load of 24-grains of Vit N120 powder, Federal Match primer (small rifle) to achieve a velocity of 3415 fps and 1036 ft/lbs energy. Switching to RL 10 X powder, 24.5-grains with the same primer produced a healthy average speed of 3387 fps, slower but good 0.65” groups.

The 55-grain bullets, i.e. Sierra Game Kings transcend vermin/fox and deer and with 23.5-grains of Vit N 133 you get 3166 fps and 1224 ft/lbs, with 3-shots into 0.55”, nice. Upping the bullet weights to the fast twist level, I shot some Berger 70-grain Match VLD (very low drag). These need a good seating depth to achieve best accuracy and often a shorter cartridge overall length (COL) too; here, a deeper seating depth is beneficial. A load of 23-grains of RL 15 powder is good but a little medium burning in a short barrel but achieves 2846 fps and 1259 ft/lbs for 0.75” 100-yard groups. The 75- grain bullets were good and a load of 22-grains of Vit N140 or 20.5-grains of of Vit N133 achieved similar results with Hornady A-MAX or Berger Match Boat Tail bullets and 0.75” groups. Berger 80- grainers were about the limit of stability in this barrel and a 1 in 8 twist would stablise these better! But I still had just shy of inch groups with a load of 20.25 grains of Vit N 133 powder for 2588 fps.

Other than a few stack poled rounds from the magazine when I worked the bolt too slowly; you need to be aggressive and positive with bolt movement, this little Remy shot like a dream. I like the short, stout barrel that was accurate with the loads tested, factory or reloads it did not matter! The Tactical stock was versatile with plenty of good features and that full-length scope mount is very handy for any length of optic or NV attachment. Whether you opt for the original Hogue stock design, or this Tactical stocked version, it’s good to see Remington back in the shops again.