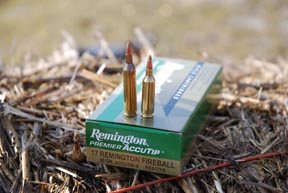 I’m no stranger to Remington’s SPS range of rifles, which were initially the replacement for the old Remy 700 ADL synthetic. From this basic hunter the range has grown to cover a number of needs, perhaps the most interesting being the Varmint.

The gun looks a bit different as to my knowledge it’s the only model with what might be termed as a medium/heavy, factory-moulded stock. Usually on Varmint-type guns the furniture is either laminate, fibre glass or similar in a big, rigid build for added stability. The SPS does this with a far cheaper moulded design, with a sporting-style butt and a large/wide forend.

The forend is vented with three slots either side and the 26”, medium/heavy barrel is free floated but shows pressure beds at the front of the channel. This means that there are two, raised sections that it physically sits on; I have always wondered why they bother, as it seems to fly in the face of the free-float principle? The muzzle is threaded 5/8x18” but other forms are available to order and comes complete with a protector. Remington have fitted two QD sling studs up front and one at the rear along with textured panels to enhance grip though the ones at the forend are a bit far back. However, it would seem unlikely that this rifle is ever going to be used free-hand…

The butt shows a low, straight comb with a marginal cheek piece. However the line comes up well and you get good cheek weld and a comfortable, eye/scope relationship. At the rear is a thick rubber butt pad. The length of pull is 13 3/8” and combined with the shallow pistol grip angle gives a comfortable firing hand placement and an easy first pad, trigger finger position. From the box the trigger is not bad breaking at a firm but crisp 4-5 lbs, not light, but workable and like all Remy 700s, easy to adjust.

There are no real surprises on the Varmint apart from the fact it’s now available in a left hand option. What is really different is the calibre, as Remington has added their new 17 Fireball to the line up. In truth this is the more interesting part of the test, though the SPS is a decent rifle with a deal of potential.

Who Is The Daddy?

I say new, but this cartridge is very similar to the O’Brian Rifle Co’s 17 MACH IV (4000 fps), which first saw the light of day in the early 1960s not long after the launch of Remington’s original 221 Fireball, which it appears to take its inspiration from. Ironically the introduction of the hotter 17 Remington in 1971 pretty much wiped out the MACH IV. So it now looks like history has repeated itself with a copy of a modified copy of an original; a fact that Remington freely acknowledges…

The 221 Fireball is in itself an interesting cartridge, made from a shortened 222 Remington case it was originally designed for their XP-100, bolt-action pistol. Essentially a Remy 700 short action this handgun was a lot of fun to use on prairie dogs as I recall.

These small varmint calibres are very popular in the USA who have a lot of critters to shoot and an industry based around hyper fast, light/frangible bullets in high accuracy rifles. In the UK we are a bit more constrained, as we don’t have massive prairie dog towns to go and ‘brass up’, so cartridges like the 17 Remington when it arrived were treated with some caution.

The small amount of dedicated varminters naturally took to the 17 Rem and it proved an effective if a little exotic calibre, much like the 204 Ruger is today. Though accuracy did suffer unless you adopted a regular cleaning regime and with such a small bullet wind is always an issue! The problem was the 17 - though fox capable at a push by a good shot - was not really the answer! After a brief spell of popularity you saw lots of 17 Rems in the second hand gun racks, today though not extinct it’s not top choice either.

The 17 Rem is now 38 years old by my reckoning and in that time propellants have improved in respect of more efficiency and less fouling, likewise case design has come on too. So Remington decided to re-vamp their old 221 Fireball in 17 calibre and though visually identical to the MACH IV takes advantage of modern technology.

Comparisons to the old 17 Rem are unavoidable, as is its reputation in the UK, so you might think, why should I buy into this smaller 17 when the old one was not a massive success? To be honest you would be correct, but let’s take a closer look. To be fair you have to judge any calibre on its merits. The 17 HMR (Hornady Magnum Rimfire) is a good example, I have killed a lot of rabbits and hares with it out to a realistic 170 yards in good weather. I have also killed a few foxes but at much shorter ranges and generally used two shots to put it down and stop it moving. So for me it’s not a primary fox cartridge!

204 Ruger is similar and again I have killed foxes with it but mainly use it when the range is too much for my 17 HMR. On rabbits, hares and crows etc. and it’s sweet. But if I’m after Charlie then I reach for my 223 by choice.

We must also not forget the 17 Fireball has been made for a real varminting market – the USA, where they talk the talk and walk the walk on this subject. As a 20-grain V-MAX-type doing a quoted 4000 fps is going to be a sweet little performer on prairie dogs etc.

Running both 17 Rem and the new Fireball (17 FB), firing the same 20-grain bullet over a ballistic calculator using Remington factory figures, shows the former is the better cartridge in terms of velocity and energy at all ranges. For example check out these muzzle figures:

Out to 300 yards, which I consider getting on for maximum range with either calibre it looks like this:

However and given we are shooting rabbits etc then the 17 Fireball still hits with near three times the muzzle energy of a 22 sub-sonic at 300 yards, so as long as you put the bullet in the right place – no problems… Remington make a big thing of the Fireball’s reduced recoil over the 17 Rem, but in truth both are marginal in this area anyway. Pulling a few rounds of Fireball shows an average charge weight of 19.4-grains of what looks like Hodgdon BLC2.

What is interesting is the case form, as the Fireball looks like a mini WSM (Winchester Short Magnum) with its wide/short body and reasonably steep shoulder. At the risk of sounding daft; you could get away with an even shorter action than the 17 Rem, which is reflected in the SPS’s magazine placement, which is fully forward. This would be good and offer a really sweet little rifle too.

The above data is from Remington who say that the 17 Fireball will do 4000 fps with the 20-grain load, so time to see if this was true. Well not totally, as results over the chrono gave 3875 fps/666 ft/lbs, so around 125 fps shy of the mark and that was from its 26” tube. I also get the feeling that cutting the barrel down to a more manageable 24 or 22” would be counter productive too!

I fitted the Varmint up with a Nikko Stirling side-focus, 6-24 x 56 Nighteater scope. The only two variables apart from the ammo would be the trigger and fouling build up. The gun would be shot rested so I could pretty much dial out the heavier pull. Plus I cleaned it prior to use and took my 17 kit with me to see if it would need a dig out before my ammo was gone.

After a few rounds to get the feel of the trigger, groups shrunk from 3/4" to ½”, which was pleasing. I have no doubt they would go SUB – ½” with a bit of adjustment. Recoil and report was very mild and fouling did not seem to be an issue for the 40-rounds I fired.

It occurred to me that with such a flat shooting gun I could extend my zero point to give me a near one point of aim hold out to 200 yards. Feeding in the data to Sierra Infinity showed that with a 175-yard zero the gun shot approx ½” high out to 175 then dropped ½” below point of aim at 200. At 300 this gives a drop of 6.4”.

I have no complaints about the SPS Varmint, as it’s an effective rifle for the money and a nice place to start for a budget varminter. However, given the boom and bust nature of the 17 Rem here in the UK, I’m not sure that a less powerful version is going to get you that excited.

Like all the sub .224” small varmint calibres the 17 Fireball is very dedicated and certainly not a primary fox buster! As I already own a 204 Ruger I would not switch to it, but if I was looking for short/medium range small varmint/corvid basher then it would be worth a look.

We reckon:
• Do we need another 17 centrefire?
• Well behaved and potentially accurate
• Ammo a bit expensive