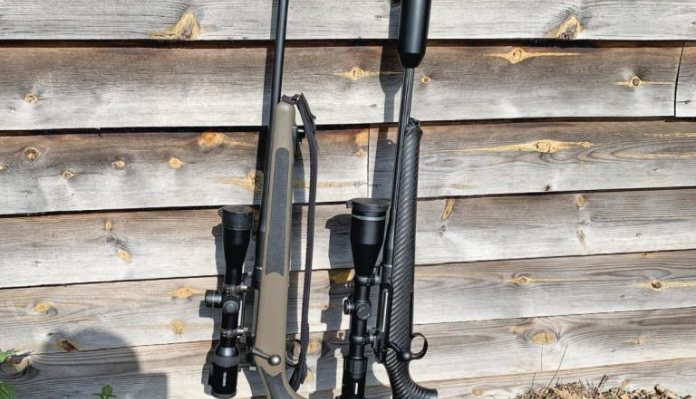 Sauers’s 101 rifle was a bit of a surprise to us all, prior to the launch of the latest Model the 404, their 202 ruled the roost for many years. It was a switch barrel/ calibre and in the same class as Blaser’s R93, then R8, plus Mauser’s M03. At one time it was the most popular hunting rifle in Europe, and I never really liked it! No real reasons, some things just don’t float your boat.

Tip of the iceberg

Around 2012/13, Sauer announced that they would be offering a new and cheaper model, which raised a few eyebrows. Mauser followed with the M12, which in terms of design and manufacture was near identical, with shared areas like barrel retention and, feed system, with only peripheral controls and looks showing a difference. I have one of their later models on test; the Highland XTC, which is different as it wears a carbon fibre (CF) stock. I’m fully aware of the benefits of this material; lightweight, strong, and rigid, but two things have always put me off. First the price and second, I always thought it made some guns look like toys, and I still feel that way, but recently I tested Blaser’s K95 Ultimate Carbon and found the material much more visually acceptable and equally so with the XTC.

Closer inspection shows where the 101 design rethought the concept to doubtless make it easier and cheaper to produce. Though not instantly obvious; the biggest departure from the norm is how the barrel is retained. Traditionally the chase (parallel chamber section) is threaded as is the receiver and these two components screw together.

Instead a ‘tension-free, HEAT LOCK process’ is utilised. The chase is an interference fit (marginally larger than the receiver socket), here the front of the action is heated, and the barrel inserted. When the metal cools and shrinks it grips the tube solidly, an anti-rotation pin is used to maintain the orientation. Different true, but given the quality of Sauer barrels in general, which is extremely high, the 101 has always proved to be a real shooter in any version.

There’s no traditional, fixed recoil lug, instead something called EVER REST bedding. Here a large square alloy recoil block is bedded into the front of the stock’s action void. Pins in the underside of the receiver mate with holes in the block with the forward screw passing up through it. As before it’s then bolted front and rear.

There’s little denying that the 101 follows the 202 to a degree in basic receiver shape and length. It’s long action only to accommodate all calibres, and the 5-round (four in Magnum calibres) uses a filler block to adjust the various cartridge overall lengths (COLs). The ejection port is larger, so single loading is easier. The Highland shows a fluted, 6-lug bolt with twin, sprung plunger ejectors, which really kicks the brass out, which is nice. The handle is angled back and finished with a polymer ball end and in use gives an easy, 60º lift angle, which cocks on opening. Visually, there’s a cocked action indicator pin at the rear of the shroud. The 101 uses a traditional ON/OFF safety located at the rear of the bolt shroud. It’s called the DURA SAFE, it looks like the de-cocker on a Blaser R8 but is not. There’s a sliding catch locked by an integral button, to set to FIRE push it in and forward (red dot shows) and reverses for SAFE. In this position, the action is locked, but a button to the rear of the handle (SAFE OPENER) allows it to be opened giving a safe method of unloading. Being positioned almost on the tang, the system is instinctive and fast to use with little disturbance of the firing hand position.

Sauer is renowned for their barrels and the 101’s are cold hammer-forged and the Highland offers all the usual lengths: 18, 20, 22 and 24”, all fluted. On test was the little 18” with a 15x1 thread. Visually, I love the compact look, which makes this model weigh just 5.5lbs bare-backed. By comparison, a wood-stocked 101 Classic is 6.75lbs. Handy and extremely cute, but would there be any penalties in terms of speed and energy?

The CF stock is an absolute peach of a design, the simple, ambidextrous layout shows a nicely angled and full pistol grip, a 14.5” length of pull (LOP) plus offers a light free-float to the barrel. Of note is the butt comb that angles away from the head, which in recoil makes it more comfortable.

The forend shows a midwidth tapered build with a semi-Schnabel tip. Sling swivels take the form of QD sockets under the butt and in the nose of the forend, so no QD studs. Instead, Sauer uses a spigot adaptor that plugs into the nose and takes what looks to be their version of the Spartan 300 bipod, which I believe was developed for them by the company.

All the metalwork is finished in Sauer’s Diamond-Like Carbon (DLC) surface, which is tough, rust and wear-resistant. Visually it’s a pleasing dark grey! The trigger shows a broad, curved blade set in a well-sized guard. It comes factoryset at 2lbs plus offers a great feel and crisp break, which was ideal for me. The 5-round, polymer magazine sits flush and is controlled by a forward-mounted catch.

So far, so good! Overall a very pleasing layout, fast handling, great trigger and light even when fully bombed up. I have to admit that I could easily see one of these in my armoury; like I have not got enough guns already!

My example was in .308 Win, certainly a good choice for the short barrel, as I feel numbers like .243 Win and 6.5x55 SE could suffer badly on velocity and terminal energy in this format. The test was in two parts as I initially used standard ammo in the form of Hornady 165-grain Wild Boar (non-lead), RWS 136-grain EVO Green (non-lead), RWS 165-grain Doppelkern (DK), Norma 170-grain TIP STRIKE (TS) and Lapua 150-grain MEGA.

With the seeming trend for shorter barrels, certainly in Europe, manufacturers are turning their attention to ammo, purpose-designed to give maximum performance in these tube lengths. As luck would have it, importers RUAG Ammotec UK sent me the new RWS, Performance Line, HIT, Short Rifle (SR), 150-grain, non-lead loading. The bullet appears to be a Barnes’s-style, monolithic, tipped copper hollow point. A comparable standard velocity load was Norma’s (also non-lead) 150-grain ECO STRIKE (ES). I was initially dubious about the claims made by the Short Rifle.

First impressions of the Highland are an exceptionally smooth shooter, with none of the snap of a .308; OK the moddy helps, but that stock plays its part too. Feed and function were 100% and it proved to be an accurate, handy, and very shootable rifle, which offered an easy carry for longer stalks

Figures, as always are interesting, as they show up the differences in what seems to be similar ammo types and in this case barrel length! 1” groups at worst are particularly good, but the Short Rifle really did the business in terms of speed and energy and would be my first choice. In terms of practical hunting ranges the RWS Short Rifle does not drop below 1700 ft/lbs until 290 yards, which is impressive. A clear second was the ECO STRIKE, another great choice. And for the heavier option TIP STRIKE would take some beating. To be honest, any of the loads tested would do the job, but more thought would have to be given to barrel length.

Great rifle and practical design no doubt, and I feel enhanced by the carbon fibre stock, but you do pay the price, which is a decision only you can make.