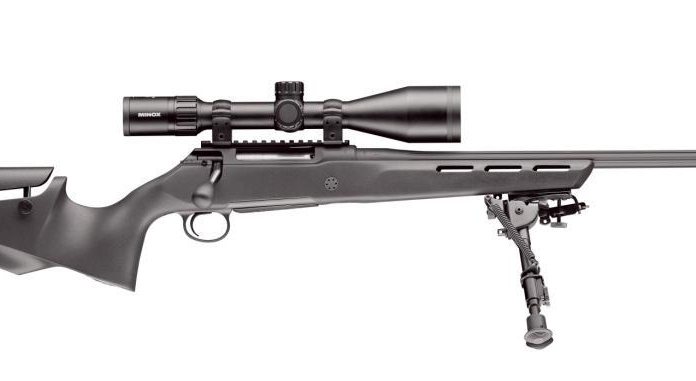 To be frank, I’ve never been a big fan of SAUER rifles; the classic 202, good gun I admit, but not for me, the 404 over complicated and over-priced; come on who really needs that 4-weight trigger? The 101 a good idea and design, but with features I don’t like. Don’t take it personally, as I’m simply stating my case honestly. And just before you get the pitchforks and flaming torches out and march on the magazine, I really like their S100! It’s a simple and practical design lacking nothing in terms of shootability and well-priced too. And from what started off as an apparently, budget/utilitytype rifle, the range has proved to be a lot more than that.

You only have to use the S100 Keeper, a UK-inspired design conceived by Robert Sajitz CEO of the UK, Blaser, Mauser, Sauer Group importers Blaser Sporting Ltd to see where you could take this seemingly humble sporter. There are now seven options, from basic, synthetic-stocked hunter up to the brand new Pantera and FIELDSHOOT, the latter of which is the subject of my attentions this month, though it could equally be the former, as they are very similar in design and ethos, as we shall see.

Like any modern production rifle, given the action is sound and the controls sensible, then it’s only a matter of innovation and considering barrel-length/ type, calibre and stock options to produce something special. The idea of the FIELDSHOOT can be traced back to the American concept of the Varmint/Target (VT) rifle perhaps best typified by Ruger’s original M77 VT. In that you have a gun with a heavier and long enough barrel (always important for best ballistics) and adjustable stock to give that accuracy and performance edge, yet be light enough to carry, compared to a full-blown precision/tactical machine. It’s not rocket science, but the idea is valid and has produced many great, multirole rifles over the years.

There’s no doubt in my mind the S100 action is a strong, reliable and proven design and unlike its older brothers’ the S101 barrels are screwed in and not shrink fitted and pinned, plus it has a simpler and more practical safety system. The steel receiver is long-action only, with the large, 3-lug bolt locking into abutments in the receiver and not the barrel. A large ejection port allows enough access for single loading and getting your finger in if required. Feed is from a flush-fit, polymer, staggered column, 5-round box magazine (standard calibres) and 4 in Mini calibres, in this case just read 223 Rem. Cartridge overall length (COL) is taken up by a filler block at the rear of the mag. The release button is forward of the well and nicely recessed, though access with heavy gloves on might be a bit tight. The bolt release is rear/left of the action.

The safety is nice and practical, with a 3-position lever, rear/ right of the action, it pushes forward to FIRE (red dot), pulls back to the middle SAFE with bolt operation (first white dot) then full back (second white dot) for SAFE with locked bolt. It’s easy to operate with little disturbance to the firing hand position. At the rear of the bolt body is a cocked action indicator pin, marked in red, it can be both seen and easily felt too.

The bolt has a large and extended, tactical, coned alloy handle and offers a short 60⁰ lift angle and the action cocks on opening with little effort needed. Like the 101, the S100 has twin plunger-type ejectors, which really power out the empties, even with slow operation. The trigger blade is well curved and wide and offers a comfortable feel with an easy first finger pad position provided by the set back and scalloped pistol grip design. The weight is adjustable from 1000 to 2000 grams (2.2 to 4.3lbs) by an Allen screw inset into the top of the blade. The break is crisp with minimal movement and even when wound down to minimum it’s still easily controllable.

The front and rear receiver bridges are drilled and tapped for basic two-piece bases or the SAUER HEXALOCK mounts, which offer a QD facility. But Robert decided on fitting a one-piece, 10 MOA Picatinny rail like the one on the S100 Keeper. Made by Barton GunWorks, it’s also used on the Mauser M12 Impact and offers probably the best mounting solution for a rifle of this type, as it also makes fitting NV and thermal optics simple too!

The barrel is 24-inches long and of heavy build that tappers from 28mm at the re-enforce to 22mm at the concave muzzle, so we can assume a rigid tube. This example was un-threaded, which as I discovered is not how they will come for our market, as Robert is aware that European guns aimed at the UK must offer the ability to fit a moddy and production versions will. Just guessing here; but looking at that 22mm muzzle, I’d say an 18x1mm cut. Calibre-wise my tester was in 308 Winchester, but the FIELDSHOOT range offers the following options: 223 Rem, 243 Win, 6,5x55 Swedish, 6.5 Creedmoor, 308 Win and the latest creation from Hornady the 6.5 PRC (Precision Rifle Cartridge).

The PRC is essentially a Short Magnum case based on the Ruger Compact Magnum (RCM) that offers a sort of Super Creedmoor ability. Will Westlake (Barton GunWorks) has promised me a custom gun in about three months’ time to see what this new calibre is all about. Figures indicate speed and energy figures of 2900fps for 2782ft/lbs at the muzzle, with a 143-grain ELD X bullet from a 26-inch barrel. The 147-grain ELD Match is quoted at 2910fps/2764ft/ lbs. OK, you might lose a bit from a 24-inch tube but it will still give a significant advantage over the Creedmoor for longer range shooting needs.

So, with a good barrelled action etc. what’s the furniture like? You get a brown laminate stock with a wide/flat, slightly tapered forend with ventilation slots and twin QD sling studs are fitted up front with one at the rear in the butt hook. The butt is a profile-type with a cut-out gripping section and a scalloped and dedicated right hand pistol grip. It fills the hand and flares at the base and is well chequered for a good grip, that gives a nice vertical and thumb-up position and good reach to the trigger. There’s a slight cheek piece and the comb is height-adjustable. There’s a curved, rubber recoil pad that is also height-adjustable, which allows you to fine-tune your shoulder position. The LOP is a generous 14-inches, but is not adjustable, which I thought would be mandatory for a rifle like this! However, it fitted me well, but might be a bit of a stretch for those with smaller statures.

The action sits in the stock using SAUER’s EVER REST bedding system, with a recoil block that engages in a forward pocket, an extended stud passes through it from the receiver and is secured by a nut coming up from underneath. The forend offers a slim freefloat to that big, rigid tube.

An alternative to the FIELDSHOOT is the S100 Pantera, with the same laminate stock but with a Black Cerakote Recon finish, which is also applied to the metal work. It shows a choice of 20- and 22-inch fluted barrels for both Standard and Magnum calibres accordingly. The barrel is slimmer and tapers to a 19mm muzzle threaded M17x1mm as standard. Calibre choice includes 223 Rem, 243 Win, 300 Win Mag, 30-06, 308 Win, 6.5 Creedmoor and 6.5 PRC.

The FIELDSHOOT was a peach to shoot, with positive, feed and ejection and the ability to tailor the butt pad and comb to your position is always a bonus. Felt recoil was good, certainly for a 308 Win. I wound the trigger down to 2.2lbs and it gave a sweet and predictable break, accuracy showed some promise too.

Given the proliferation of VT and similar type rifles these days, at around £1500 the SAUER FIELDSHOOT represents a good quality investment for mid to long range work on paper, steel or suitable live quarry given your calibre choice.