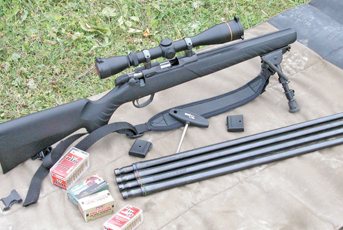 This Focus came by way of a mate who bought it, so I’m afraid he beat you all to it. The rifle is Sako’s QUAD, which is unique as it offers a switch barrel build that uses all current rimfire calibres – 17HM2, 22LR, 17HMR and 22WMR. This is achieved with four individual barrels and two magazines. Visually the rifle is a FinnFire, probably one of the most respected rimfires, now discontinued in favour of the QUAD.

My friend shoots an old CZ452 2E in 22 LR and was thinking of getting a 17HMR, also with a view to maybe trading in his CZ for a more modern 22. Walking into his local gunshop he saw what he thought was a synthetic-stocked Sako FinnFire on the 2nd hand rack in 17HMR. Result! On enquiring he found out it was a QUAD, so realised he could also get a 22LR tube and achieve his goal of rearming in one go.

On enquiring on price he was told that this rifle came with all four barrels, 2 x mags and the barrel change key plus a Leupold scope and box, but would only be sold complete. None of the barrels were threaded, which indicates to me this was an early model. He did not want the 22WMR and 17HM2 tubes, plus the hassle of getting a variation on his FAC for all four calibres. However, the shop owner was asking £750 for the lot, which was a bargain; it makes you wonder what he actually paid for it! The rifle was in good condition too and on inspection both the 17HM2 and 22WMR barrels looked unfired. The 22 LR had had more work with not a lot on the 17HMR!

After a call to his Firearms Licensing Dept who agreed to let him have all the required variations, and a bit of horse trading with the owner, he part-X’d his CZ and got the lot for £650. Given a new QUAD with four tubes etc less scope will cost the thick end of a grand it was a result. He also planned to sell the two extra barrels, as of yet he has not!

The QUAD is a clever design with only one minor niggle and is essentially a standard, turn-bolt rimfire action. Barrel change is achieved by undoing a single captive screw under the action, this allows a locking plate to drop and the barrel is then pulled up at an angle then out of the action. Barrel retention is achieved by a flat at 6 o’clock on the underside of the chamber section, which engages with the plate.

Sako mark the barrels on the re-enforce with coloured rings that match the calibres - 17HM2 – blue, 22LR – green, 22 WMR – yellow and 17HMR – orange. Likewise the magazines, which are cartridge overall length (COL) specific with the 17HM2/22LR clip having both blue and green dots with the magnums showing yellow and orange.

The minor niggle is the diameter of the scope’s objective used, as if it’s much over 40mm the barrel can’t be lifted up enough to be removed. No big deal as you can use QD mounts but if you don’t know and set up say a 3-9x50 then go to change calibres you will be disappointed unless you take it off. The Burris QUAD scope solves that problem as both elevation and windage turrets are colour-coded as to calibre, so all you do is zero each barrel and note the settings then return to them as required.

The real issue with the QUAD is the ‘kid in the toy shop syndrome’ as most people want it all, as was doubtless the case with the original owner. However, it’s near pointless as you only really need two calibres. For me it’s 22LR and 17HMR as they will give true sub-sonic and long range rimfire capabilities. To be honest 17HM2 is a non-starter and near extinct in the UK. It’s accurate enough at shorter ranges but badly wind affected and lacking in killing power without precise shot placement. 22 Magnum, nice round but I have never found it that accurate. But whatever you do with it and choose, the Sako QUAD is a great rifle and something that does not often turn up, certainly at the sort of money my friend paid.