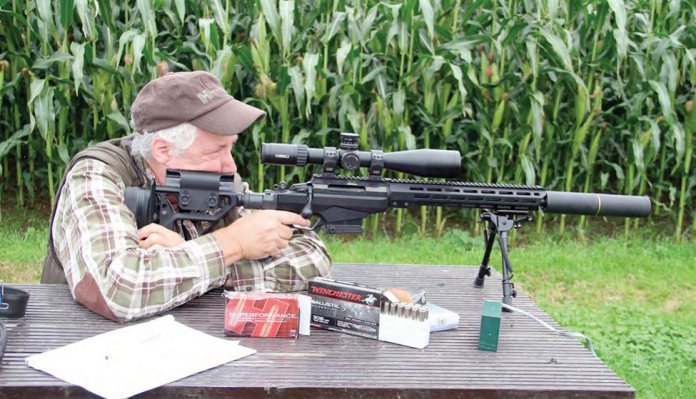 No sooner than I had packed up the previous Tactical rifle that I’d had on test and the Tikka T3X Tac A1 landed on my doorstep, again in .308 Win: so, back to the reloading bench and range.

I am a long-term Tikka fan, being that I still have my original Tikka LSA 55 in .308 Win that I bought at 17. This beast is a completely different kettle of fish, with no wood or polished blued exterior but still retaining that envious Tikka quality throughout.

The Tac 1 is a progression of Tikka’s new T3 and then T3X rifles from a ‘Varmint’ profiled Super Varmint rifle to the Tikka T3X Tac, with conventional synthetic, adjustable cheekpiece stock. Then, a full-blown, folding stocked, aluminium railed tactical version we have here, the T3X Tac A1. It has the feel of a well-built rifle; hey, it’s a Tikka! With folding stock, detachable ten shot magazine, more attachments and rails to hang all manner of kit off, this Tactical rifle has a lot to offer. It’s available in 308 Win, 260 Rem or 6.5 Creedmoor and in 20- or 24inch barrel lengths for civilian use.

That stock is nice! A true modular chassis system, it allows a myriad of options with your typical AR interface further allowing all manner of aftermarket options if you so desire to fit them. I personally think Tikka have got it spot on with this stock design, as it blends that ‘Tactical’ with a practical and comfortable adjustable shooting position.

The forend is long at 13.5-inches, with a 2-inch girth and your typical aluminium tactical vented rail system. This Tikka has the forend secured to the receiver ring mount by two Allen screws, so is instantly changeable for length or styles, as you wish. As such, the length is just right for this 20-inch barrel system, allowing enough gap between it and the muzzle to fit an over the barrel sound moderator, as with this Stalon here.

It’s a rigid forend that is designed to be sturdy but not heavy, with its thick gauge aluminium and M-Lok attachment system allowing bipods, rails, you name it, to be fitted at six positions along the sides and base. Best of all, is the full-length Picatinny rail on top; so, when combined with the same rail on top of the action, you have a fulllength mounting system, handy for forward mounted NV kit. Because of this though, there is no MOA slant but that can be taken up in the mounts anyway, as here with the Stalon mounts.

The second part of the stock is the central action bedding block. To this, the barrelled action is bedded, with a full aluminium bedding block; so, consistency is maintained in all weathers and rough use.

To this chassis is attached the AR pistol grip form and Tikka have fitted a lovely, tactile, soft grip of good proportions. It has a ‘soft touch’, with chequered panels and finger rest, so very secure and user-friendly.

Finally, the rear stock is again very well thought out. Its AR compatible again but this design suits me fine and there is no need to change. It is a folding system that locks to the left side of the rifle, so nice and secure, which is better than some other Tac rifles. Overall length (OAL) folded is 30.5-inches and extended is 41.5-inches. To fold, a catch is depressed on the left side, which allows the rear butt to swing, it is a lowered chassis system, unlike the in-line Ruger Precision Rifle system. The butt has an adjustable, rising cheekpiece, which is a bit thin for my liking but can be customised with a bit of leather or wrap to make it more cheek friendly. It rises 1.5-inches via twin knurled adjustment knobs that also allow a certain amount of cant too.

The buttpad has a large profile and is again soft for a good grip of the shoulder and is adjustable vertically. There’s a small Picatinny accessory rail just in front of it and the adjustable length of pull is achieved with the addition of spacers

The magazine is a detachable type that is popped from its mag well by a swivel type push forward realise catch. It has two panels on either sides that are easy to access with the thumb to drop the mag. The magazine itself is of steel construction, with a polymer base to stop rust when rested in the wet and has a staggered double stack construction, this holds ten rounds.

The trigger is typically Tikka, very good with a two-stage, adjustable for weight, pull from 2- to 4lbs, this one broke at 2.75lbs and was really nice and contributed to the good groups down range no doubt. The safety is unchanged from Tikka’s sporting rifles, being a two-way safety, ON or OFF with a separate push down and bolt open mechanism to remove a round from the chamber whilst on safe.

The barrelled action is actually the T3X Varmint profiled rifle in this Tactical stock and beds directly into the aluminium chassis system. The action has that lovely, smoothrunning twin locking bolt system that Tikka are famous for. The ejection is via a plunger type sprung bolt head sited unit and an extractor claw takes care of the cartridge manipulation and extraction. The whole action is Teflon coated for durability and a subdued appearance and the bolt handle has a large plastic Tactical knob.

The barrel is available in 16-inches (law enforcement only), 20-inches as here and also 24-inches. The 20-inch is the most practical, although I would like a 16-inch plus muzzle can suppressor, but that’s just me, to reduce overall weight that is 10.8lbs.

As the barrel is Varmint profiled, it’s stiff and fully floated obviously along its length, with a muzzle thread of 5/8 x 24 pitch and comes with a muzzle brake system, although a mod is preferable in my view.

This Tikka came fitted with a Stalon over the barrel suppressor system, which is a good noise reduction moddy in .308. It fits over the barrel and looks excellent on this type of gun, as it seems to flow with the forend profile and does not increase the OAL too much. Fitted, it is 45-inches long; without, it is 41.5-inches. This Tac A1 also came with Stalon mounts with MOA adjustment built in, sensible and a Steiner M3Xi 5-25x 50mm scope, both very good.

Being more sporting based than Tactical, I used my usual factory ammo and hand-loads for testing and soon found that this Tikka’s a shooter.

First up here, the Hornady 150-grain SST loads that shot a 2891fps velocity from the 20-inch barrel, which equates to 2785ft/lbs. At 100-yards, three shots grouped within 0.85-inches! That’s good for any factory ammo.

I had run out of my Remington Match ammo, which is a shame, as they are good!

I also shot some subsonic Lapua factory, which grouped three shots into 2.0-inches and gave just on the sub/sonic noise level of 1189fps for 628ft/lbs.

Reloads using A-Max and Sierra Match Kings suit this rifle better and the best loads were with the Hornady A-Max 168-grain bullets with a load of 46.5-grains of Reloader RL17 powder that achieved 2665fps and these shot 0.5-inch groups at 100 and tight 3.0-inches at 300-yards on the steel gongs.

The heavier Berger 210-grain bullets shot reasonably well but a tighter twist rate would be better, with 1.0- inch groups and 2403fps from 39.25-grain of RL15.

No doubt about it, the Tikka T3X Tac A1 is a formidable Tactical rifle, with one of the best designed layouts I have used, with Tikka’s superb build quality. Consistency, accuracy and overall performance were superb and if I were in the market for a Tactical rifle, this would have to be it.