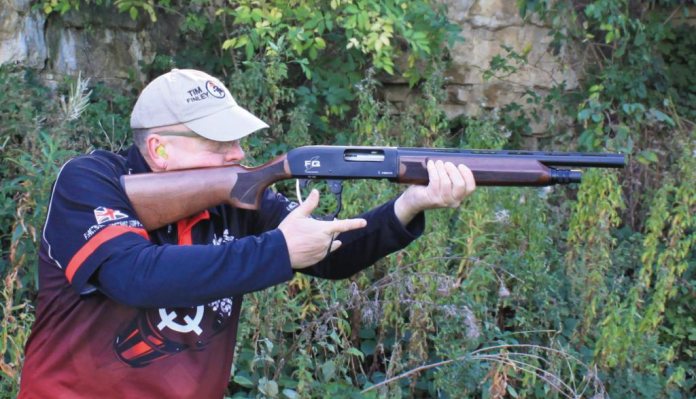 Shotguns come in all shapes and sizes. We are accustomed to semi-automatic and pump-action guns in the UK, as they are the norm. What is not the norm, is the under lever shotgun.

An organisation at the forefront of under lever shotguns in the UK is Practical Shooting Supplies (PSS). Their second foray into bringing this type of shotgun to our shores is from Barathrum, a manufacturer located in Konya, Turkey. They are a large outfit with a big factory, 10,000 m² to be exact! 95% of their products are exported and can be found in more than 14 countries worldwide.

PSS approached them and asked them to produce a shotgun for them. The gun was assigned the name the Bobcat and the model number FQ-UL12. UL indicates the under lever action and 12, the calibre (12-gauge). FQ stands for something else, Q meaning Quick. The FQ brand belongs to PSS and the logo can be seen emblazoned on both sides of the UL12’s action. Barathrum uses 4140 hardened steel for their barrels and 7075 aluminium for their receivers.

The Bobcat is based on Barathrum’s existing 12-gauge UL action, which they use on the LV-36 hunting shotgun in 36-gauge. It incorporates an underbarrel magazine and working the action ejects a fired cartridge and then, on closing, inserts a new one from the magazine into the empty chamber.

The standard Bobcat comes with a 24” barrel and a set of chokes (Full, Half and Cylinder), plus you can also buy a spare 26” barrel. It has a magazine capacity of two, making it a 2+1 or three-shot shotgun that can be bought using a shotgun certificate.

If you have a Firearms Certificate (FAC), then you have the option to buy either a 13 ½ or 18” barrel. The latter overhangs the magazine by 76mm/3”, while the former is so short that the magazine tube extends past the muzzle! The spare barrels cost £175, just make sure you have a slot on your certificate. Also, the capacity of the magazine tube can be increased from two to five rounds via an extension and, in fact, the extended tube is supplied at no extra cost if the gun is ordered initially in FAC configuration.

Being a shotgun, all the barrel lengths feature a brass bead front sight as standard. However, the Bobcat also comes with an 11mm dovetailed, 145mm long, optical sight rail machined into the top of the action. This means that you can fit a red dot sight or even a scope to use with solid slug. It really is a versatile gun with lots of potential uses.

The trigger weight of the FQ-UL12 came in at 2.3 kg on my electronic gauge and it was crisp as well as smooth in operation, however, it felt a lot lighter than that in use. The safety catch is located directly behind the trigger, simply push it in from the left to set on SAFE and from the right for FIRE, which is indicated by a red ring around the circumference of the button. When set on safe it locks off the trigger.

The FQ-UL12’s magazine follower is anodised bright red in colour to let the shooter know when the magazine is empty. The loading gate is ideal for fast reloads and allows the shotgun to be topped up even when cocked. Also, it doesn’t have a mega sharp ‘fork’ on the end of the gate, so is not a thumb trapper.

In use, I found that the lever was a bit stiff out of the box and that I needed a glove on my firing hand to act as a bit of padding on the back of my fingers. An alternative option would be to wrap the bottom of the lever in padded material, say leather.

Being a manually operated shotgun means you can shoot lighter loads than semi-automatic shotguns, which may be a factor in choosing an FQ-UL12. In addition to this, the UL mechanism means that the firing hand operates the reloading mechanism while the front hand stays on the gun when aiming and shooting, thus keeping the gun pointing exactly where you want it. With a pump-action, the aiming is compromised by the fact you have to rack the slide to reload the gun, potentially making a UL better for practical shotgun shooting than a pump.

The wooden furniture shows a deep, rich brown stain and for a better hold, there are twin panels on each side of the grip and forend with one showing chequering and the other stippling. Not only does this arrangement work really well, but it adds a bit of class and is a design touch that shows Barathrum really care about their products and how they look as well as function. The butt shows a rubber butt pad to help with the recoil and the gun comes with sling swivels fitted front and back.

At £599 for the standard 24” FQ-UL12, it’s not expensive at all, especially considering the quality. It’s a wellbuilt shotgun that’s solid and reliable.

I really enjoyed shooting it as it was a nice change from my pump-action and semi-automatic Section 1 (FAC rated) shotguns. As with all under levers, it needs a bit of polishing to slicken it up, but I found the action got smoother and faster in the time I had it. The more I shot it the better it got.

If you are looking for an alternative to the run of the mill pump-action shotguns then the UL has a lot to offer, and Western fans should like it too. The real cherry on the cake is the look and shootability of it with the 18” barrel. It just looks right and feels and handles as good as it looks. The 18” Bobcat is already a best seller and I can see why.

It’s worth mentioning that you cannot buy a pump-action or semiautomatic shotgun with less than a 24” barrel as a shotgun or as a Section 1 firearm in anything other than an under lever format.

Thanks to Richard at Practical Shooting Supplies for help with the production of this article.