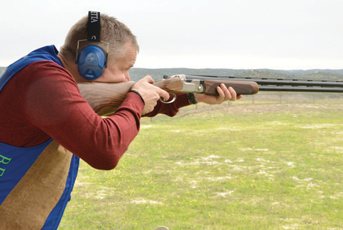 Arriving in Spain on a winter’s evening it was reassuring to see the Beretta event staff waiting to ferry us off to our hotel. As the bus travelled through the historic capital of Andalusia my fellow journalists from all over the globe were deep in discussion about the importance of this new gun from the world’s largest sporting gun manufacturer.

The 682 which it is replacing has had a long and successful career since its introduction in the mid eighties and although 50,000 have been produced in the last decade there is little doubt that the numbers being sold have been in decline recently, thanks to both its age and a clutch of technological advances from an increasingly savvy bunch of competitors. Perfect timing then to bring something new to the market, which should - if the Beretta boffins have got it right - turn into their next cash cow through the remainder of this decade and well into the next. The DT11 which was launched last year was undoubtedly an important step for the Brescia concern but it’s this gun that will sell in large numbers and deliver meaningful returns.

“The new legend in Clay Shooting” was how the presentation described the new 682 and although that may perhaps be a little premature, as such status is earned over many years, it does look as though the basic ingredients for such a bold statement are definitely there.

The gun has a close family resemblance in styling terms to the DT11 with a few hints of SV10, and looks very pleasing to the eye with polished action sides and swooping mirror finished detailing. The designation ‘692’ is picked out in graphite script while the only real adornment to the otherwise minimalist finish is the addition of the Beretta trident and wreath design in black gold on the bottom of the action. Those who demand game scene engraving may feel somewhat hard done by, but considering the guns purpose this clean simple look is fitting and modern, taking a big step forward from the arguably “busy” looks of its predecessor.  Although it may look like a union between several existing Beretta’s there are in fact very few parts carried over into the new gun; just the 682’s adjustable trigger group being reincarnated albeit with a different mounting system. Considering that it’s always been a reliable and crisp performer, it made little sense to throw away a proven design.

Another improvement that follows the DT11 also harks back to an earlier year. The receiver has been widened by 1.3mm which puts more metal between the hands and consequently improves the central balance, a feature that was found on early pre-1995 models of the 682.

The new gun also benefits from an extending of the capabilities of the B-FAST (Beretta Fast Adjustment System Technology) system that was seen on its bigger costlier brother.  With many consumers now considering balancer systems to be an essential part of the modern clay guns inventory it was time that Beretta responded to the march stolen from them in that area by the likes of Guerini, Zoli and Blaser. The answer they came up with is simplicity itself, a series of washers weighing 20 grams each can be added into the stock and these are located at the pad end of the woodwork to ensure that the extra ounces act as a pendulum to gain the maximum benefit, though their presence doesn’t preclude the shortening of the stock for those who need it. Another indicator as to how seriously this gun is taken by Beretta’s management is that every gun will leave the factory having been individually balanced, something usually reserved for guns from the Premium division.

In addition to the weight system the B-FAST system also incorporates an adjustable high trap rib (but that won’t be seen until later in 2013) and an optional adjustable comb that in terms of simplicity of use and reliability claims to be a step forward from what was on offer previously and is already available on its more expensive sibling.

The DT11’s trump card was its “Steelium Pro” barrels and the same technology has trickled down into the 692 which shares the same cold hammer forged super extended forcing cone format under the “Steelium Plus” name.  Although the length of the conic portion of the barrel falls short of the enormous 480mm found in the DT11 by 120mm, it is still nearly six times longer than the 65mm forcing cone found on the 682. It is claimed that this delivers improved patterns due to reduced deformation of the shot as it travels up the barrel and to improved pressure dynamics. This should translate to reduced felt recoil and perhaps more importantly less muzzle flip, all of which should mean straighter shooting with less effort.

A simple white bead sits atop the cross cut non-glare rib which tapers down from 10mm to 8mm though the Trap version will have a straight 10mm rib.  Constriction is provided by a full set of steel shot proofed Optimachoke HP extended tubes which are once again identified by different colour bands. These differ from the previous Optima system and have a different profile and thread to compliment the Steelium Plus barrel, so don’t expect your 682 or DT10 chokes to fit. Trap versions (30 or 32 inch barrels) will be equipped with fixed chokes with borings of ¾ and Full.

An interesting idea that will most probably prompt much club house discussion is the “soft touch” top lever which is fitted with a polymeric insert to make the opening of the gun more comfortable. Many may consider it to be nothing more than a gimmick but when one miss over 200 targets can mean the difference between winning and losing it seems prudent to help the shooter focus completely on the job of breaking the target and anything that assists in that goal must surely be a positive move.

Quality of wood on the test guns was good with drops on the sporter that I tested of 35mm and 55mm though the B-FAST comb version has drops of 38mm and 60mm. The Trap version is as you might expect rather higher in the comb at 29mm and 39mm while the adjustable version has a slightly flatter shooting starting comb height of 35mm/45mm. A microcore pad helps to keep things comfortable in the shoulder while the grips on both versions give a positive purchase with a medium radius that feels just right; chequering is well finished giving a firm grip with little effort. A schnabel or rounded forend is available on the Sporter while the Trap gun offers both the latter and a beavertail configuration though all types share the usual Beretta release catch arrangement.

Breaking Clays With The 692

Once the presentation was complete it was time to board the coaches and drive out to the Almenara Shooting Range where we had a chance to get up close and personal with the Sporting and Trap versions of the 692.  I headed off to the Compact Sporting course first to give the Sporter a whirl and it was almost immediately clear that although I have not in the past been a big fan of Berettas, this one seemed quite at home between my hands and it was soon dispatching a good variety of targets from skeet distances out to those considered to be a long way out even in FITASC terms.

Rapid changes of direction posed no problems and changing from slow to fast targets when tackling simultaneous pairs didn’t produce any drama’s either. Balance felt neutral which in turn imbued a feeling of confidence that it would go where you wanted it to with a minimum of effort, which would suggest that the extra weight in the receiver and those balancing “washers” were doing their job.

When people talk of negligible recoil they tend to be over exaggerating, as we all know that every action demands an equal and opposite reaction but the 692 did feel comfortable in the shoulder, and those Steelium Plus barrels do seem to assist when it comes to moderating muzzle flip which was a big help when pilot error forced a rapid follow up shot.  As for the long conic profile leading to better patterns there is no way to be totally sure without using a pattern plate and an ultra high speed camera but when put in the right place the gun broke every target it was presented with and broke it well using half choke even on the long range shots.

The Trap gun versions comb affords a view that perhaps sees a little more rib than I am accustomed to but there was no doubt that it shot to point of aim as it and its pilot performed surprisingly well over two rounds of Universal Trench. The fixed choke barrels gave good kills even on second barrel shots and it felt very comfortable, suggesting that those who shoot large numbers of shells on a regular basis have little to fear from the 692 when it comes to aches and pains after a long day at the range.

Beijing and London 2012 Olympic Skeet gold medallist Vincent Hancock (USA) was in attendance at the launch and I watched him destroy every target without looking as if he was expending an ounce of energy “...it’s a gun that feels easy to shoot, it doesn’t need to be driven hard, although you still need to put it in the right place the 692 allows you to do that without making hard work of the process and anything that can reduce fatigue can make the difference between winning and losing.

It seems that the new Beretta 692 will prove a worthy successor to the 682. In terms of looks, ability and performance it ticks all the boxes and offers the Beretta faithful an opportunity to answer those relative newcomers which have eaten into its market share in recent years.  It’s a gun that feels more than the sum of its parts and seems to inspire confidence in all who pick it up, however it has a long way to go before it reaches the legendary status it aspires to but it seems probable that it won’t be long before it starts winning its spurs and a place in the hearts of thousands of shooters around the globe.

Expect deliveries to begin late in the spring of 2013 with a price tag only marginally higher than the gun it replaces. Those who want to get their hands on one are advised not to wait too long as dealers I have spoken to are already indicating that many of their first orders have already been bought months before arrival on the shelf.