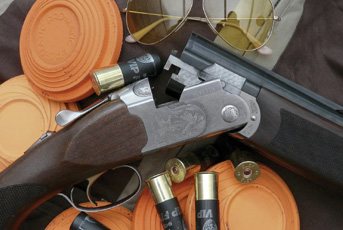 The new Silver Pigeon 1 Deluxe Sporting is another fine competition 12 bore from Beretta, and maintains the company’s recent philosophy of amalgamating each country’s list of wants and suggestions, filtering through them, working out which will work before encompassing them into the one design. The end result is a shotgun that should suit virtually every shooter, irrespective of where they come from, how they’re built and what type of clays they shoot.

Having already tested the game version of the new Silver Pigeon 1, I was more or less prepared for what awaited me when I opened the familiar blue travelling case. But where the game gun was of a slightly lower grade, the deluxe part of this Silver Pigeon 1’s description was instantly apparent. Rich, semi-oiled walnut with attractive graining made up the impressively sized, rounded comb stock and Schnabel forend, a thick, deep and soft recoil pad finishing off the stock’s profile.

Deep panels of chequering compliment the stock and forend whilst the typical sporting semi-pistol grip incorporates a palm-swell that allows the shooter to envelope the grip whilst keeping the hand securely in the exact place and position it needs to be. The next part of the upmarket package is the profuse rose and scrolls engraving around the broad, oversized trigger-guard, forend latch, top-lever and fences along with alighting ducks on the left of the action, pheasants to the right, the scroll work even extending to the forend irons and latch, the bright silvered effect contributing significantly to the gun’s name.

The only part of the action that isn’t decorated is the brushed satin effect top-tang that houses the manual safety and barrel selector. Teardrop shaped, the safety is broad and easily acquired allowing the shooter to disengage the mechanism and switch barrel order without having to take their eye off the targets.

Open the Pigeon and the familiar Beretta cut-outs come into view, the extensions that reside either side of the top chamber providing the detents for the locking lugs that extend from either side of the top barrel firing pin. Monobloc in design, the barrels are 30” only and come complete with a single white bead atop a 7 – 10mm tapering, cross–cut raised top rib. Unusually, what looks like a solid mid-rib, rare on a sporter since these too are usually vented, on removing the forend the barrels then become what is ostensibly free-floating only coming together again where they joint into the 3” chambers. Richly blacked and of Beretta’s usual high quality, muzzle restriction is as always regulated by a set of extended flush – fit Optima choke tubes. A tested and time proven design, they work well and allow the Pigeon to throw a well defined and evenly distributed pattern often allowing the shooter to open up their chokes to a wider restriction than normal, often an advantage overlooked by many clay shooters.

Whilst this Silver Pigeon has been designed with sporting clays in mind, the words ‘Sporting’ embossed along the left side of the top chamber, the size, weight and overall configuration tends to my mind hint at this Beretta’s more likely abilities as a potential all-rounder, a point tangibly proved when the gun was shot. Prior to this a few moments with the Arrow Laser Point highlighted that for me personally the Pigeon shot fractionally low, not a major problem on close range targets but a trait that had to be taken into account when distances increased. In other words just a fraction too much overall drop in the stock for my own liking but an ideal degree of cast. All I needed to do was mount the Pigeon no more than a ¼” lower than normal.

Size wise this new Silver Pigeon weighs in at a none too inconsiderable 8lbs 4oz with an overall length of 47 5/8” with a point of balance directly beneath the hinges. Drops at comb and heal are 1 3/8” and 2 3/8” respectively with a corresponding length of pull to the non-adjustable trigger of 14¾”. Pull wise the inertia operated trigger breaks on average at 5lbs 7oz, slightly on the heavy side but one that your Beretta dealer should be able to lighten should you so desire.

Shot around Bond & Bywater’s evening layout and loaded up with Eley’s 28gram VIP Trap plaswads filled with 7’s, my original theory was confirmed albeit with one reservation. There’s no doubt that this new Beretta is a big gun, the sheer physicality as soon as you mount it gives outright confirmation, the stock alone feeling large when again the cheek although the overall comfort and fit along with a palm swell that keeps the hand well anchored against the grip giving a feeling of reassurance.

One point I would change is the tulip on the Schnabel forend, the lip that extends around it at odds with the way I hold a gun, my extended left index finger occasionally coming into contact with this protuberance when shooting. I would have preferred a deeper more contoured ‘London-style’ forend design that to my own thoughts adds significantly to any over-under shotgun’s visual refinements.

Given the barrel length and size of the Silver Pigeon, along with a full compliment of Optima chokes, on going away birds the gun exhibits all the mannerisms of a low ribbed DTL gun whilst on sporting, especially gun down, the Pigeon transfers its abilities with ease. My main concern is that although the Pigeon is well balanced, it’s rather neutral when it comes to the swing. With the bulk of the gun massed centrally which means its behind the leading hand, you tend to have to drive it along, pushing it to where the muzzles need to be, the bodily attributes reducing what could be referred to as reserves of potential energy. The upside of this is that even with high – performance, the gun absorbs recoil which when combined with the thick, soft butt pad means little if any recoil is felt by the shooter.

Once you’ve become accustomed to how the Pigeon shoots and the fact that the choke tubes are correct to their designation, you suddenly start to get along with each other. As I commented, with the increase in the popularity of all-round hundred bird competitions that incorporate the main three types of clay shooting, for sporting and trap the Pigeon is equally at home, only the skeet birds taking it slightly out of its comfort zone.

Beretta’s new Silver Pigeon 1 Deluxe Sporting is a competition 12 bore that could well be classified as a long term partner. With obvious potential to be fine tuned to the individual shooter’s requirements irrespective of the fact the Pigeon doesn’t come with an adjustable stock, along with other areas that will allow the shooter and instructor to work closely together, this new Beretta could well become the 12 bore of choice for those looking for a shotgun for all seasons and reasons.

At £2,100 or thereabouts, whilst it isn’t an inconsiderable investment given today’s circumstances, for a Beretta of this quality and finish, it isn’t at all bad. Likewise, there’s also a genuine left-handed version which means left-hookers don’t have to go to the lengths of having the stock cranked the opposite way. A shotgun that was designed to meet the requirements of the vast majority of clay shooters, the fact it may need the most miniscule tweaks to achieve individual exactness is more or testament to the fact that Beretta have got this new range of shotguns more or less right, proof positive that listening to the needs and comments of shooters has paid off.