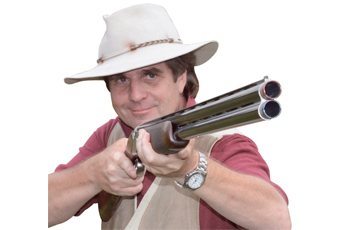 The Beretta 692 is the replacement for the popular and very successful 682E claybuster. The latter is a hard act to follow, the Gold E was, and is, a great gun enjoyed by thousands. But, I do not think that I am giving too much of our game away by noting that Beretta seems to have pulled it off with the new 692. I have tested several of them to date and all have impressed me. Indeed, I went to the launch of the new model in Seville where, as well as getting all the technical gen and shooting the gun extensively, I had the added pleasure of a long discussion about shooting technique with Olympic skeet gold medalist Vincent Hancock who was taught by his father using a method which sounded very close to my own Positive Shooting system (that may have been pure chance, but I will harbour the happy thought that he just might have seen a copy of the original book which sold especially well in the States).

Anyway, digression as usual. The 692 is not a 600 series (Silver Pigeon) though it may start with a 6 just to confuse us (though it shares the same trigger components). Nor is it an SV10 chassis (Prevail and Perennia) gun. It is a new creation with an intriguing and well conceived specification. The action, which is very well styled, has elements of both the 600 series and the newer SV10s. Our test gun, I might also mention, is a 32” specimen weighing in just under 8lbs – ideal for a serious sporter in my opinion. I really liked the streamlined looks, meantime, and the plain matt silver finish with polished edges and polished trunnion stud pin caps. There is no asymmetric shaping to the action’s rear as in the SV10s, the style is modern but not extreme. The barrel shoulders are asymmetric though, but it does not distract the eye and probably offers greater strength. I also like the way the action fences have been sculpted.

As far as the mechanical design is concerned, the 692 retains conical locking bolts, although the barrel shoulders mentioned above have been significantly increased in size and look rather like those on the Prevail/Perennia but are larger (and replaceable as they were on earlier Berettas). So, the barrels are not interchangeable with the SV10 chassis guns. On the hinging front, the system is the same Woodward inspired arrangement as in a Silver Pigeon, but the studs are wider in diameter creating increased bearing surface. The ejector mechanism is very like the SV10 but the trigger lock is fixed and the butt is not detachable.

The handling qualities of the gun seem especially good, there is more weight between the hands than in recent 682s. The action is 1.5mm wider than a recent Silver Pigeon but 1mm thinner than the new, hefty but very good, DT11. The adjustable trigger is inertia activated and the silver finished blade is especially well shaped tapering to its bottom. The top-lever, which some will like and others not, has a polymer thumb-piece. It is very comfortable in use, but I wonder how it will wear, Beretta say it will and have tested the material extensively.

The new specification does not end with the action, the barrels are really interesting too. They are made of a chrome-moly alloy Beretta call ‘Steelium’ and claim great things for. Where the gun gets really interesting is when you look at the barrel spec.  Monobloc and hard chrome lined as per the modern Beretta norm they show fleur de lys 3”/76mm steel friendly proof marks. The barrel weight was especially good too, 1450 grams. I also give a thumbs up to the tapered and ventilated 10-8mm sighting rib which has a white bead at the muzzle end.

Being a dedicated competition gun, the joining ribs – which only go back as far as the forestock – are vented.

Beretta have been doing a lot of work on their barrel development. The DT11, which shoots superbly, has a three section taper bore. The 692 is partially tapered too and has a fairly wide bore (18.6 in the sporter featured here, though the trap model is marked at a more standard 18.4). The barrels have been the subject of considerable evolution (though the concept of a taper bore is an ancient one). There is a tapered section in the first section of the tubes measuring 380mm. In simple terms, 100mm less conic section in the 692 than the flagship DT11 but probably producing many similar benefits. Both guns have a vastly extended forcing cone compared to their predecessors and are softer in recoil than the average.

The wood work was good as well. I liked the rounded forend, and the butt is amply proportioned with a subtle palm swell and full-ish comb. It was a comfortable stock well suited to a competition gun. The length of pull was the usual Beretta 14 3/4” with drop measurements of 1 3/8” at the front of the comb and 2 1/8” to the rear.  Ideal shelf measurements.  The wood showed some nice figure, and I liked the conventional panels and well cut laser chequering. The stock has a balance system within it, and an ultralight, and recoil efficient ‘microcore’ pad.

This gun shoots very well in both 30” and 32” form. I cannot make my mind which I prefer in truth they are both very good. I suspect I would ultimately be tempted by the greater pointability and stability of the longer gun - 32” tubes do seem an advantage on longer birds at difficult angles. Meantime, this new Beretta ticks all the boxes (and you will have a job finding one at a dealer as a result). The design is great. The specification is spot on. Build quality A1. The new features are useful, not gimmicks. The taper boring throws great patterns. Recoil and trigger pulls are good. There is an adjustable comb model too.

I will end by noting that the Beretta design team have come up with a trio of winners recently, the opti-bored Silver Pigeon 1 (one of the best buys on the market), this impressive new 692 Sporter clay buster, and the all singing and dancing DT11.

My thanks to Lyalvale Express for supplying the cartridges used in this test. GM