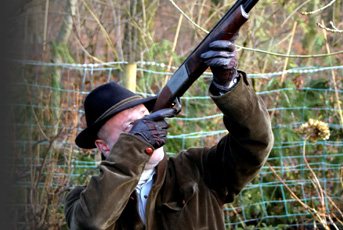 If ever a shotgun has been done down ever since its launch, its Browning’s Cynergy. Even Browning themselves don’t seem to have been able to settle on exactly what they should do with the model, as various tweaks, variations and even colour combinations have been employed to increase its appeal. But with the Lightweight Game version, they appear to have at last got it right and how.

What a Carry On

Arriving in the familiar, Browning-branded, fully lined and fitted Negrini carry case complete with a full set of Invector Plus multi –chokes and key, there’s sufficient room left over to stow your own personal paraphernalia. Once removed the first aspect that hits home is the Grade 4 woodwork! The well figured walnut stock and vented Schnabel-style forend are enhanced by the luxurious semi-oiled finish and standard chequering, with the deep gloss black of the barrels complimenting the quality of the furniture.

Though it’s not especially hard work to do it yourself, there’s something rather nice about a self-opening shotgun. The Cynergy’s boxlock action requiring nothing more than the top lever to be operated. Similarly, although a game gun, Browning have elected to leave the barrel selector/safety catch combo a fully manual affair, still a preferred arrangement from my own point of view.

The action is high strength aluminium alloy with a steel insert down the face. The monobloc barrels are locked into battery by the two pins that extend from the breech face, engaging and locking into the two détentes situated either side of the lower chamber. Decorated by lightly etched game scenes that take their inspiration from that of the B-Grade B25, my only criticism is that although nicely executed it would benefit from a more pronounced finish. Where the competition model makes its presence felt is in the trigger blade and guard. Electing to use the broader, smooth finished blade, ideal for the glove wearers amongst us, the guard looks slightly incongruous by virtue of the fact the familiar golden Buckmark is haloed by rose and scroll.

The usual trade off when it comes to lightweight shotguns is that they tend to kick a bit too much. With their easy carrying characteristics very much at odds with their inability to absorb heavy load recoil. Where Browning has capitalised is in maintaining this game version’s ability to reduce felt recoil whilst shedding just over ¾ lb over the standard model. This lightweight tipping the scales at an exact 7lbs!

Aided in no small way by utilising their proven, back-bored technology, the increased internal bore gives the pellets more room to breathe as they head off down the tubes. Combine this with eased forcing cones ahead of the 3” chambers, stock head angles and dimensions coming together to produce a comfortable shooter, even when loaded up with 28g and 32g Express Supreme comp and game loads.

Similarly the quality of pattern generated from the long, flush-fit, Invector Plus multi- chokes. Meaning slightly wider than usual restrictions can be selected on all but the most distant targets, ½ plus a charge of #8’s annihilating 40-yard + clays. Flat shooting compared too similar 12-bores; the Cynergy Game offers a goodly 14¾” length of pull combined with a drop at comb and heel of 17/16” and 2¼” giving the stock good, sensible dimensions and angles.

The 6lb pull of the broad, smooth trigger blade though in this case non-adjustable, is exactly as a game gun should be, not overly heavy yet requiring sufficient pressure to go some way towards eliminating accidental discharge. That said there’s a fraction of drag before take up, something I didn’t expect.

Interestingly, by reducing the familiar pistol grip palm swell, Browning has given the Lightweight Game the ability to move within the shooter’s hands, adding to the overall flow when seeking fast, unseen targets. The view along the 5mm vented game rib is as classic as you’re going to get on a modern shotgun. With the white bead crowning the 28” barrels just bright enough to show in peripheral vision yet sufficiently understated to still be classed as suitable for game. The balance point is an exact ¼” in front of the hinges whilst gentle pressure to the typically neat top lever instantly activates the self-opening system and well timed ejectors.

To shoot, the Lightweight Game has capitalised on the Cynergy’s competition heritage. The gun mounts easily, the solid insert in the heel of the rubber pad eradicating recoil. The gun’s overall poise and demeanour promotes fast target acquisition coupled with the ability to dismount even between birds. The muzzles flash onto their target, with minimum physical drive required from the shooter. The reaction of the gun during discharge is that of crispness, this Cynergy reacting as quickly as the user can make their decision. Fast, flat and accurate; is a good way of summing up what the Game offers.

If further proof of this Cynergy’s abilities were needed, even as a competition gun, then look no further. An unexpected invitation to shoot in one of the recent competitions saw me lift the winner’s trophy on only the second time I’d used the gun. The overall feeling of the Browning occurs only occasionally, the impression in the hands, the balance and whole sensation is of a 12-bore with purpose to a degree it seems to positively inspire the user to try harder, rewarding them for their efforts.

Yes, we all know that the Cynergy sits somewhat uneasily within the Browning collection, the model’s acceptance by both confirmed and potential owners still undetermined. Where the Lightweight Game wins out is that it’s sufficiently different, attractive, versatile, nicely made and decently priced at £1,900. If I personally was looking for a good all-rounder that’s dissimilar from the norm I couldn’t think of a better shotgun to go for. This is a genuinely nice gun to use.

Browning has at last got it right
Looks good, shoots even better
A fantastic all-rounder