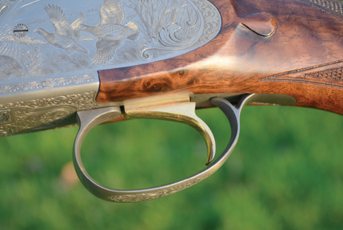 Browning over and under guns are amongst the best known in the world with good reason. They are much copied, and have been bringing down birds and winning competitions for over eighty years (rather longer if you include the semi-automatic A5s). Many readers will know, meanwhile, that the ‘Superposed’ was the last great creation of Morman gun-making genius John Moses Browning. He literally died at his work bench perfecting it (leaving his son Val to perfect the first single trigger mechanism).

In the 1970s, Browning became involved with BC Miroku in Japan who had been making blatant copies of their guns for years. They we so good, that Browning ended up contracting Miroku to make much of their shotgun range (though they continued to manufacture guns under their own name in Belgium too). It has been a happy relationship which has lasted some forty years. For the record, the Japanese Brownings were called ‘Citoris’ (more commonly in the US than here, where the name is less familiar than the numeric designation). They were immensely successful.

We have seen the 325, the 425, the 525, a 625 in the States, and an exciting new model called the 725 with which I have had some success game shooting myself (but which uses a new design of action influenced by, but not copying, the classic Superposed B25 – it also sports some clever new ‘DS’ chokes incorporating a gas seal).

Back to our test gun, a new model Heritage II. It’s smart looking and side-plated with a lot of engraving. This Heritage II has a more rounded action body than its predecessor and comes now with Invector Plus stainless chokes usually (5 supplied). The Hunter as tested has a 6mm rib and semi-pistol grip, the Sporter version, a 10mm rib and full pistol.

Our Hunter II, an early specimen taken from the shelf at the West London Gun Room, actually has Invector barrels (as you may note from the open action picture), but the ones you will get in the shops today will all be Invector Plus. I do prefer these back-bored barrels. I believe they reduce perceived recoil and improve patterns with heavier loads. This gun is fleur de lys proofed for 3”/76mm cartridges and is steel shot friendly. It weighs in at about 7 1/2lbs with 30” barrels – about right.

The new action looks distinctly better (and really nice in the scaled down 20 bore version should you happen upon one). When I first tested the Heritage, I liked it but thought it a little angular in the action body styling, it is significantly improved now (although in 12 bore form it remains relatively deep because of the Browning full width hinge pin design which also involves lumps and bites beneath the bottom chamber mouth). The gun is clearly very strong and extremely well finished, as well as being visually attractive. You cannot fault the quality on close inspection. It comes up to face and shoulder well too.

The stock has a classic form. On mounting, one is struck by solid handling qualities. It is no light-weight but nor is it ponderous in the hands. The grip is especially good and suited me well. If you want a traditional - and excellent - Browning full pistol you can find an equally good one on the Sporter model with the wider rib as noted, but I prefer the semi-pistol for field use. The stock was well crafted and it is twinned with a tulip forend. The LOP is 14 3/4”” (including the usual black plastic butt plate) with drop of 1 ½ and 2 1/4” and slight right-hand cast as is typical of the marque. The quality of the wood was well above the average with very good figure including some ‘fiddle-back’ marking of which I am fond aesthetically speaking. I liked the oil finish, the silver oval, and the well cut chequering.

As for other stuff, the trigger blade is gold-plated, the trigger mechanism is inertia activated and the barrel selector is combined with the safety in the normal Browning manner on the top strap. Internally there is almost exact mechanical similarity with the 525, but the Heritage does have a slightly wider action to accommodate the sideplates if you get your calipers out. The quality of gunmaking is excellent throughout, with exemplary metal to metal and wood to metal fit. Blacking is A1 too. Monobloc joins are barely visible. Although Browning/Miroku have not always used this system of construction (it came in half way through the 425 production cycle) they now do it brilliantly well.

Overall, this is a well-made, deluxe gun, built to last. The decoration is not over the top and will have many admirers.

The test gun has a bit of heft to it. The balance with the 30” tubes is slightly muzzle heavy and it feels steady and quite pointable. Does it feel better than the latest 525s? Not really, they are so good in the 30” Sporter form with lightened barrels that they are almost impossible to beat at the price, but it feels as good, has a better grip for game shooting and looks pretty ritzy.

It’s shooting performance is good too. Reasonable recoil and trigger pulls, everything doing exactly what it says on the tin and looking smart at the same time. I have no doubt that this is a gun that would take a lot of punishment as well. The action is a little heavier with the sideplates as well as little wider than the standard 525. This puts more weight between the hands too which can only be a positive. How does it compare to the Beretta EELL its obvious competitor? Well, it is a different gun with a different character. The basic design is proven and ‘bullet proof’. I really liked the engraving (full tight scroll would look great too). The wood is excellent as well as the quality of finish and basic form and design. It all comes in a very smart plush lined case too.