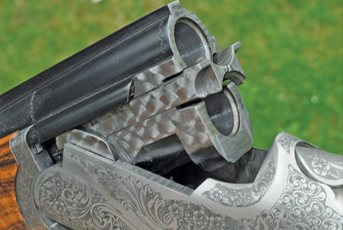 This month we have something a little unusual, a French Chapuis Super Orion 28 bore over and under brought in by York Guns. One can get bored testing very similar guns again and again, especially products where any change is primarily cosmetic. The problem is, of course, that guns are very durable, and manufactures are loath to tool up to make completely new ones because of the design and tooling costs involved. Compared to car manufacturers, sporting firearms makers can keep the same gun in production for 50 years or more with little more than a finish and accessory package (which often suits a conservative shooting population as we’re a traditional lot).

There must be six companies in Italy, meantime, making essentially very similar over and unders and ditto in Spain where a dwindling number of firms, the Basque gunmaking region looks so like Birmingham in the 1960 and 70s now, make what looks like almost the same gun – a variant of the Holland & Holland sidelock, the parts of which are sourced from an even smaller number of suppliers [just for the record, there are a handful of boxlocks still being made in Spain, both conventional Anson and Deeley’s and simplified trigger plate guns but I suspect their days are numbered].

Such is the modern guntrade, sadly, which, like the curates’s egg is good in parts, but increasingly challenged. There are happy exceptions: the continued creativity of Beretta and Browning with new models like the 692 and 725, and the innovation from the British firm of Boxall & Edmiston with whom I am very pleased to have an association. Anyway, as ever, I veer off the point, so coming back to it (more or less at least), there is one country which continues to do things a bit differently, which has a huge hunting population, great design flair and manufacturing expertise, but of which, in the UK, we hear little about comparatively speaking – and that country is France.

They have a number of makers offering very different products including, most notably, Verney Carron and Chapuis. The test gun is out of the last mentioned ‘atelier’ as evident. It is still very much a family concern. Because I am still in the mood for digression, let me just note a little of ‘la difference’ on the other side of the channel: the sliding-breech Darne, the ultra-light ‘Baby Bretton’ or the many past products of Manufrance – often very unlike the those of Gardonne, Eibar and Birmingham. French guns were typically designed for a different type of ‘hunting’ to ours. They do have driven shooting now but most Gallic shooting sport was walked up and continues to be. The guns are often light.

The 28-bore on test, made by Chapuis of St Etienne, definitely falls into that category, but it is in no way eccentric, though. Weighing only 6 pounds, even with 30” barrels, it points well and feels good as it comes up. The action bar is pleasantly rounded, making for a svelte look in the much admired 28 gauge (one of my favourite bores and vastly better than a .410, capable of almost all a 20 bore will do). It has bifurcated lumps and trunnion hinging (and thus a low profile), bolting is Beretta like, and there is a mechanical single trigger mechanism. It is side-plated with lasered scroll and game engraving which, is adequate but not inspiring. Otherwise the standard of presentation is impressive. The shape of the gun is elegant as noted. Wood to metal fit is impressive. The machining is as good as anything routinely coming out of Brescia. The fitting of the plates to the sides of the main action body is impeccable, as is the fitting of the trigger plate underneath.

This is also no doubt the product of new machining technology adopted as much by Chapuis as many other manufacturers world-wide. The engraving though a little thin, gives fairly full coverage with scroll and gamebirds. I was indifferent to the pheasants but the woodcock on the bottom of the action were good. The French love les becasses even more than the rest of us (though that said, woodcock seem to grace a lot of action bellies).

Generally, the form of the gun is svelte. I especially liked the well figured capped and quite tightly radiused slightly palm swelled pistol grip stock and rounded forend – both well done. The length of pull was 14 ¾” with a wooden butt plate. The drop is a little low at 1 3/8” and 2 3/8” (but bespoke measurements are a no cost option). The standard of finish to the wood was good with competent chequering laid out in panels and a traditional oil finish that was much to my taste.

The barrels are fixed choke, mono-block and have partial solid joining ribs extending to the forend (a common weight saving measure). They are 70mm chambered (there is no commonly available 76mm/3” 28 bore cartridge). The sighting rib is of my favourite pattern on a game gun – a solid tapered design. I like them because they are less easily dented in the field as I have often noted (why they are not more common beats me too, when they make so much sense).

This gun was lively – as one might expect considering its weight – but not a wand, thanks to the long barrels and hand-filling fore-end and grip. It pointed well. Breaks with the fixed quarter and half choke barrels were excellent using Lyalvale Express 24g loads. Felt recoil was surprisingly modest considering the lack of weight. I liked the function of the gun and it felt good too. This one shot noticeably better than a 5 1/2lb side by side I have shot from the same maker.

Over and unders do make more sense in lightweights (that said I do not practice what I preach with my 5lbs. 3 oz. Fausti). I thought this a good little gun, nevertheless, it reminded me of what French gunmaking can still do and it had definite potential for further development (primarily on the engraving front which is easily done in the day of the laser). Bottom line? An interesting gun which is genuinely different. With an RRP of £4,395, which, potentially, might include a bespoke stock, it offers value for money. The Chapuis range starts at £2,495 for a 12 bore. The company also offer pairs. GM