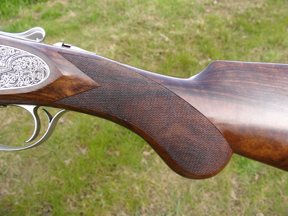 This test concerns a gun that I have been using for the last six months or more - and notably through the last game season - a Guerini Maxum.  Guerini guns have been brought into the UK for the last couple of years by Guerini UK. This company was set up by businessman Mike Mansfield and Trap ace, Kevin Gill.

Kevin, essentially, came to Mike, noting that he had been impressed by the Guerini guns, and the two of them set up a partnership to import and distribute them. It has done extremely well in a very competitive market. I know of one retail gun shop fairly near me that has sold a hundred of
them. That’s quite something these days.

What’s the test gun like? Well, first let me declare a bias, I had a hand in the stock design - supplying Guerini UK with what I considered an ideal set of measurements early on in this project. With that stated, let me note that I think the new guns look and feel really good. The test model, a Maxum with both 20 and 28 bore 32” barrels, is one of the prettiest guns I have ever encountered at this sort of price point (something just under £2,500 for a single gun, and something just under £3,000 for a twin barrel set).

The Maxum demonstrates what can be achieved with CNC and a bit of imagination and Italian design flair. The mechanical design is not radical - but very good; the detailing and finish is outstanding. The Maxum not only has elegant lines, its wood is unusually well figured and the side-plated action is beautifully engraved, probably by some clever mechanical process - but you would be hard pressed to tell. I might note in passing that there is also an equally attractive colour case hardened model available with Purdey style rose and scroll.

Both sets of barrels are manufactured, of course, on the well proven monobloc system. I have noted many times before that this method of manufacture has now been adopted by all the major manufacturers.  Monobloc barrels are cheaper to make than chopper lump types, but there is no evidence that they are any weaker when well put together. The chambers are nicely machined and designed for 2 3/4” (70mm) cartridges in the case of the 28 bore tubes and 3” (76mm) shells in the case of the 20. There is, of course, no 3” 28 bore generally available (yet).

The bore diameters on the 28 bore are 14.1mm (top) and 14mm (bottom). The 20 bore barrels are both marked at 15.8mm by the Italian Proof Authorities - a little tighter than my preference but typical of modern 20 bore guns made on the Continent. The 28 and 20 barrels both have full length ventilated joining ribs and a ventilated, flat, 10mm sighting rib with a white bead at the muzzle end. This presents a good picture to the eye. The top surface is true and well finished too. There is a subtle centre channel, and several people have commented to me how much they like the rib design (30” game guns are available with a 6mm rib of equally good pattern).

Internal and external finish of the barrels was good. Blacking was very nice - really lustrous. The ejector work was well assembled too with engine turning on the flats of the monobloc - always a nice touch. My only slight criticism of the 20 bore tubes - excellent in all other departments - was a very slight cosmetic gap between the monobloc and barrel tube in the top barrel. Generally, though, both sets of barrels were well constructed. They are both equipped with concealed multi-chokes.

I had specified 32” tubes - they seem to suit me and my style of shooting. I would usually advise 30” as the right length for most people, however. The 32” guns are for those who know they want them, they make a gun more pointable, but they may be more difficult to swing for the inexperienced user. Indeed, I would go as far as to say that many people are over-gunned with a 32” – especially if the barrels are on the heavy side (not the case here).

The Maxum’s action is of very familiar design - the Northern Italian, over and under equivalent of the once ubiquitous Anson and Deeley. Semi-circular recesses on the monobloc mate with stud pins near the action knuckle (as in a Beretta or Perazzi) for hinging. There is a long slot bite beneath the bottom chamber mouth, which is engaged by a full width bolt that emerges from the bottom of the action face – not unlike a Rizzini. This results in a slightly deeper action than one that employs a Woodward or Boss style bolting system. But, in the case of 20 and 28 bore this has positive advantage as it allows for a gun to be designed with an almost ideal grip depth.

The Maxum uses coil springs to power its hammers. There is a sliding auto safety on the top strap with a Beretta style barrel selector. The single trigger mechanism - which proved perfectly reliable with both 20 and 28 bore barrels in use - is recoil activated. Machining and finish are outstanding.

If I was to try really hard to find something that I did not like, I might mention that the Maxum could have done with a little more purchase on its good-sized safety. I might steepen the ramp a whisker and coarsen the chequering. This is very small stuff though. The action sets a standard aesthetically and in its general quality of machining and presentation.

The stock of the test Maxum is made from really well-figured wood as noted. Taking the price into consideration – and I never forget the bottom line when testing for GunMart – it is exceptional. You could pay £1,000 for a blank of this quality. Stock shapes are extremely good too. The comb and semi-pistol grip would be hard to better. The comb has a nice taper and the grip is ideally radiused. The Schnabel forend looks good too, though my preference is always for a forend without a pronounced front lip. With regard to measurements, I can hardly criticise these as I supplied them. Length of pull is 14 ¾” with a wooden butt plate. Drop is 1 1/8” at the nose of the comb and 2 1/8” at heel. The stock is well chequered (the diamonds are exceptionally well cut - probably by laser).  All the wood is well finished.

Here, I could wax extremely lyrical. This gun shoots superbly in 20 bore form and very well in 28 bore guise (though, now I have had the chance to try the 28 bore 32” tubes, I think that I would opt for 30” in this bore size). The Maxum helped towards my best game season ever. It is a little muzzle heavy with the 32” tubes, but - a but that has led me to rethink my views on balance - the 20 bore 32” really did the business for me. It was one of those guns that you begin to believe you could not miss with. I do not think that I have ever felt as confident with a gun in the field - 20 or 12 bore. It just shot so naturally - look at the bird and let the gun do the rest.

Trigger pulls were good for a coil spring gun. Recoil control was first class. I have also shot the 30” 20 bore gun extensively and that is another outstanding piece of kit as well. It has a faster handling characteristic. My final comment is simply that I highly recommend these guns. They are well designed, well engineered and they shoot better than many much more expensive shotguns. If you are looking for a new game gun, look no further. I use my Maxum with its 32” tubes for all sorts of stuff now - game, pigeons, clays etc. It has not replaced my old faithful Beretta 303, but it never fails to put a smile on my face. Marks out of 10? 9.5.