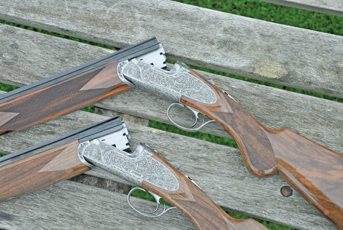 This month’s test concerns the latest version of the Guerini Maxum. I shoot with a pair of Maxum 20 bore 32” sporters, and these new guns, superficially, look very similar, but some very interesting and useful changes have been made to what are already excellent guns. I have to hold my hand up and declare that I helped Guerini UK with the original spec for their guns when they first entered the British market some five years back, my input concerned stock dimensions primarily – the Italians never seemed especially good at understanding our needs for driven game shooting and sporting. Their own shooting is mainly walked up on the live quarry front and trap as far as clays is concerned (though as with many places, sporting has a growing band of followers).

As for the test guns, and they happen to be a consecutive numbered ‘pair’. A true pair, for the record, usually has consecutive numbers and is exactly matched for balance and very close for weight and wood figure (for which one usually pays a small supplement).  Pairs may also be ‘composed’ – non matching numbers on similar guns – or true pairs with one made at a later date to match the first with a different number. Anyway, the test guns impress from the start. The Maxum is a pretty gun with bold scroll engraving on a silver finished action. It looks as if it might cost much more than its RRP of £3,060. The excellent aesthetics have not changed.

The mechanical specification, meanwhile, includes trunnion hinged, bifurcated lump barrels, a low profile and elegant single trigger action, a semi-pistol grip butt of especially elegant form, a rounded Boss style fore-end with push rod fastener, and, most importantly, new barrels with a 10-8mm taper pattern rib of solid pattern combined with solid joining ribs. [My own 20 bore Maxums by contrast are designated ‘sporters’ with a vented, parallel rib with subtle centre-channel and schnabel forends.] The barrel weight on the new gun has been significantly reduced (from 1485 grams to 1435). The guns look very similar to the previous model but do feel slightly different. A little more lively and pointable. They hit the scales just under 7lbs.

Bringing the gun to the shoulder, you’re still struck by a slightly muzzle-heavy balance on the 32” tubes but it is less noticeable than on the previous version even though the barrels are only 50 grams lighter. The gun feels surprisingly lively and pointable.

The well-constructed and lustrously blacked barrels seem relatively light for length and the new rib really is first class, presenting a near ideal picture to the eye. The grip and forend provide good purchase too. I like the size and proportions of the grip and it’s radius. It’s not too acutely angled and quite even in depth, as I prefer. A lot of recoil is taken through the hands. A well designed grip and forend ensures the hands stay put.

Overall, the Maxum looks great, it well finished, and feels solid but not stolid in spite of the long tom tubes and relatively heavy weight for a 20. It’s quality of finish and wood to metal fit are excellent. The barrels are constructed on the monobloc system and Guerini have got much better with the joins in this department. They are and camouflaged with the usual line of engraving. The well machined chambers are designed for 3” (76mm) cartridges. The test gun bears Italian fleur de lys steel shot proof marks (though steel should only be used with a maximum of half chokes).

The barrels on the Maxum have solid joining ribs and the new, excellent, tapered sighting rib as noted. As the barrels are relatively light, I suspect that you will find that the rib hollowed internally as most ‘solid’ types are. The rib not only presents an excellent picture to the eye, but is tougher than a vented one, not being as prone to denting – a real boon for a working gun. It has a well finished top surface and is perfectly true. It’s relatively light weight also helps to keep the barrels feeling lively. There is a plain metal bead at the muzzles. It is not too large and compliments the proportions of the rib very well.

The Maxum’s action presents no surprises. It has the usual split pin arrangement (with studs mounted in the inner action walls for the barrels to hinge up). Helical springs are used to power the hammers. The single trigger mechanism is of conventional bob-weight intertia type, and a good sized selector is placed on top of the conventional thumb operated top strap safety. The quality of the trigger pulls was good.

The locking on the Maxum, like other guns in the Guerini range, involves a full width bolt coming out of the bottom of the action face and engaging bites beneath the bottom chamber mouth. It is a well proven system (inspired by Browning and seen in many other guns). The only disadvantage is that by placing the bolt and bites beneath the bottom chamber mouth the gun is made a little deeper in profile than might otherwise be the case with a Boss bolted design. This is no problem at all in a 20 bore – indeed this gun still has a notably shallow profile and top and bottom straps are ideally spaced for a good grip design with even depth.

It is also nicely oil finished and well chequered. The length of pull is a whisker under14 3/4” from the middle of the trigger to the middle of the wooden butt plate. Measurements to heel and toe are plus 1/8” and plus 3/8”. The comb has a nice taper. I have already noted my somewhat biased positive opinion of grip and forend on this Lincoln is quite thick and comfortable. It suits the gun, though the aesthetics at the nose of the comb might have been improved slightly. Drop measurements were good, a 1 3/8” at the front of the comb and just over 2 1/8” to the rear.

Having had a hand in the spec of these guns when they first arrived, and using a pair of them for several seasons, I could not wait to get out with the new Maxums. Sadly, I could not get out with them on driven birds, but I spent a very enjoyable afternoon shooting clays with them. I really like my existing pair of Maxums, but I have never shot them quite as well on clays as game. The test guns were marvellous clay busters though. They were super to use in fact, pointable, soft recoiling (with 24 gram Lyalvale Express Super Twenty plastic wad cartridges) and also that magic quality – fun to shoot.

They are so good in fact that I will soon be shooting a pair myself. You can’t say more than that. The change of rib and forend and the slight reduction in barrel weight has made this the best pair of Guerinis that I have yet shot. My rating? 9 out of 10, possibly better when you factor in the reasonable selling price of just over 3K.

My thanks to Mike Mansfield and Kevin Gill of Anglo Italian Arms and to Lyalvale Express for supplying the cartridges used in this test.