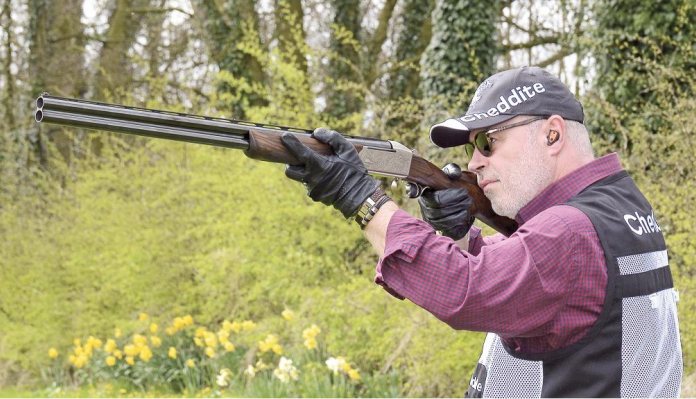 For many, ownership of a Krieghoff is a life’s ambition, whilst for others it’s the shotgun that’s helped them to realise their competitive dreams and ambitions. Over here, the K80’s reputation in the world of DTL and Sporting has guaranteed this iconic shotgun a permanent place in shotgunning history, whilst at the same time turning many an unknown shooter into an international sportsman. Similarly, for those considered good enough, Krieghoff sponsorship is affirmation that you’ve achieved a level worthy of carrying the famous German name.

If there’s a couple of physical aspects of a K80 most shooters are aware of it’s that they tend to be a tad on the heavy side and the distinct competitive looks rather preclude a K80’s use away from the layouts. That is until the introduction of the Parcours, a K80 that is as near to an all-rounder as any K80 has ever been. Equally, whilst the big bruiser competition guns make no concession as to their purpose, barrels hangers, elevated ribs, and distinct extended chokes, the very nature of the discipline of Parcours means this K80 exhibits a line of build and a visual delicacy that means it’s the perfect partner whatever and wherever you’re shooting.

To look at, the K80 Parcours enjoys the exact same profile as its more heavyweight siblings, but with a difference. Like all K80s, the semi-oiled finish walnut is of exceptional quality, as is the fit, finish and the execution of the chequering. A neat rubber recoil pad completes the butt, a far smaller palm swell still allows the shooter’s hand to find the exact same place on the gently radiused grip each and every time, whilst the hand-filling forend, kept in place by a small stylised latch, has taken on more diminutive lines. Likewise, with no overt contours or finger grooves, the forend now promotes far more fluid and therefore more active movement of the gun.

For those more used to the more familiar K80, the first point of note is that the 30-inch gloss black barrels are joined together with a solid mid-rib, whilst the game width top-rib sits on far lower, less obtrusive stanchions, only a white lozenge bead hinting at this 12-bore’s competitive inclinations. Monobloc in construction and swaging into the familiar three-inch chambers, although the Parcours can be had as a multi-choke, those who buy them take a more unusual approach. Supplied Full and ¾ fixed choke, many of them, such as the example on test, have their factory settings eased to 5/8 and 5/8 or ½ and ½ dependant on the shooter’s personal preferences or the gun’s intended use.

Whether you’re an existing K80 shooter or a casual onlooker, the style of the Parcours mechanical action is unmistakable. Retaining the overall profile of the Remington and K32s on which this action is based, the angular lines, slab sides and sliding top latch are still there. In fact, if they weren’t, this 12-bore just wouldn’t be a K80 or have the inherent appeal or desirability of these world-renowned shotguns.

The crisp, superbly executed engraving that envelopes the entire external surfaces is a combination of scroll, with more than a hint of ancient Greece thrown in for good measure. A broad trigger guard keeps the adjustable blade out of harm’s way, whilst the barrel order selector flag sits just ahead of the trigger, a quick flick left or right determining top or bottom discharge. That said, if you elect for identical choking, bottom first will be the standard selection.

As with all K80s, the short top-lever extends from beneath the sliding latch, whilst the long and lockable, manual de-cocker safety means the shooter is fully aware as to the gun’s status.

The instant you heft the K80 Parcours you’re immediately aware that you’re holding something that little bit special. Weighing in at 8lbs 10oz, which means for a Krieghoff K80 it’s a little lighter than usual and with an overall length of 47½-inch, the Parcours still feels exactly as a K80 should but with a more lithe and limber sensation. Equally, the 14½-inch factory set length of pull to the whisper smooth 6lbs breaking strain trigger means that the Parcours virtually eliminates any conscious operating effort. And for those who need to make minor adjustments, whilst the trigger’s braking weight remains the same, the blade can be altered approximately a ¼-inch forwards or backwards, so as to ensure perfect physical placement.

Opening the Parcours is once again effortless, whilst the fully synchronised ejectors throw the empties in perfect harmony. And whilst some may consider this K80’s physical weight a little heavy for an all-rounder, like all Krieghoff shotguns, when the gun is mounted and in motion, the bulk just fades away. Balancing directly beneath the hinges, the only unusual aspect was that the gun on test shot from my perspective a little high.

But after six or so 28g Cheddite Mach 3 loads had made their way out of the barrels and I’d made a minor adjustment to how I mounted the gun, the orange clays of Malmo’s sporting layout were in the clouds, literally, a vague trace of them left lingering in the sky. The sheer ease by which this Krieghoff mounts, swings, changes direction and gets onto its targets personified as to why these shotguns have developed the reputation they so richly deserve. Twenty-five Mach 3 and an equally number of atomised clays later, the Parcours still showed not the slightest hint of faltering; my only consideration being that if this K80 was mine I’d have the comb lowered and the chokes opened up to ½ in both, but that would be my own personal preferences. But to say using a K80 Parcours is like shooting with velvet would be an understatement, this Krieghoff is effortless to use.

Krieghoff K80s don’t come cheap, and the Parcours is certainly no exception. Even before you take into account any personal fine-tuning you’ll part with around £11,995 for the pleasure of initial ownership. The rest will be by arrangement with importer Alan Rhone or your chosen gunsmith, most Krieghoff dealers such as Malmo able to provide a variety of after-market services.

A considerable investment, is the K80 Parcours worth the asking price? Yes, it is and I’ll now outline the reasons. As a 12-bore with which to shoot standard sporting clays, FITASC, Parcours and some skeet, this shotgun is the perfect tool. But unlike the more conventional K80s, that tend to stand out like a sore thumb when away from the layouts, you can add into the Parcours mix pheasant, partridge, grouse and a few ducks, since this K80 is as much at home on game as it is on clays.

It’s well-known in the book of shotgun shooting facts that, if you want to get as good as you can possibly be, use the same shotgun for everything. Well, here you are, the Krieghoff K80 Parcours that, unlike a variety of other purported shoot anything shotguns, is a game gun, a clay breaker, a design that has more than stood the test of time along with an enviable competition heritage all wrapped up in one. In other slightly harsher words, if you find you’re failing to connect with one particular type of target, or one type of driven or walkedup bird, have a few lessons. Reason being it certainly won’t be the K80 Parcours that’s at fault!

With thanks to Malmo Guns for the provision of the K80 Parcours, where this gun is currently for sale at the time of writing, the 28g Cheddite Mach 3 cartridges and their clay layout.