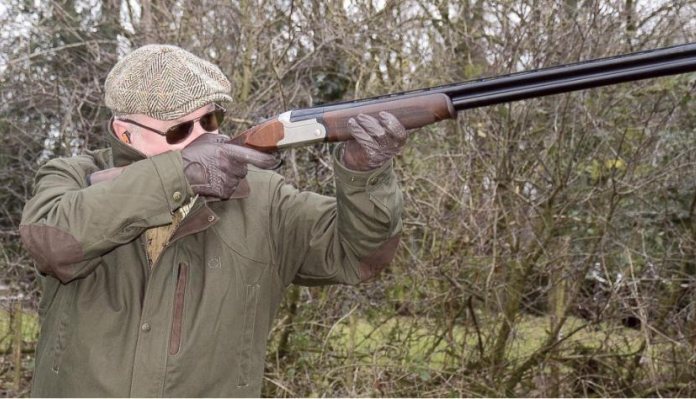 If ever an Italian gunmaker has had a turbulent time here in dear old Blighty, it’s Marocchi. After the original importers JLS ceased to be, due to the passing of the founder, Marocchi has disappeared, reappeared with a different importer who made a mess of it, before disappearing again. Now, with luck, Marocchi’s fortunes here in the UK have changed for the better, Viking Arms now the importer. The main benefit being Brit shooters now have reliable access to some of the best Italian shotguns available, Marocchi producing a whole cross section of game and clay breakers at a variety of sensible prices.

Best known for their clay breakers, the First-E seen here is a lightweight 12-bore, an over-under lightweight that to a degree makes many a 20g feel obese. The other feature is that it embodies some of the distinct looks that have always set Marocchi apart from the rest, small touches that indicate an attention to some of the smaller, often overlooked details.

Fitted with the optional 30- inch monobloc gloss black barrels (although a 28-inch are also available) both lengths accompanied by a set of flushfit choke tubes, a small brass bead finishes off the 7mm vented top rib, the fact the First-E is a game gun means that the mid rib is solid- just as it should be. Leading into threeinch chambers and well-timed ejectors, the barrels fit neatly into a mechanical alloy boxlock action, a narrow plate in the action face allowing quick and easy access to the firing pins, a lower locking lug extending into a substantial bite below the lower chamber.

It’s the exterior of the brushed finished action that’s markedly Marocchi. With a simple brace of pheasants on the left side, a matching pair of partridge on the right, a quilted effect runs along the top edge of the action, culminating partway along the fences, the effect also running along the base of the action and along the bottom tang as far as the black trigger guard and blade. On the upper side, the top tang has been left plain; just the extended black top lever and manual safety left to provide the ornamentation.

Like most Marocchi, the furniture has a semi-oiled finish, beneficial to a game gun given the fact that it’ll have to endure a whole variety of weather. The forend is of the Schnabel design with conventional chequering, although a small flourish near the tip adds that little extra. Similarly, the grip, two oversized panels on each side replacing the more familiar single sections, the grip itself features an easy radius and width, the stock of the conventional game profile with a soft rubber buttpad.

At just 6lbs 2oz, even with the longer 30-inch barrels, the 12-bore First-E is probably one of the lightest of its type you’re likely to hold; the weight, or noticeable lack of it, belying the 47 5/8-inch overall length. Length of pull of 14 7/8-inches with a breaking weight of 6lbs 9oz, reach to the trigger is comfortable, even when wearing a more winter-orientated jacket, whilst the narrower profile of the stock promotes speed of mounting, an advantage for any shotgun that will be used primarily for rough shooting. What is unusual is the point of balance that’s approximately two inches forward of the hinges, placing the First-E’s bulk firmly in the shooter’s leading hand.

Shot as usual around Malmo Guns’ private layout, given this Marocchi’s weight and that the configuration is more walkedup orientated, with ½ and ¼ chokes fitted it was decided that the gun would be shot using the 32g fibrewad Cheddite Free Shots loaded with 6s. With the three-inch chambers, the First-E will happily discharge far more potent loads but even with a flat shooting 12g that does an excellent job of reducing felt recoil, any sustained shooting with loads larger that 32g will eventually take their toll.

With the weight as far forward as it is, the shooter does have to drive this Marocchi on a little bit. That said, the gun mounts very easily, the stock is noticeably comfortable, whilst the gun as a whole swings with ease, providing you remember to keep things moving. The trigger is crisp, creep free and predictive, whilst the chokes pattern well, the clay kills comprehensive.

Using a quality 30g game load, the First-E would make a reasonable driven game gun but the weight, feel, how it handles and all other physical aspects mean this Marocchi is a 12-bore that’s been designed to be easily carried over reasonable distances and an ideal companion for early season walked-up grouse. As to whether Marocchi designed the First-E with walking in mind remains to be seen but since the vast majority of European game shooting is walked-up, especially over pointers, it’s a reasonably safe bet that this was what the Italian maker had in mind. And as such, the First-E is conspicuously accomplished.

Equally, as a full sized 12- bore for women or younger shooters, the First-E would be a wise choice. The weight means it feels like a sub-gauge, whilst still delivering the stopping power of a 12g. All you need to do is match the ammo to the user to capitalise on the gun’s abilities, many more slightly built shooters usually preferring lighter loads, Cheddite producing some excellent examples.

I’ve always been a fan of Marocchi; as the years have passed I’ve shot and tested nearly every one they’ve made and visited the factory on a couple of occasions. And I never have been disappointed, their shotguns always living up to, or exceeding expectations. Marocchi’s combination of quality, design and value for money never failing them. At £1219 for what you see and get, the Marocchi tradition continues; looks that set it apart without shouting about it, nicely put together, shoots and handles well, if slightly differently from the norm, and for an Italian shotgun is relatively easy on the wallet.

Marocchi it would seem is back in UK business, all to the benefit of the British shooter. So, if you or yours are looking for a lighter 12-bore or a shotgun with which to walk with, as much as it’ll be shot with, then the First-E has to be a serious consideration.

With thanks to Malmo Guns, (www.malmoguns. com), for the provision of the 32g fibre Cheddite Free Shots cartridges and use of their private layout.