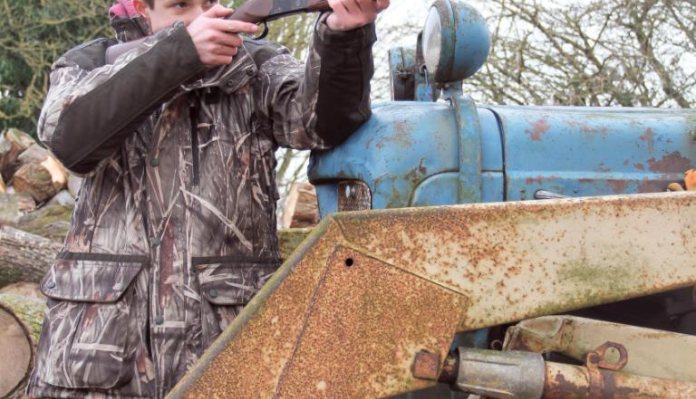 To me, small calibre shotguns make a lot of sense, their mild manners and light weight make them ideal for beginners and youngster to learn the techniques necessary to master a shotgun, yet provide an amazing degree of performance for the professional. .410s of yesteryear were usually a knackered old bolt action that probably propped up the pig shed door! Or, a single barrelled, sloppy-opening break barrel. Today, we have a plethora of really good, useful and affordable .410 shotguns to choose from, largely because of the incredible surge of guns from Turkey. Economies of scale and a cheaper labour force have brought some really nice little .410 shotguns to Britain and the Revo K226 is one of them. In fact, a Khan Arthemis model from Silah San, but K226 is all you really need to know. A smart, light, fixed-choked, single trigger, walnut stocked .410 for less than £430 quid!

I will start at the stock, as this is really where most of the Turkish shotguns can win over any competition, as the locale and natural abundance of walnut make Turkish shotguns thus clad really stand out. The diminutive Revo is no exception, the stock is very nicely shaped and there’s enough colour and grain from the walnut to make it interesting for the price. Ignore the thick matt lacquer that hides the subtle figuring beneath, although eminently weather proof, I guess it will mark with a white colour if scratched. There is no cheekpiece and only a small Schnabel tip to the forend, which is fine, as the Revo flies into the shoulder and the eye is perfectly aligned to the rib, with little or no cast.

There is a small soft black rubber recoil pad, with hard plastic top to ease the Revo to the shoulder without snagging. But what makes the K226 stand out, or spruce up its looks, is the fancy chequering. Here, you have a forend that has machine chequering with quite a good grip, as a single scimitar shape highlighted with three radial grooves. The pistol grip too has similar grip panels, with grooved enhancements, functional and more than good enough, with a slim grip to fit smaller hands well. Although the K226`s slim stock and forend looks and feels small, it has a 14.5-inch length of pull and feels right at home in my hefty mitts, as it does my son Jake’s.

Keeping it simple makes the Revo affordable at £424 and so 28-inch barrels only and fixed chokes, which makes real sense, no chokes to lose or worry over which choke to use, just load and go! There are reasonably well struck off ends of the barrels, ½ bottom and top Full choke, both a little open on this gun, although I have seen others shoot tighter.

You have a typical Monobloc construction, finished in a satin blue that suits the Revo`s hunting credentials and non-reflective qualities. You have a non-ejector system, which makes sense and keeps costs down and spent cases are easily removed from the Revo`s 3-inch chambers. The barrels are vented to the top rib, as well as between the barrels, which looks good and allows for more rapid cooling. The top rib is serrated and 7mm wide, with only a single gold bead at its tip, but as stated before, you look right down flat onto this.

The action is jewelled, which is revealed when it’s opened and the single strap type extractor is visible that lifts both cases at once. The action faces have the same satin blued finish, with a forward section that is bright blued and a target type logo for contrast. The top opening lever is quite stiff but locks the action very well and dropping the barrels cocks the action and sets the trigger and safety to ON.

The barrel selector on the tang is right for ‘U’ i.e. under, for bottom barrel or left to “O” i.e. over, for top barrel; it’s clear and easily operated. Trigger-wise, I really like it, as it has a very nice gold washed and quite straight trigger blade, which is smooth and the let off is very crisp in use.

All pattern boards where placed at 30-yards for this .410 bore and the Revo`s top barrel, i.e. full choke, was used. Normally, I test .410 cartridges at 25-yards and so I had fewer pellets in total on the pattern boards than normal.

The Fiocchis never disappoint and are really well-priced cartridges, with a very good performance to boot. They hold 19-grams of No. 6 shot, so great as an all-round load and at 30-yards had 112 pellets on the board, instead of 155 at 25-yards, interesting. These were spread into 38 pellets within the inner 15-inch circle and well distributed. The rest, 74 pellets, radiated outwards, so a very good coverage but a tad more spread than normal. Still, just how I like it, with a true 30-yard performing .410 for rabbit, pigeon or squirrels on the run.

These are 3-inch or 75mm length cases that hold 18 grams of No. 5 shot, so less pellets than the Fiocchis. They use a fibre wad and are smooth shooters. I had 92 pellets total hit the board at 30-yards and a very good, open but even, spread of shot. 70 of these were around the outer sectors and 22 within the inner circle. A bit sparse but I doubt anything would slip through.

This is a very nice shooting .410 round that has a 3-inch case holding 16-grams of No. 6 shot and uses a fibre wad. Full choke and 30-yards and you have 105 pellets total hitting the pattern boards, with a better overall spread than the rest of the cartridges tested. You had 37 pellet strikes to the inner 15-inches and 68 pellets to the outer portions, so nothing will escape or slip through this cartridge.

This is another red-cased, 3-inch case, although marked 73mm length and uses a plastic wad instead of fibre. I had the No 7 shot size with a 16-gram payload. Here, I had a good spread, although a little right biased. A total 119 pellets on the board and again a good inner count of 36 pellets and 83 pellets to the outer, so all bases covered.

It’s hard not to like the Revo, it is very cheap when you see how she performs on the pattern boards and handles in the shoulder. Sure, no ejectors or multi choke; you know what, you don`t need them, £424 buys you all you need. There is a Premium Game model for £449, which has 30-inch or 28-inch barrels and a more Game looking features.