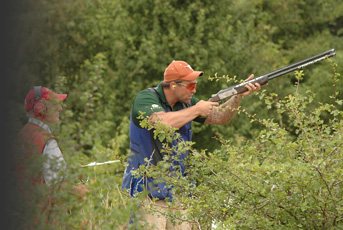 Walk into a gun shop and the range of guns on offer is simply astounding and for someone new to the sport can be a little bewildering. It’s important to have some idea of what it is that you want before you go shopping. As the chances are you might buy something you will later regret, along with the value depreciation that goes with it come trade-in time. As the majority of shooters take part at least initially in Sporting clays, rather than the specialised Trap or Skeet disciplines, I have put together a selection of the best buys on the market. It’s not exhaustive but as a rule of thumb you won’t go far wrong with one of these.

A more solid piece of German engineering would be hard to find. The K-80 has long been the preferred gun of DTL shooters and is now growing a strong following amongst Sporting shots, with its ironclad reliability, and added stability for follow up shots it has all the attributes to make it an excellent choice. This version has an adjustable High rib design that allows for better target acquisition and a more natural head up shooting style.

Excellent Hand made quality doesn’t come cheaply though and the looks are for some an acquired taste.

Another high rib design, the Impact is new for 2010 with the first deliveries expected shortly. The point of impact can be adjusted from shooting flat (ie 50.50) to up to 300% high. Touted as an all rounder the Impact allows shooters to compete in trap, skeet and sporting disciplines with just one gun that can be adjusted to suit all. Based on their successful Summit model it carries over many of its predecessor’s features such as eight chokes as standard and a high level of finish for a value for money price.

A well made, well priced innovative offering, though its black action won’t suit everyone.

Perazzi is the Ferrari of Italian competition shotguns, hand built to your own requirements they offer a completely bespoke service, or the off the shelf guns are of an equally high quality. Perazzi has been atop the podium in Sporting and Olympic events across the globe with 16 Time World Champion George Digweed using one to good effect. Lighter than a Krieghoff it is a slimmer design that tends to be quicker in the shoulder, though doesn’t have quite the stability of its German rival.

Fabulously engineered and elegant, pretty and functional but not cheap.

A brand that has become synonymous with good entry level guns over recent years. Inexpensive without looking cheap and nasty the Supersport has everything you would expect from a Sporter, multi-chokes, single selective trigger, a wide tapering rib and chrome-lined barrels. For the newcomer it ticks all the boxes and consequently has proved to be a big seller. Balance and handling are good but don’t expect it to be a match for the top line guns.

A great place to start, good looking and effective but remember it’s not a high quality, hand made item.

Another German engineering demonstration, Blaser’s reputation in rifle design has carried over well into shotguns and they have proved popular amongst competition shooters. Multiple World Champion John Bidwell is a long time convert and rates the gun above all others. As with some of the other guns here the Blaser is highly adjustable to suit individual’s needs and shooting style, the Stock balancer system allowing users to alter the weight distribution as required. As you would expect the sky is the limit if you wish to customize your gun with various grades of wood, engraving etc available.

Highly tuned to the needs of the competition shooter, a good bet but still quite a newcomer to the market.

Fabarm has produced some exciting guns in recent years, some with very avant garde styling. The New Elos is a solid sporter with a good pedigree, its titanium-coated receiver should mean durability and with its Tri-bore barrels Fabarm claims that steel shot can be used even when shooting full choke, something that most other manufacturers would shy away from suggesting. With an adjustable stock it certainly looks the part and is more traditionally styled than others from the stable such as the Axis.

Quality offering from an established manufacturer, though not seen in volumes yet in competition.

Miroku along with Browning and Beretta is one of the most popular brands for newcomers to the sport. The good quality, classic design, high resale values and ability to shoot well straight out of the box all work to make this a sensible choice. This version sports chokes from world renowned manufacturer Nigel Teague, and produces excellent patterns. Its long proven design and heritage make it practically bullet proof as far as reliability is concerned and is seen in action in the hands of shooters of all abilities. Top shot Graham Stirzaker has used the marque to good effect over the years, having won more than 100 major events with one.

It does all that you ask of it, without any fuss. A design classic but a bit long in the tooth for some.

Although it shares many aspects of the Miroku’s design the Heritage is an altogether more sophisticated offering. Launched recently it combines the fabulous Browning action that has been in production for decades with a new side plate design that has proved to be a winner for other manufacturers in recent years. The sideplates give the engravers a far larger canvas upon which to work and the game scene engraving on this model is very attractive. Being from so well proven an action the reliability is excellent and the gun features some very high quality woodwork and an excellent level of finish. It comes with Browning’s Invector choke system and has all the features a sporting shot would look for.

A pretty gun to look at and a good way for Browning fans to stand out from the crowd, but technically identical to a 525.

No market review would be complete without Beretta, and the Prevail is the Italian gun making dynasties latest competition offering. Although it may look similar to previous models; it’s a complete, ground-up redesign, that has seen a great deal of research and thought go into making it right. The action is now slimmer and lighter than before and features a quickly detachable trigger group and stock. Whilst there are a number of innovative features including the ability to change the gun from ejector to non ejector by the turn of a screwdriver. In combination with the Kick-off recoil reduction system it handles very well, being quite fast and whippy, so easily makes the transition to field use if required.

An excellent piece of design that has pedigree for success, though the plain Jane looks are aimed at conservative buyers.

Like its Browning and Miroku competitors the heart of this gun has been around for decades and consequently you know you are getting a well tried and tested design. Enormously popular on the competition circuit this is a design against which others are judged. It is stable without being slow and quick without being whippy.  It’s available in many configurations and with a large amount of after market tuning and customization options available, so it offers an excellent all round package. With the Prevail now on the scene it may well take a back seat but with second hand values holding up well it looks to remain a big seller at least on the used market for many years to come.

A safe buy and a trusted and dependable workhorse, however there are too many around to appeal to the shooter who likes to stand out from the crowd.

It’s difficult to pick out a clear winner here, but if money were no object then the Perazzi might well be my choice. It’s a well polished performer, quick and pointy so suits my shooting-style, it also has the flair that you would expect from the Italians. A close second would be the Krieghoff which is put together with the robustness of granite but it doesn’t suit the way I shoot. Both however have cast iron credentials.

If you are looking to choose your gun with your head and not your heart then go for one of the entry level Beretta’s, Browning’s or Miroku’s. The actions are well proven and resale is always good, they also tend to fit most people straight from the rack so you won’t need to have them altered.

If it was my money then I would have to plump for the Guerini, the new adjustable rib means it’s a lot of gun for the money. It’s not the sort of thing to shoot game with but as an out and out competition tool is excellent, effective and on my Christmas list already if anyone is listening…

So there you have it, just remember that you may well shoot with the gun you buy for ten years or more so make sure you like it and importantly that it fits correctly. On the other hand if you’re the kind of shooter who enjoys their retail therapy and changes guns every year then bear in mind resale values when making your choice.