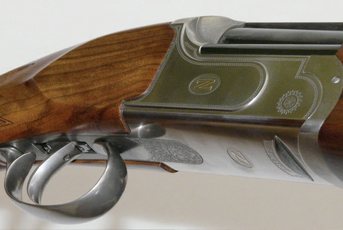 Whilst every top maker offers a selection of shotguns specifically designed for each of the various disciplines, there’s always one particular model that’ll bring them the recognition they seek and that’s their sporters. In the hands of a competent shooter there isn’t a clay target the sporting 12-bore can’t take on, any decent sporting layout incorporating crossers, going away birds, driven birds, rabbits, teal and virtually every other method of throwing a clay in every conceivable direction and line of flight. So if a top end sporter 12-bore will take them on and hit them then what better all-rounder is there.

And so we come to Zoli’s Z-Sport, the gun that embodies the ability to direct its muzzles towards all the aforementioned clay targets and see them all shatter on a regular basis - but that is on the proviso that you’re up to the job. If so, here could well be the 12-bore you’ve been looking for, a competition shotgun that apart from minimal ornamentation is there to do a job, that job being to gather in as many trophies and titles as you can enter.

Complete with a fitted travelling case, the instant you see the Z-Sport it’s obvious that this is a no frills competition gun. Good, strong straight grained oiled walnut forms the big sporter stock and elegant London-style Anson-latch forend. Fit and finish excellent. A thin soft rubber recoil pad completes the butt whilst neat panels of checkering have been cut into the open radius grip and forend, the only other addition being a deep machined ‘Z’ embossed medallion let into the grip’s pommel.

The gloss black 3” chambered 32” monobloc barrels are well struck, an almost imperceptible flare over the last three inches allowing for the fitment of the extended choke tubes. Once again these hint at this Zoli’s purpose, the set of six made up of Skeet 1 and 2, Improved Cylinder, Light Modified, Modified and Improved Modified, all of them forming the restrictions most competitive sporting shooters prefer.

The Boss-style derived boxlock, inertia driven action is typical of Zoli, with two large cut-outs either side of the standing breech allowing the extensions either side of the bottom chamber to roll into place and then lock out, securely holding the gun closed. Externally, the burnished silver finish gives the Z-Sport an elegant look whilst ensuring glare is kept to a minimum, a gold inlaid ‘Z’ is the only form of embellishment. Stippling encases the fences, the matte finish extended over the short throw top-lever, the only other addition to the top tang being the hatched manual safety and barrel selector, the location and design ensuring it falls easily beneath the thumb when the discharge order needs to be changed.

A feature of all Zoli shotguns is the detachable trigger mechanism. Removed in seconds by following the supplied instructions, should on the remotest chance a firing pin or coil spring break they can be replaced in minutes by either a competent gunsmith or by the shooter once they’ve been shown the correct procedure. And to ensure you have the spares to hand, a small case is supplied containing two spare firing pins and springs along with the appropriate hex key locating into the small key hole to the rear of the oversized, ovoid trigger guard.

Anyone who’s ever handled a top end competition 12-bore will immediately feel at home with this Zoli. Like all shotguns of this type the Z-Sport is a big gun, the reason being it’s designed for sustained shooting, the 9lbs weight and balance point directly beneath the hinges all there for a reason. Most competitions are set out over a hundred targets that will be shot on average over a two hour period, the weight and equilibrium of the Z-Sport meaning not only does the gun eliminate most of the potential felt recoil, the handling and physical characteristics work with the shooter allowing them to repeat the exact same mounting time and again whilst the feel and reaction of this Zoli never alters. In other words, whilst familiarity might breed contempt it also encourages consistency, something shooters of all levels should constantly strive for.

As regards the Z-Sport on test, the overall length of the gun including the ½” protrusion of the extended chokes was 50 1/8” with a barrel length of 32½”.  Drops at comb and heel are 1 5/16” and 1 15/16” which together give the shooter a slightly wider margin of error when having to mount ‘gun down’ on fast FITASC targets or similar, the view of the target along the 7-10mm tapered vented top rib, even if miss mounted, still sufficiently correct to achieve the correct muzzle-target picture. Length of pull as I had the gun set was 14¾” although this can be varied either way by around ¼” whilst still retaining the remarkably consistent 5lbs 1oz trigger weight. Hooking the Z-Sport up to the Arrow Laser Shot confirmed that my initial impressions that the gun would shoot slightly high for.

As regards the Z-Sport on test, the overall length of the gun including the ½” protrusion of the extended chokes was 50 1/8” with a barrel length of 32½”.  Drops at comb and heel are 1 5/16” and 1 15/16” which together give the shooter a slightly wider margin of error when having to mount ‘gun down’ on fast FITASC targets or similar, the view of the target along the 7-10mm tapered vented top rib, even if miss mounted, still sufficiently correct to achieve the correct muzzle-target picture. Length of pull as I had the gun set was 14¾” although this can be varied either way by around ¼” whilst still retaining the remarkably consistent 5lbs 1oz trigger weight. Hooking the Z-Sport up to the Arrow Laser Shot confirmed that my initial impressions that the gun would shoot slightly high for my own style was confirmed. That said, by pushing my head down ever so slightly the Z-Sport became flat in attitude, a physicality I personally look for in anything other than a trap gun.

But whilst the Z-Sport has been designed to shoot at the highest levels of the sport it certainly doesn’t preclude the gun from performing at its utmost around a Sunday morning 50-birder. Screwing Skeet 1 and Skeet 2 chokes into the muzzles and loading up with my favourite 28gram Eley VIP Sporting fibrewads, the Zoli was on the mark from the off, instantly highlighting its championship winning pedigree. Head hard down on the comb, the Zoli pulled birds out of the sky with ease, even a pair of almost unfeasible left to right crossers breaking at the extremity of their travel, the fact one shot eliminated the both confirmation of the quality of the chokes patterning and that with good quality cartridges, wider restrictions are all you actually need.

The overall size and weight of the Z-Sport ensures that whilst the gun easily changes direction it does so in a controlled manner, the attitude of the gun encouraging fluidity and control of movement a trait confirmed as the gun performed with equal balance and excellent results when shot over and additional couple of rounds of Skeet. Never once was the Z-Sport tiring to use, every part of the gun efficient from the shattering of the clays to the ease of opening, the fact the ejectors were so timed to allow the empties to be caught and thrown in the nearby bin and the fact the gun handles and moves equally well when open and waiting to be loaded.

If this were my Z-Sport my only modification would be to have the comb lowered by about 1/16”. But given this Zoli’s purpose in life along with the £5,611 price tag, it’s the type of competition 12-bore that I and anyone else considering buying one would have tailored to their physical needs. For me the gun as tested could be altered in a matter of hours in the hands of a qualified stocker or gunsmith but others may require a little more. But whether the Z-Sport is correct straight out of the box or needs some detailing, it doesn’t alter the fact that this Zoli was designed to be a winner and a gun that will grow and expand alongside the person shooting with it.

One argument you won’t hear from me is that the £5,611 isn’t an insignificant sum of money to invest in a shotgun. However, it’s well worth considering the cost of the Z-Sport in context with its immediate competition. Priced at least £1,000 less than the latest detachable trigger model of another well known Italian maker, the Z-Sport is already proven, is a more comfortable gun to shoot and compete with and more importantly feels like it was designed for the average human to hold.

A make and model that has achieved great success abroad, slowly but surely both Zoli and the Z-Sport are now finding their rightful place within the UK shooting fraternity. Similarly, it’s also safe to say that for the shooter looking for a high end competition 12-bore that can be fully customised should they so wish and that’s more than capable of turning its muzzles towards any clay target, Zoli’s Z-Sport has to be a serious contender. An excellent piece of kit as tested, for those wondering about the various barrel lengths and other options in this instance please visit Edgar Brothers’ website for full details, etc. GM