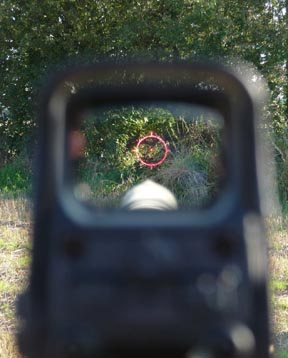 I expect most readers will already be aware of Hushpower’s moderated shotguns. Distributed by the Saddlery & Gunroom, the range includes single-shot models from Baikal, pump-actions from Mossberg and most recently a double-barrelled O/U model from Investarm. I hope to review the latter in due course, but it is the Mossberg that is the subject of this article.

Based on the tried-and-tested 500-series, versions are available in .410, 20g and 12g, in both 2+1 (Section 2) and 5+1 (Section 1) formats. Whilst I like the little .410, my own choice went to the more versatile 12g. It wasn’t just the facility for a quick second shot that won me over either: in my experience, whilst the single-barrelled guns are quieter than the pumps, they are not as powerful. I put this down to the un-moderated section of the barrel being shorter on the S/B guns than on the pumps (where the moderator cannot start until the barrel clears the magazine end cap) and so lowering pressures sooner. Whatever the reason, I was happy to give up a degree of suppression in exchange for range.

In itself the Mossberg 500 is a straightforwardly reliable pump-action shotgun, but essentially without refinement, so expect plain woodwork, a mushy trigger, and a rattlesome fore-end.

The Hushpower version is supplied with two barrels. The standard barrel shows a 28” tube, featuring a set of flip-reducing ports near the muzzle, a basic interchangeable choke system, and a vented rib fitted with a white intermediate and a silver muzzle bead. The moderated barrel, meanwhile, is based on a rib-less 28” tube, the last few inches of which are drilled with 4 rows of 2 or 3 ports spaced evenly around the bore and housed in an aluminium tube that contains 8 baffles and projects 9.5” ahead of the 3/4-choked muzzle. The moderator can notionally be stripped for cleaning but I’ve yet to get mine unscrewed.

The size of the moderator means that the gun is inevitably muzzle heavy with the suppressed barrel fitted, but in practice the imbalance is not as excessive as it appears to the eye, thanks to the use of lightweight alloy in the moderator’s build and the fact that much of its volume is necessarily empty space. All the same, it does take a bit of getting used to before you start to hit moving targets with anything like the instinct of an un-moderated gun. That said, once you get it swinging, it just keeps on going!

Although you can feed a Hushpowered shotgun high-velocity cartridges, there’s not much point, since no amount of suppression at the muzzle will stop the supersonic crack of the shot as it flies through the air. Consequently it’s worth investing in some subsonic cartridges, such as those specifically loaded by Eley for these guns. For some reason, however, these are only available in 32g #6, and 28g #7 ½ and #8 shot loads, which is OK for pigeons, doves and clays, but less than ideal for rabbits and crows. What’s more, given the same MV, the larger shot retains its energy better, extending the effective range by a few useful yards.

I liked the Hushpower Mossberg enough to buy one, but soon I started to look into ways of enhancing its handling and effectiveness. Fortunately there are lots of after-market accessories for this model, though most only fit the 12g version. My first move was to order a Hogue over-moulded stock and forend to replace the factory woodwork. Hogue’s stippled rubber grips usually provide excellent grip, but in the case of the Mossberg I found that whilst the forend lived up to expectations, the pistol grip was too thick and too tightly radiused for a good hold, making the gun very uncomfortable to use, so it was time for a re-think.

In the end, the answer to the problem of how to get better grip and control over the Mossberg’s graunchy trigger was to fit one of ATI’s rugged but inexpensive AR-style collapsible stock and pistol-grip sets. This came complete with adapters for Winchester, Remington and Mossberg pumps, as well as a soft rubber butt pad, and took less than 15 minutes to fit.

The new stock raised the sightline, however, making the gun shoot higher than before. As it happens, I had already identified sighting as an area that required attention, since the lack of a rib on the moderated barrel and the raised position of the bead at the end of the moderator together make it hard to judge where the shot pattern will be centred. Consequently, I added a Mossberg Weaver rail, for which the receiver is already drilled and tapped, and onto this I fitted an Eotech holographic sight.

As the Eotech is designed for use with ARs, the sight-line is perfectly matched to the ATI stock. Moreover, the field of view is wide, and the parallax-free design ensures that you always know where the centre of the pattern will be, even if you are less than consistent in mounting the gun.

With the stock, grip, fore-end and sights sorted, it was time to fit a sling - an essential on any rough-shooting gun. The ATI stock was already fitted with a swivel stud, and the magazine end cap drilled and tapped for one, so I contacted Vic and Cheryl Havlin at www.havlinsales.com in the US, who specialise in Mossberg spares (plus a friendly and efficient service), and ordered suitable studs for both barrels. With these fitted I selected a camouflage neoprene sling from the wide selection at my local gun shop and attached it to the studs with a pair of Quake QD swivels from my spares box.

That camo sling got me thinking too. I’d noticed that quarry was often spooked by the sight of the Hushpower’s big black moderator swinging on to them –and who can blame them!- and decided it could do with some camouflage too. Initially I applied some tape, but it soon got tatty so I looked around for a neoprene cover. Unfortunately, all the standard designs were either too narrow or too short for the Hushpower. This time it was that excellent forum, www.airgunbbs.com, sponsored by J.S. Ramsbottom, that came to the rescue, in the shape of a member called William, who took down the relevant dimensions, offered me a choice of camo fabrics and in no time at all had run me up a tailor-made sleeve that hides and protects the moderator beautifully – and all for just £14.

My final goal was to obtain some improved ammunition. Eley were prepared to load some other shot sizes - but only if I ordered 50,000! - so I decided to buy a press and load my own. Having got a second-hand MEC press running again with the help of Ian Charlton of Clay and Game Reloaders (www.claygame.co.uk), I took some of the Eley cartridges apart, examined their components, laid in a supply of suitable shot, powder and fibre wads, and began a series of iterations that ultimately produced a potent subsonic load throwing 33g of #4 shot and capable of flattening a rabbit or crow at 45 yards.

The Mossberg wasn’t bad to start with, but it’s now one of my favourite pest control tools – quiet enough not to cause undue disturbance to quarry, livestock or neighbours, but versatile and powerful enough to take down anything on the General List at normal shotgun ranges.