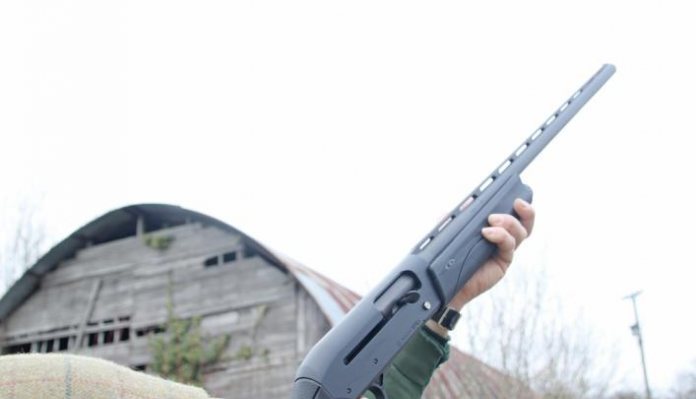 Having tested the classic Remington 1100 a few months ago, I was only too keen to look at their more recent take on a semi-auto, in the form of the V3. Introduced in 2010 and originally called the Versamax, it offers some fresh ideas to the traditional, self-loading system.

My first impression was: “that’s a different sort of gas system”. Although it did seem vaguely familiar, at which point I had to defer to the editor’s superior knowledge and he soon put me right. It’s similar to the old US M1 Carbine, which uses a short stroke tappet (piston) that knocks the operating rod rearwards. Called VERSAPORT ADVANTAGE it’s more sophisticated and versatile. There are a number of holes (gas ports) drilled into the chamber, with twin pistons located on the outside in tubes, which connect to the gas ports.

On firing, gas passes into the tubes and pushes back on the pistons and, depending on the power/length of the cartridge, it depends on how many ports are uncovered and how much gas is transferred. So, for example, when using longer 3-inches shells, four ports are exposed, but a 2¾-inches or shorter, all eight are utilised, so allowing more gas to be used, thus letting the Remington self-adjust to function properly when using lighter loads. Remington also took the opportunity to move the recoil spring from the butt and use two slimmer ones inside the receiver.

When I put the Remington together, the first thing I noticed was the weight, or rather lack of it, in comparison to the 1100 and also the balance. Both were spot on, it weighs in at just over 7lbs, according to my scales, and even though the stock is too short for me, it came up well not feeling in any way unbalanced or cumbersome. The test gun has a 28-inches barrel and length of pull of 14¼-inches, giving an overall length of 49-inches. It is, as one would expect, a multi choke and is supplied with three; Improved Cylinder, Half and Full. Full is not rated for steel shot and marked ‘lead only’.

The barrel has a vented rib, which is finished with a white bead, with a secondary, brass one midway along it. The furniture is black synthetic and has been moulded to feel very comfortable in the hands, the stock is finished with a supercell recoil pad, which can be unscrewed to fit extra spacers if so desired, to obtain the correct length of pull with others for vertical adjustments too. There is a sling swivel stud fitted to the forend and the butt has a point of attachment aperture as part of its moulding. Trigger pull was crisp with no creep felt and not any heavier than needed, the cross-bolt safety is located to the rear of the trigger guard, as is the norm with shotguns of this type, it did not stick and was positive in its movement. There is also a magazine cut off, which lets the shooter hold the shell lifter in the raised position, which then means that the chambered cartridge can be removed without the next one in the magazine dropping down to be chambered.

On shooting, the V3 comes to the shoulder very well and exhibits all the pointability that quite frankly all shotguns worth owning seem to have nowadays. Certainly, for me, once I had lengthened the stock, to 15½-inches, to fit me properly, I could just throw it up and the sight picture was what I wanted to see and my head position on the butt felt both comfortable and natural. Every so often you pick up a gun, mount it and think I just cannot miss, even though you invariably do; the V3, for me, is one of those guns.

Consequently, it shot where I was pointing it on a pattern board and on the whole hit the quarry I was aiming at too, including a pair of carrion crows I was particularly proud of. During the test period, I had no problems with stoppages, although I did not have the opportunity to get it really hot to properly stretch it. As to cartridges, I used a variety of loads from 21 through to 36-grams and they all cycled the action. I was most impressed that the 21s caused no problems, as it is quite common for semiautos to not work with such light charges. The 36-gram shells did not feel unduly harsh on the shoulder and as one would expect cycled the action with no problems, all the different loads regardless of brand, brass height, case type or load worked in this shotgun 100%.

The majority of the testing I did with this Remington was when at work on my game shoot, much of the time it was with me in the truck and I would dive out to have a shot at my intended quarry. There was also quite a bit of time spent walking with the V3 and although very few shots were fired, if you spend much time walking with a shotgun you soon find out its short cummings! I am sure that to some shooters there will some, but for me there were none, except it does throw the fired cases out quite a long way, which do take some finding.

As I said earlier, the test model was in the black synthetic but there are various cammo patterns available and a wooden stocked version too, so plenty to choose from. I was impressed with this shotgun; it handles well, is balanced and points naturally, not too heavy and cycled every cartridge load I put through it, so what is there not to like? Finally, would I have one? Well yes, I would be more than happy to have one in my cabinet.