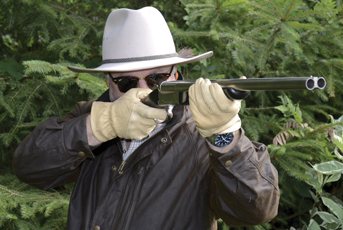 To try and describe Boito’s Brazilian built shotguns as elegant would be a waste of both my time and yours, but they are no-frills, basic smoothbores that have been designed and constructed to work day after day in every kind of inhospitable environment. They are incredibly popular in South America, Africa and Australia - the countries and continents that have taken them to their hearts – which is a glowing endorsement to the rugged durability of Boito’s guns. They also retail at a price that makes them popular too!

Built like the proverbial tank, the A680 Coach Gun on test more or less personifies the Boito creed. One of the most solid 12 bores you’re likely to ever hold, the lack of frills and ornamentation along with the general feel shouts the fact that this is a 12 bore meant to work well rather than look good. If Boito’s A680 has a significant downside over here in the UK it’s that as a Section 1 Firearm ownership could well be both restricted and restrictive but that I‘m afraid is down to you and your local Police force.

Like all Boitos the A680 comes in a plastic bubble pack that contains nothing more than the gun. Reason being there aren’t any accessories for it other than maybe an aftermarket sling which you’ll have to buy as a separate item; Highland Outdoors can supply one should you so desire. Awaiting you once you’ve removed the clear lid and protective waxed paper is a side- by-side boxlock 12 bore with silver nickel plating covering every part of the metal work, and plain black painted hardwood stock.

Before you even take a look at the rest of the Boito A680, the first thing you notice is that the barrels are only 20” long hence the A680’s Section 1 status, 24” being the legal limit for a standard SGC rated shotgun. Dominated by a raised 7mm live pigeon style rib, complete with a small brass bead, the muzzles are fixed to 1?4 choking in the left barrel, cylinder in the right. Interestingly, whilst the top rib is solid, to dissipate the heat that builds up in the short tubes, turn the barrels over and the jointing rib is vented all the way down to the forend latch.

The 3” monobloc chambers feature lifters rather than ejectors, so you have to physically remove the spent cases. Two huge lumps allow the barrels to attach to the basic boxlock action, two long cocking levers protruding from the knuckles. Interestingly, the action has disc- set strikers, a feature normally associated with far more expensive shotguns and a facility that allows for easy cleaning and maintenance. Plain apart from the maker’s name of E.R. Amanto, it’s the nickel finish that provides the only ornamentation.

A wide trigger-guard encircles the double triggers whilst a short top-lever and automatic safety sit in the usual places on the top strap. Where the action profile is unusual is around the fences, deep scallops on either side having reduced the normal humps eliminating the usual view over or between what the trade usually refer to as the ‘Queen’s Backside’. As stylish as they are practical these two indentations actually add an interesting visual effect to the actual practicalities of their inclusion into the action.

The stock is of the standard game style with an ambidextrous semi-pistol grip, two panels of chequering and a simple black plastic butt plate. Where the American influence is obvious is in the forend. Called a Beaver – style since the flat, wide design emulates a beaver’s tail and has a wide panel of chequering along its base and still a popular design on many American guns especially side- by-side trap models where it positions the gun in a flat and solid fashion in the hand.

Just because the A680 has 20” barrels doesn’t mean the rest of the gun is short, quite the contrary the main dimensions as good as any you’ll find on some far more expensive, more conventional 12 bores. The overall weight is 6lbs 10oz so don’t for a moment think the short barrels have resulted in a lightweight shotgun. Length wise the A680 measures just 36” with a 14 15/16” length of pull to the front trigger-blade coupled to what are actually rather heavy trigger pulls, a heave of 9lbs required to reach the break on either barrel. Drops at comb and heal are 1 5/16” and 2 5/8” so once again its all full sized apart from the tubes. The stock is rather comfortable, and a session with the Arrow Laser Shot confirmed that the A680 is remarkably flat irrespective of the fact it looks remarkably like a live pigeon gun.

This gun feels purposeful the moment you hold it, the wide forend fills your lead hand, the balance directly beneath the chambers and a grip that allows you to keep the gun moving. The stock finds your
shoulder pocket and aligns the gun to your sight perfectly.

Loading up initially with 28 gram Eley VIP Sporting, the A680’s ability to annihilate clays was stunning, the shortness of the barrels allowing the weight to sit perfectly between both hands whilst the swing is instant, the lack of length meaning there’s actually nothing you have to impart movement into.

Upping the load size to 30 gram Eley Pigeon made the end result even more impressive although the final step up to 42 gram Alphamax Magnums resulted in levels of recoil you’d prefer to reserve for just the occasional outing.

Switching to clays hooked onto sticks at around twenty yards simulating Cowboy Action style shooting, you’d have to be pointing the gun a hundred and eighty degrees the wrong way to miss. Finally, after my friends at Bond & Bywater set up an impromptu skeet layout, whilst the A680 is not exactly an acceptable competition shotgun, if it were there’s every chance you’d quickly become a skeet champion within a matter of weeks, the 1?4 and cylinder fixed chokes ensuring shot spread is more or less instant.