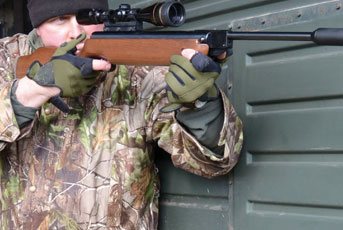 Power was clearly the main brief, and given the lack of restrictions Stateside, designers were given free reign to let their technical drawings do the talking. ‘Oversized’, ‘beefy’, and ‘heavyweight’, join a list of superlatives that define this classic model, from one of the most famous names in spring powered airguns. As joint ventures go, this was definitely one for the record books

Beeman’s R1 derivative (effectively the HW80 but with distinctively customized woodwork for the American market) gave him a powerful model in his prolific product range at the time; bringing added kudos to his standing in the industry. Whilst the HW80 itself went on to cement a permanent position in Weihrauch’s own product range, earning an army of fans in the process.

The laws of physics largely dictate the power output and efficiency of traditional spring powered guns, so with this in mind, the HW80 blueprint starts with an ultra large cylinder, 1 3/8inch in diameter, and just shy of 13inches in length. Given the right internal components and set-up, the resultant swept volume of air means this model is capable of generating an impressive 24ftlb in .22 calibre, making it potentially one of the most potent springers on the market.

Power is nothing without control as they say, or accuracy in the case of airguns, and of course, with Weihrauch’s top class build quality, not to mention their own high grade barrel tubing, the result is an airgun with an understandably wide fan base.  Of course, FAC power levels require an Firearms Certificate, which can be an unnecessary fuss in the eyes of many; but for those able to satisfy the criteria, the HW80 represents a satisfying venture into high power airgun shooting.

For non FAC UK shooters, the fact that ‘80’s sold here have to comply with our 12ft/lbs kinetic energy limit, effectively means that this beast of a rifle is running at way below its potential output. The up side to this, is that in most respects, the HW80 is over-engineered; meaning all the components are working at a level where they are placed under far less stress than would otherwise be the case.

So let’s recap at this stage. The HW80 is a full power break barrel airgun, designed specifically to cater for the high power marketand as such, is configured with oversized components, built to withstand the rigours of FAC performance. So running at 12ft/lbs (the UK legal limit) is just like a car engine permanently on ‘idle’.

The German company have always been known for the quality of their timber, and this latest ’80 keeps that tradition going in style. The latest spec lacks the dynamic visuals of this model when it was first released, back in the 1980’s, yet in place of those satisfyingly angular lines, the now rounded off fore-end, whilst a little vague, is undeniably comfortable. Staying with the furniture, I’m pleased to acknowledge the return of deep cut chequering around the grip - something that the German company has always been known for, yet seemed to temporarily veer away from.

Overall, that silky smooth, medium brown lacquer, is extremely attractive, setting off the beech by allowing plenty of grain pattern to show through. My only criticism concerns the cheek piece, which I would still prefer to be just a little higher and more boldly styled.

Action wise, the quality of the chemical blueing and wood to metal fit is first class; although Weihrauch still persist in vandalizing their own rifles, with the inclusion of those safety instructions, crudely stamped into the side of the cylinder. This maybe acceptable on a bargain basement starter gun, but not on a serious piece of machinery like the ’80!!

This HW80 model is the ‘k’, which is the shorter barrelled carbine version, complete with factory fitted silencer. This excellent design is still one of the quietest performers on the market, featuring as it does, a series of baffles that look suspiciously like hair curlers. The end result is a moddy that earns respect and certainly looks the part. The matt black coating is smart and highly practical for field use, and the simple screw-fit to the muzzle also means it can be removed quickly and easily; allowing for barrel cleaning for example.

On the range, the firing cycle of this latest ‘80 felt notably slick, with a small jolt required to nudge open the breech, and a very manageable, super smooth cocking stroke. Quality spring guns such as this have slowly improved over the years, and the lack of significant spring resonance, achieved by the use of spring guides and dampening devices, is most marked.

Many Weihrauch owners will know what I mean when I highlight the satisfying clicks at this stage; namely at the end of the cocking stroke, as the piston is engaged, and the auto safety is set. Fine engineering stands out, and once cocked, the fact that the barrel stays snugly supported within the breech, is testament to the correct tension within the jaws. Confidence stems from such detail.  As does the inclusion of the renowned Rekord trigger unit. Accuracy will always be enhanced by this excellent benchmark design, which continues to offer subtle, crisp release points, to discerning shooters who happen to appreciate the finer points of marksmanship.

At 8.6lbs, this gun is not for the feint hearted, yet bear in mind how weight and mass in general, can play a big part in absorbing recoil, and be an aid to steady shooting in many scenarios, and the issue is clearly complex. I found shooting the ’80 from a rested or sitting position very satisfying, but more of a handful in the standing position. As usual it’s a matter of personal taste and compromise.

One criticism highlighted by this test concerned the breech. Having shot many guns from this illustrious stable over the years, I was surprised to encounter a sloppy feed into the breech itself. All pellets tested, proved loose and dropped straight into the lip of the barrel - very unusual from this manufacturer. The breech, whilst visually an extremely well engineered design, appeared to have been machined with a chamfer, with the result that several brands of pellet tested, were all a slack fit - just dropping straight into the lip of the breech, rather than connecting gently with the rifling. Whether this is by design at the factory, I’m not sure, but not being able to ‘feel’  pellets into the rifling itself, is less than ideal, and prevents the identification of a loose or tight fitting pellet as it is chambered. Breech lock-up, I should point out, was solid and faultless, as expected.

Using Air Arms Diabolo’s, 3/4inch groups were the norm, but knowing what Weihrauch’s are normally capable of, I just had to try alternative ammo.  With my perseverance rewarded with tight sub half inch clusters using RWS Superfields, my confidence in the ’80 was largely restored, despite its apparent idiosyncrasies.

‘Simply stunning’, best describes the consistency of this model, with my chronograph recording some truly remarkable figures over ten shots strings: 5fps with Air Arms Diabolo Field, and 3fps with RWS Superfield for the record.

Weihrauch’s heavy-weight classic has certainly come a long way. What started out as an exercise in kinetic energy output, has certainly stayed the course, with appeal across the board. Immaculate finish, and precision engineered components, coupled with that oversized configuration, continue to give the classy HW80 a deserved reputation. In short, it’s a full powered adult rifle, capable of taking FAC performance in its stride for those authorized to take the plunge, or run happily at the legal limit.

On that basis, if the weight doesn’t put you off, then this timeless best seller surely represents the pinnacle of production break barrel design, whichever path you choose. GM