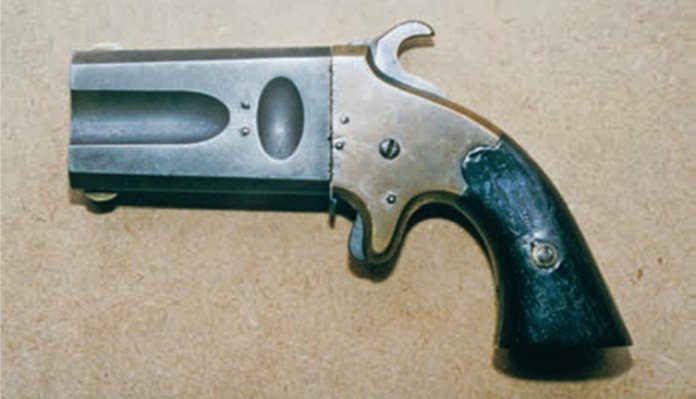 Television and the movies will tell you that the West was won by the Winchester rifle and the Colt Single Action Army revolver, but we now know that this was not the case. While these two stalwarts doubtless played more than a small part in shaping the history of that great continent from 1873 onwards, their relatively high prices would be a barrier to ownership for many. It may seem strange, therefore, that alongside established ‘classic’ cartridges such as the .45 Colt and .45-70 government, we should find a puny little offering in the shape of a low powered rimfire number of dubious merit. The fact is, by the time 1873 dawned and we saw the introduction of the above firearms icons, the .41 short rimfire had been around for over a decade.

On the night of April 14th 1865, Abraham Lincoln, his wife and their friends were watching a performance at Ford’s Theatre in Washington. At 10.15 pm, local actor John Wilkes Booth entered the president’s private box and shot Lincoln in the back of the head. Death was not instantaneous, but Lincoln died shortly after 7.00 am the next morning.

The pistol Booth used was a small, single-shot percussion model of .41 calibre, manufactured by Henry Deringer. From this day on, Henry Deringer’s name would become synonymous with small, low powered pistols, with a capacity of one or more cartridges, that could be easily concealed in a pocket or lady’s purse.

Subsequently, whenever similar crimes were committed, the weapon was often described as a ‘Deringer-type’, and because of some newspaper reports incorrectly spelling Deringer’s name with double ‘r’, and the ‘type’ being gradually omitted, the upper case ‘D’ was dropped and the name derringer was applied to any pistol that fitted into this class. Thus, a new word was added to the dictionary.

Although the patent owned by Smith & Wesson effectively gave them exclusive rights to manufacture breech-loading revolvers until 1869, there was no control over the production of cartridge pistols which eliminated the cylinder and loaded directly into the breech.

As early as the beginning of the Civil War, the Moore’s Patent Firearms Manufacturing Company was making a single shot derringer chambered for a .41 calibre rimfire cartridge. In 1865, Moore was taken over by the National Arms Company of Brooklyn, who in turn was acquired by Colt in 1870. By the time that Colt had bought this company, it is estimated that some 6000 of the all-metal derringers had been produced. Colt continued production of this model, known as the National No. 1, along with the National No. 2 model, under their own name and also introduced another example patented by Alexander Thuer, known as the Colt No. 3 derringer. Around 1871, the Colt House and Cloverleaf revolvers made their appearance, both chambered for the .41 rimfire cartridge. Shortly afterwards their New Line revolvers were also offered in this calibre.

The single-shot derringers proved to be a very popular option for the .41 calibre and as well as those already mentioned, examples were produced by Remington, Marlin, Ballard, Forehand & Wadsworth, Starr, and Williamson. The latter model could also accept an auxiliary percussion chamber, allowing the use of loose powder and ball with a standard percussion cap for ignition.

The Southerner was made by both Brown Manufacturing and the Merrimack Arms Co. Examples will be found with one of these names on the side of the barrel, while the similar-looking XL derringer was manufactured by Hopkins & Allen, although the company name does not appear on the guns.

Perhaps the most famous of the .41 short rimfire derringers is the Remington Model 95 over & under model. Some 150,000 units were turned out in a production run of almost 70 years, ending in 1935. Some years ago, Uberti offered a reproduction of this pistol chambered for .45 Colt, which proved to be quite a handful!

So, while the .41 short rimfire is a rather insignificant little number in its own right, the sheer volume of derringers made in this calibre, many by some of the most famous names in American gun making, elevates it to ‘Cowboy Classic’ status.

The .41 short rimfire, as used in the single-shot derringers, was an extremely low-powered round. The relatively large bore size was presumably seen as a deterrent rather than an actual danger, although at point-blank range it is possible that it could cause serious injury and perhaps death. A quote from Barnes’ Cartridges of the World states that ‘Fired from the average derringer at a tree or hard object 15 to 25 yards away, the bullet will often bounce back and land at your feet’. Barnes states that the original loading was a 130-grain, outside-lubricated lead bullet in front of 13-grains of black powder and would be of little use against anything other than rats, mice and small birds. The overall length of the cartridge was less than 1”.

The Colt revolvers mentioned above, along with numerous ‘Suicide Special’ revolvers made by various manufacturers, were chambered for the .41 long rimfire cartridges but were commonly used with the more readily available .41 short. The long version was merely an elongated case with a different bullet and/or powder charge. Winchester’s .41 long used the same 130-grain bullet with 16-grains of powder, while the Union Metallic Cartridge Co. used the 13-grain powder charge behind a 163-grain bullet. A number of cheap, single-shot rifles were made in this longer version. The .41 short rimfire has been obsolete for over 70 years, although some limited runs of ammunition have been made in the United States since World War II.