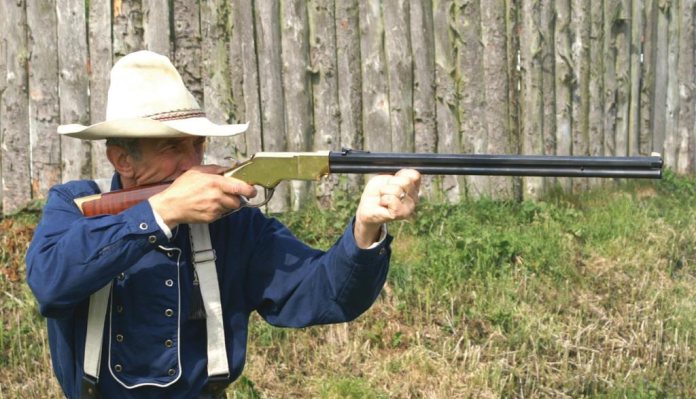 The Winchester Model 1873 rifle has often been called ‘the gun that won the west’ and its original chambering, the .44 Winchester Centrefire, was said to have killed more game than any other cartridge. While both of these statements are probably a little wide of the mark, there is no doubt that this rifle and cartridge combination played an important part in the lives of many Americans in the last quarter of the 19th century. Although the company had some success with the Model 1866, that rifle, and its predecessor the Henry, both used .44 rimfire cartridges. This cartridge was manufactured using a copper case with a folded head, thin enough to allow the firing pin to crush the priming mixture in the rim, which in turn meant that breech pressure had to be kept fairly low to avoid case ruptures. The use of a brass frame in both models was another reason to keep pressures down and, although the rifles could boast a bit of firepower, the cartridge came up a little short in the ballistics department.

Because this .44 calibre cartridge was loaded with 40-grains of powder, the official .44 W.C.F. designation was soon shortened to .44-40, and this type of abbreviated description was carried through to many other black powder era cartridges. While today this round is classed as a ‘pistol calibre’, and back in 1873 was still loaded, of course, with black powder, the permutation of a thickerwalled brass case and a steel-framed rifle meant that the power output could nevertheless be increased. However, it is still relatively weak by today’s rifle standards. Added to this was the fact that this new centrefire case could be reloaded, which, just as it does today, kept the cost of shooting down. The new rifle and cartridge were winners right from the start and continued at the forefront of the lighter weight rifles and cartridges up to the advent of the Winchester 1894 rifle and the .30-30 cartridge. When Winchester introduced their Model 1892 rifle, the .44-40 was again the principal chambering.

In 1878, when Colt began chambering their Single Action Army revolver for this cartridge and named it the Frontier Six Shooter, they started a trend which continues today, that of a rifle/ pistol combination sharing the same cartridge. Cowboy Action Shooting (CAS) will no doubt have influenced manufacturers of reproduction lever-action rifles to introduce their products in pistol calibres such as .38/.357 and .44Spl/Mag to suit current handgun models. It made sense 130 years ago and still does today.

Relatively obsolete 50 years ago, the .44-40 is another of the old-timers that has been given a new lease of life by CAS. Because of its comparatively low power as a rifle round, this cartridge will today find the majority of its supporters in CAS events, although there will doubtless be a few still using it for hunting small game in the USA.

Over the years, the .44-40 has gained a bit of a reputation for being difficult to reload. This has come about principally because the brass at the neck of the case is relatively thin and can be crushed quite easily by heavy-handed reloaders. A little extra care is needed when seating the bullet to overcome this minor drawback. I always twist the case with the forefinger and thumb of my left hand as it is entering the bullet seating die. The same process works with the resizing die; gently ease the die over the case mouth as you turn it. Bringing the press handle down too swiftly without lining up the case correctly will almost certainly result in the case being thrown away due to a badly damaged mouth. I cannot remember the last time that I lost a case during the loading process.

Remember that this case is slightly bottle-necked, necessitating the use of steel dies, and must be lubed before resizing. You can do this by using the lubrication in a tube, the roll-on pad or the spray types.

Because this cartridge has been around for a long time, and with the renewed interest through CAS, there is a wealth of reloading information for today’s shooters. Most data will be centred around a 200-grain, round nose, flat point lead bullet with a .427” or .429” diameter, and both of these are readily available from most gun shops. The nominal bore diameter of the original Winchesters was .427” and most of the modern replicas will handle this bullet very successfully, although it may pay to slug the bore on your particular firearm to make sure.

I own two rifles in this calibre, an Armi Sport 1892 and a Uberti Henry. I found that by running the .429” bullets through a .427” sizing die that they load just that bit easier. I was forced to do this a while back when I could only get the larger size. Whether resizing actually makes any difference I’m not sure, but I feel it does so I’m sticking with it. At least I know that my bullets are all exactly .427”.

If you wish to cast your own bullets then you can opt for a different weight, and the major manufacturers will have one or more suitable moulds in their line-up. From 200 up to 215-grain is the usual range, although Winchester offers a factory load with 225-grain bullets.

The American writer and Western gun aficionado, Mike Venturino, highly rates the .428”, 214-grain bullet cast from RCBS mould #44-200FN. When choosing a bullet remember to take into consideration the position of the crimping groove, as the cartridge Maximum Overall Length (MOL) is 1.592”, which is important in lever-action rifles. If the round is too long (as often happens when using much heavier .44Spl/Mag bullets) or too short, it will not allow the cartridge elevator to function properly. Likewise, the crimp groove must be deep enough to allow a fairly good crimp, otherwise, bullets can be pushed back into their cases by the spring in the tubular magazine, again resulting in elevator problems. If you are using bullets without a crimp groove, then purchasing a Lee factory crimp die will be a big help.

As stated, there is a lot of loading data for this cartridge and your favourite powder manufacturer is almost certain to include one or more options in their lists. An exception is, once again, the Finnish Vihtavuori company. Although they have introduced a dedicated CAS powder, Tin Star (code number N32C), at the time of writing, they did not include any .44-40 data in their reloading guide, for this or any other of their powders. You will remember from the .45 Colt article that there was no Tin Star data available for that calibre either. Some years ago I contacted them directly to query this anomaly but did not receive an answer. I am perplexed as to how they can introduce a speciality powder and then omit two of the most popular calibres that the powder would be used for. Perhaps if the enquiry had come from the United States, where CAS has thousands of followers, then they may have seen the error of their ways. Notwithstanding the lack of information, I did load some Tin Star in .44-40 using 6.5-grains of powder with the 200-grain bullet. I did not particularly test for accuracy, but the recoil was very mild and pleasing from the CAS point of view, there is a little white smoke, reminiscent of black powder but without the mess. I stress that this load is not a recommendation and you use it at your own risk.

If you wish to load black powder for this calibre then it will work very well, as the cartridge was designed for it. However, you will notice that whatever brand of case you use, you may struggle to get 40-grains of powder into the modern variants. I think that the maximum load of FFFg I have managed is around 37-grains for the .44-40. This phenomenon will be encountered with all of the early black powder era cartridges, as back then the cases were of the ‘balloon head’ type. These had a folded rim, similar in design to a rimfire case, which accepted a little more powder. They were inherently weak and often resulted in head separation. Remember the trouble that the troopers had at Little Big Horn with their trapdoor Springfields?

My favourite load for this cartridge is 8-grains of Alliant Unique powder with the store-bought 200-grain bullets, sized down from .429” to .427”. I use Winchester, Starline and Imperial cases and any large pistol primers that are available. The load works well in both of my rifles and I also used this load in my revolvers pre-1997. There are a number of currently manufactured rifles in this calibre so check through the manufacturers’ catalogues to find one that suits you.

As well as Venturino’s book, ‘Shooting Lever Guns of the Old West’, I would recommend ‘Black Powder and the Old West’, a SHOOT! magazine CAS special edition.