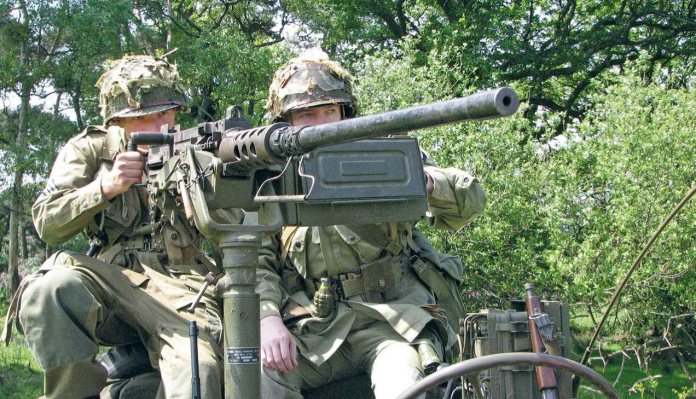 Machine guns appear in all shapes and sizes and some are sufficiently versatile to be used in a variety of roles, capable of being used on land, at sea and in the air. One which fits into that category is the Browning .50 calibre heavy machine gun. Its origins can be traced back to the closing months of WWI, when the commander of the American Expeditionary Force, General John Pershing, asked the Army Ordnance Department to design a heavy machine gun with a calibre of at least .50. By coincidence, the weapon designer John Moses Browning was already investigating ways in which he could develop a heavier version of his M1917 machine gun.

Working models were produced for field trials by October 1918, but the rate of fire was slow and whilst the concept was proven, it showed there was still some work to be done. Also, the velocity of the ammunition was only 2,300 FPS, which was less than what the army was looking for. However, Winchester looked at the ammunition and developed a round that reached a velocity of 2,750 FPS, which exceeded military requirements.

Meanwhile, the development of the weapon proceeded through the 1920s and when Browning died in 1926, the work was continued by W.S. Green. Finally, after taking into account the needs of all military branches, a finished design of the weapon was unveiled in 1933. Designated the M2 Browning HB (Heavy Barrel), the new weapon was an air-cooled, belt-fed design, firing from a closed bolt using a blow-back operation with short recoil. The rate of fire was between 450 and 600 RPM and the effective range was 2,000 yards, while the maximum range was over 8,000 yards, making it a powerful weapon. Indeed, nothing like it had ever been seen before and it was impressive. It weighed 84 lbs, which meant it had to be fired from a tripod and this pushed the weight up to 128 lbs. The overall length of the weapon was 5ft-5, with a barrel length of 3ft- 9. Such size limited it to a static role or mounted on a vehicle for mobility.

Licences to manufacture were granted to the Belgian company of Fabrique National (FN Herstal) and Colt, which produced the weapon for the US Navy. Since then, the weapon has been produced by numerous companies, including General Dynamics and Savages Arms Corporation.

The service history of the ‘50-cal’ is impressive and it has been used in every war since 1945, including WWII. It has been adapted for use on a range of vehicles, mounted on warships and fitted into aircraft from fighters to bombers. The B-24 was armed with thirteen 50-cals and the B-17 carried ten, while the B-25 ‘Mitchell’ carried up to eighteen, depending on the mission. The Mustang fighter carried six 50-cals with a total of 1,840 rounds. Tanks featured the weapon mounted coaxially with the main armament and some tanks had them mounted on the roof of the turret.

The weapon made a significant contribution to the ground war in all theatres of fighting, from tanks to Willys Jeeps and trucks such as GMC ‘Jimmys’, the 50-cal could be fitted to them all. Special ‘quadruple’ mounts were developed to allow four machine guns to be fitted on halftracks, with the combination being referred to as the ‘meat grinder’.

Different types of ammunition were developed, including armour piercing, high explosive and tracer to engage targets in the ground role and for anti-aircraft defence. The performance of the ammunition and the different markings has made it a popular choice with collectors who acquire variants to build up a display in connection with the weapon.

Weapon enthusiasts have plenty of versions to satisfy their needs, including naval variants, types used in different aircraft and the versions used by the Allied armies in WWII, including a special highangle mounting fitted with ‘counter weights’ to allow the gun to be depressed to engage ground targets.

Some traders offer 50-cals that have been ‘sectionalized’ for training purposes by the military and show all the internal workings and mechanisms. These have to be sold with a certificate of deactivation for legal purposes, but they look incredible and are fascinating to examine.

For re-enactors, the 50-cal must be the ultimate ‘must have’ weapon, because the M2 HB machine gun, with its history, can fit into any display or battle reenactment scenario set between WWII and the present day. That includes Vietnam, the Falklands War, Iraq and many other conflicts. They can choose between deactivated versions for static displays or for battle re-enactment, there are either blank-firing or gasfiring versions for authentic sound effects. There are replica versions of the M2 HB available, with an excellent copy complete with a tripod costing around £1,100. There are cheaper examples, but the quality of these is rather poor. It is a question of the better the quality the more you have to be prepared to pay.

The modern version of the 50 cal is the M2A1, a designation given in October 2010, and continues the service history of a remarkable weapon. New designs of ammunition have also been developed, including special anti-aircraft types such as the AN/ M2 and AN/M3, which can be fired at the rate of up to 850 RPM and 1,300 RPM respectively. The latest ‘ball’ or standard round fired by the M2A2 is the M33, which has a velocity of 2,910 FPS. Other types of modern ammunition include armour-piercing incendiary/ tracer and ‘Saboted Light Armour Piercing’ (SLAP), which is capable of penetrating 34mm of face-hardened armour plate at ranges of 550 yards.

It is now almost 90 years since the 50-cal first entered service and there is no reason why it should not remain in use. In fact, a quick glance at the list of armies currently using the weapon around the world is evidence enough of its popularity. Weapons come and go, but in this particular case, this is a weapon that continues to go on and is currently in operation with all branches of modern armed forces. From the extreme cold of countries such as Norway and Sweden to the dusty terrain of Afghanistan, it has proved to be a reliable weapon and as long as it can deliver it will remain in use. As for collectors and re-enactors, they are more than satisfied to have an interesting item with a remarkable service history that they can put on display.