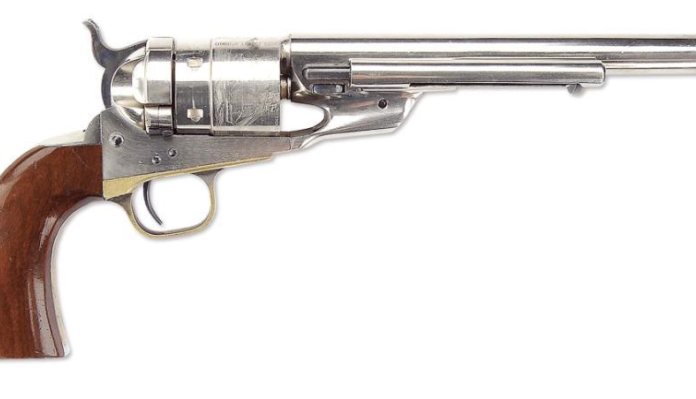 The savvy inventor will doubtless apply for a patent for his or her new idea, to protect it from being copied by those less inventive but just as capable of producing the product. Once approved, the patent will prevent others from legally copying the design for 20-years. Back in 1835, Sam Colt applied for, and was granted, a patent in Europe for his yet to be produced revolving firearms. Production began the following year in Paterson, New Jersey, by which time an American patent was also in place. At that time, the patent protected the inventor for 14-years. Early Colt percussion revolvers were stamped with COLTS PATENT on the left side of the frame but after 1869, when Smith & Wesson’s monopoly on boredthrough cylinders for breech loading revolvers ended, Colt began stamping the dates of patents on their pistols. At this time, Colt did not have a purpose-made revolver for metallic cartridges but began to alter many thousands of the percussion revolvers they had on hand. These ‘conversion’, along with the 1872 Open Top, their first attempt at a big bore cartridge revolver, served to keep them in the changing handgun market, while they designed and developed what was to become the standard side arm of the US Army for almost two decades – the Colt Single Action Army revolver. The pistol is still in production today with only very minor alterations from its inception in 1873.

Clones of the Colt SAA revolver, known by enthusiasts as the Peacemaker, are by far the most commonly used revolvers amongst aficionados of the American West, whether they are shooters or members of the re-enactment fraternity. While the basic shape of the revolver is easily recognisable regardless of the manufacturer of the reproduction, the attention to detail is what separates the good copies from the mediocre. The shape of the grip, hammer, trigger guard and front sight, either individually or in a combination of one or more, are what let down many of the players in the market. To be fair, a lot of the earlier copies were made when the needs and the demands of the customers were not as stringent as they are today. But the modern Westerner is much better informed and much more likely to insist on greater accuracy when choosing his (or her) equipment.

One area where the modern clones do not mimic the originals, is in the barrel markings. Although some early Italian Peacemakers had the Colt address rolled on the barrel, presumably Colt put a stop to it, as the practice seems to have disappeared. Likewise, the ‘Single Action Army’, followed by the calibre, does not appear on the left side of the barrel, probably for the same reason. But one set of markings from the originals has been copied on today’s reproductions and that is the abovementioned patent dates on the left side of the frame. Armi San Marco, Pietta and Uberti have all at some time stamped the frames of their copies of this icon, both as firearms and blank firers, with a set of these dates. Many shooters and re-enactors will doubtless have noticed these markings without realising their significance.

During the production of what are termed ‘First Generation’ Peacemakers (1873-1940) four different arrangements of patent dates were to be found on original Colts, covering four patents applied to the revolver. Some of these markings will be found on the many thousands of Colt percussion revolvers, both large and small, that were converted to fire metallic cartridges. The dates and serial numbers below are applicable to the stampings on the Colt Single Action revolver, or Peacemaker. Stamped on very low serial number pistols, probably as few as the first 25, is the first type of date stamp: PAT. JULY 25, 1871 PAT. JULY 2, 1872 From then up until 1877 or approximately serial number 33,000 the stamping was thus: PAT. SEPT. 19, 1871 PAT. JULY 2, 1872 The next variation, which ran until 1890 and approximately serial number 135,350, was: PAT. SEPT. 19, 1871 “ JULY 2, 1872 “ JAN. 19, 1875 The final configuration, used until production ceased at number 357,859 (the accepted production figure for First Generation guns), reverted to a two-line arrangement but with the three above dates: PAT. SEPT. 19, 1871 JULY 2, 72 JAN. 19, 75 This final setup is the one used on today’s Colts and is often seen on modern reproductions. So, we have four different patents mentioned for this revolver, two credited to Charles B. Richards and two to William Mason, and all assigned to the Colt’s Patent Firearms Manufacturing Company.

William Mason began his career as an apprentice patternmaker and by 1865 found himself employed by the Remington Arms Company. In November of that year he was granted a patent for a revolver with a swing-out cylinder and the star ejector system to eject spent cases. The design was used by Smith & Wesson in 1896 for their .38 Hand Ejector model revolver.

In 1866 he left Remington and began Work as Colt’s Armoury Superintendent, where, together with Charles Richards, he initiated the process of converting Colt percussion revolvers to accept metallic cartridges. By 1871 he was working on the Colt Model 1871-72, or ‘Open Top’, as we know it today. This was a purpose-built cartridge revolver, intended for submission to the Army. The Army rejected the open frame layout, so Mason quickly adapted the design to incorporate a top strap. Resubmitted for Army trials, the new revolver was approved in 1872 and the legendary Colt Single Action Army began its illustrious career. Mason left Colt in 1882 to work for Winchester and three-years later he became Master Mechanic for the company, a position he held until his death in 1913.

Charles Richards left private school and became an apprentice at an engineering plant before gaining employment with Colt in 1855, leaving after three years to become foreman at a company manufacturing steam valves. After the outbreak of the Civil war in 1861, he found himself again working for Colt, eventually reaching the position of Superintendent of Engineering.
His first major design for Colt was a conversion of the Model 1860 Army revolver to take metallic cartridges. Around 2-line 2 date marking 3-line marking 9,000 of the ‘Richards Conversions’ were eventually made. He teamed up with William Mason to improve these conversions – resulting in the ‘Richards- Mason Conversions’ – with the pair eventually working together to perfect the Peacemaker. The two men were also responsible for Colt’s large frame doubleaction Model 1878 revolver. Richards retired from Colt in 1880 to become a founder member of the American Society of Mechanical Engineers, serving as its vice-president from 1888-1890. He served as United States Commissioner at the 1889 Paris Exposition, an event that saw the unveiling of the Eiffel Tower. He died in Hartford, Connecticut in April of 1919.

We’ve seen the markings on the guns and met the men responsible, so now let us look at the patents themselves. The first date, July 25th, 1871, refers to patent number 117,461, granted to Charles B. Richards on that date. The inventor claims four specific areas for his patent: the slot in the end of the ejector tube; the flange on the ejector tube, which used the holes and recesses made for the percussion rammer and lever arm to attach it to the pistol; the projection in the recoil plate, which contained the firing pin; and a peculiar jointed hand to turn the cylinder. The first three items were used extensively on the conversion revolvers but this jointed hand never seems to have made it to production, as the next patent in the list negated its use.

US patent No. 119,048, also granted to Richards, on Sept. 19, 1871, was applied to the Colt House Pistol, also known as the Cloverleaf because of its unique four-shot cylinder. The particular parts covered by this patent were- the method for holding the ejector rod to the barrel; a small shoe to prevent cartridges or cases from falling out of the cylinder when the hammer is at rest or full-cock; and a hand with two teeth as opposed to the single tooth on the percussion series of pistols. It is this hand which is used in the Colt SAA to this day and to which the patent stamping on the frame applies.

The first Peacemaker-related patent granted to William Mason, on July 2nd, 1872, was No. 128,644. His claim was for a much simpler method of attaching the ejector tube to the barrel (used on the conversion revolvers) by fitting a stud on the tube, which in turn located into a hole in the barrel lug and was held in place by a screw entering from the opposite side. The second part of his invention, the one applied to the SAA and still in use today, was for the small offset in the slit under the tube. This slit allows the ejector rod to move rearwards to eject the empty cases and the offset at the front, in conjunction with the ejector rod spring, keeps the thumb piece, or head, held close to the barrel when at rest.

Mason’s second and final patent (No. 158,937) concerning the Colt SAA revolver was issued to him on Jan 19, 1875 and covers three features- the method for holding the ejector tube in place (a boss on the barrel into which a screw passes transversely through the tube, combined with a recess in the frame into which the rear of the tube extends); the arm on the loading gate, with two flats at almost right angles to each other, along with a spring in the frame which will hold the gate open or closed, depending on which flat is presented to the spring; and the ‘semispherical’ shape of the rear of the frame, with the loading gate contoured to match this shape.

So, there we have it, the combined talents of two inventive men, building upon the basis of Sam Colt’s 1851 Navy design to bring us one of the World’s most recognisable and enduring firearms, still being produced today over 140-years after its inception. The foregoing is only a brief summary of the patents mentioned. The full wording of each patent, along with a drawing, can be found in a number of Colt reference books, such as ‘A History of the Colt Revolver’ by Charles Haven & Frank Belden.
Finally, merchandise can often go on sale while the patent application is being processed, and when I was young I often wondered who this Pat Pending was whose name was stamped on goods!