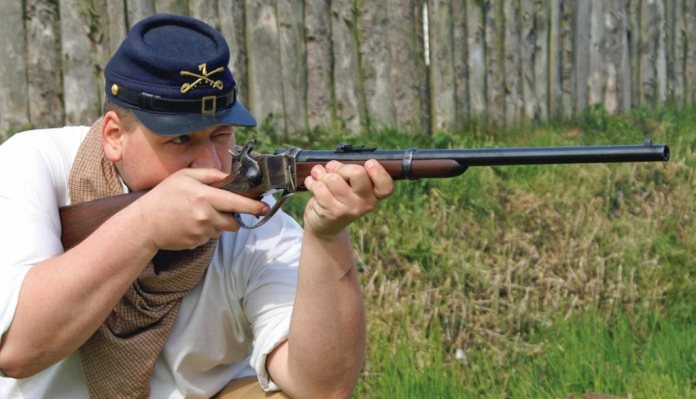 Mention the calibre .45-70 to modern Westerners and it is likely that the conversation will eventually turn to one, or both, of two subjects – buffalo hunting and the Little Big Horn. This old-time cartridge went some way towards the success of the former and failure at the latter.

Throughout history, one of the more positive results of wars has been the development and improvement in weaponry, and the American Civil War was no exception. For the most part during this conflict, the principal infantry weapons on both sides were single-shot, muzzle-loading rifles. Although several cartridge long arms, mainly carbines, had made their appearance in both armies, the resistance to change amongst the military top brass ensured that the Springfield, Enfield and such remained the mainstay of the foot soldiers’ armament. After the war, it became clear that cartridge arms were the way forward and the army had to admit that its muzzle-loaders were fast becoming obsolete.

While the self-contained metallic cartridge had seen a modicum of success between 1861 and 1865, it was usually in a comparatively lowpowered weapon, due to the weakness of the copper cartridge cases. Even though repeaters such as the Spencer and the Henry rifle had shown their potential with a high rate of fire, when the decision was made to introduce a cartridge rifle for the Army, a large calibre, single-shot model was the preferred choice. It would be 1892 before the Army adopted a repeating rifle, in the form of the .30-40 Krag.

As early as 1861 the US Ordnance Department was experimenting with breech-loading, single-shot rifles, based on conversions of existing percussion arms. It was not until 1865 that the final decision was made to adopt the ‘Trapdoor’ system designed by Erskine Allen and the first conversions, in .58 rimfire calibre, were built on the 1863 Springfield Rifle Musket. The following year, the calibre was reduced by over boring existing barrels and inserting a rifled liner to take a .50 calibre centrefire cartridge. Many thousands of this model were produced, in both rifle and carbine configuration. Then in 1873 the army adopted the Colt Single Action Army revolver in .45 Colt calibre and decided to standardise on .45 calibre for both handguns and long guns. That year saw the birth of the .45-70 Government cartridge and the introduction of scratch-built rifles and carbines in the new calibre, based on Allen’s trapdoor design. Over half a million examples were completed before the above mentioned Krag rifle became the standard issue.

The .45-70, like the rest of the Winchester centrefire black powder era cartridges, takes its name from the calibre of the bullet (in this case .45”) and the powder charge (70-grains). Its official name was .45-70-405, the latter number referring to the bullet weight in grains, or .45-70 Government. While 70-grains of black powder is reasonably comfortable to shoot in the 32½” barrelled rifle, it was found to be a little heavy for the carbine, which had a barrel 10” shorter. Thus the ammunition delivered to the carbine-equipped cavalry units had a decreased powder charge of only 55-grains. Coincidentally, this is close to the maximum amount of FFg black powder that you can get into a modern .45-70 cartridge case.

To keep costs down, new recruits were limited to the amount of ammunition that could be used in training, often resulting in inexperienced soldiers going into conflict. Special training ammunition was loaded with a lighter bullet and horses had to get accustomed to gunfire at close range so blank ammunition was supplied.

Very shortly after the army began to equip the troops with this new Springfield, other major firearms manufacturers saw the potential of this new cartridge in the civilian market and began to offer it in their products. First to take advantage was Sharps, whose 1874 model was to become a leading player in this market, albeit for only a short period. Around 1875, Remington added the .45-70 to its line of Rolling Block rifles and the following year the Ballard Pacific rifle joined the throng. Winchester’s first foray with this cartridge was in the Winchester- Hotchkiss bolt action rifle in 1879, and their single-shot High Wall model took it on board in 1885. Whitney was the first to offer this chambering in a lever-action rifle (1878 model), followed by Marlin in 1881 and Winchester in 1886.

At one time, the Winchester catalogue offered a large variety of bullet shapes and weights, from 330 to 500-grains, along with several powder charges for this cartridge. By lengthening the case, and therefore increasing the available capacity for larger powder charges, ‘new’ calibres such as the .45-90 and .45-120 were born, both of which are still offered today in reproduction rifles. Although the .45-70 was deleted from American rifle manufacturers’ catalogues in the 1930s, renewed interest in the American West has meant that this is another of the old favourites that have seen its popularity escalate over the last few decades. This in turn has resulted in the major Italian gun makers producing a good variety of reproduction rifles for this calibre, both as single-shot models and lever-actions. These latter variants, and Uberti’s 1885 Model, will usually be copies of early Winchester products and fitted with that company’s crescent-shaped butt plate. While these are pleasing to look at, they can be rather brutal on your shoulder with heavy loads and the shotgun-style butt will prove more comfortable for extended shooting of this calibre.

Today the .45-70 is one of the most popular cartridges for target events such as silhouette, Creedmoor or steel gong and buffalo matches. Whilst in its black powder configuration it is relatively weak by modern rifle standards, with the original military loading said to deliver around 1300 FPS at the muzzle, it is still a capable performer. However, current production rifles can handle much hotter smokeless loads which can ring the steel plates out at longer distances.

It is so popular that there is an abundance of reloading components available for it, and it is certainly one of the easiest to load. The original ‘balloon head’ cases, in which the head was formed from thin, folded copper or brass, could accommodate a load of 70-grains of black powder but their inherent weakness, head separation, led to the introduction of the solid head design that we know today. This stronger construction led to a reduced capacity and today’s cases in this calibre will only take around 65-grains of FFg powder, depending on the bullet design.

Loading Winchester cases with 55-grains of Henry Krank’s black powder and adding a lubricated wad between the powder and a 405-grain lead bullet, gives just about the right amount of powder compression necessary in black powder cartridges. I have used this load in an original Springfield trapdoor rifle as well as a modern Pedersoli trapdoor carbine and it is a pleasure to shoot in both instances. The choice of off-the-shelf bullets here in the UK is somewhat limited but for those wishing to cast their own, there is a good variety of moulds available.

If you choose to take the smokeless route, there is a wealth of loading data available from all of the powder manufacturers. Brand loyalty, and to a lesser extent, powder availability, may play a part in your choice of load, particularly now that we have lost a number of American powders through not being REACH compliant. If you are shooting an older 19thcentury rifle, you should check that it is up to the loads that you intend to use and if necessary, send it for proof testing before use. Matching the serial number of the rifle against manufacturers’ data will usually enable you to determine if the rifle is suitable for smokeless or black powder only loads.

As a rough guide, anything made post-1900 should be able to take lowpowered smokeless loads, but please check first. If in doubt, keep to black powder loads only, and even then only after a competent gunsmith has examined the gun. Some loading data for this cartridge is divided into groups for different action types, ranging from the weaker, such as the Springfield, to strong models like the Ruger No.1 or No.3. The Ruger’s should push a 400-grain bullet out at around 2,000 FPS with an appropriate powder charge and comfortably withstand the accompanying pressure. Once again I can recommend no better source of information than www.ammoguide.com which, at last count, listed around 140 loads for the .45- 70 Government cartridge, although you do need to be a subscriber to view them.

Many of the old Sharps, Remington, Springfield and Winchester rifles that were originally chambered for this cartridge have been reproduced by the various Italian firearms manufacturers, along with a modern interpretation from Ruger. This means you should have no difficulty finding a gun that suits you, should you decide to add a gun of this calibre to your cabinet. If you do take the plunge, you owe it to yourself to try, at least once, using black powder.