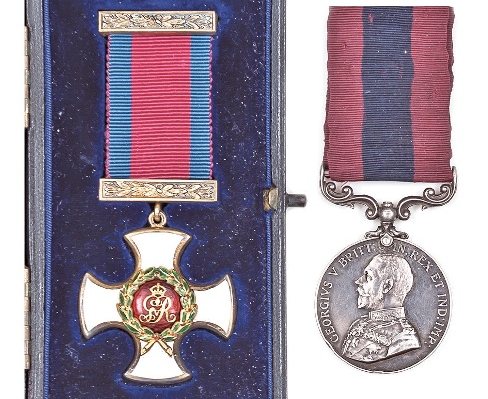 Note: DCM London Gazette 13.2.1917. “For exceptional general efficiency and for conspicuous good work and devotion to duty during the evacuation of wounded from an advanced dressing station, where he was compelled by circumstances to take command.”

Now we move on to badges with this scarce WWI Other Rank’s brass cap badge of the 1st Armoured Car Battery. It sold for £90.

A Victorian officer’s helmet plate of The Connaught Rangers, silver-plated centre badge and title scroll, blue cloth binding. It retained some original gilt and sold to a commission bidder for £360.

Last is a post-1902 officer’s helmet plate of The Royal Irish Regiment, silver plated centre badge and title scroll, red cloth backing. It retained a little original gilt and sold to the same commission bidder for £300.

Now we have a couple of edged weapons starting with a Third Reich 1933 pattern SS dagger, by Rich. Abr Herder, Solingen, with nickel silver mounts, the crosspiece stamped ‘II’ (Dresden inspection mark), in its anodised sheath. It was a generally untouched example (minor bruising to grip, some light wear to sheath). It sold to a bidder in the room against several other bidders for £1500.

A good Victorian bowie type hunting knife, the double edged 111⁄2-inch long blade with full length fullers, marked ‘CIX, Ferraby & Hare, Hull’, the hilt with steel crosspiece and one piece ivory grip engraved with crowned family crest (very worn), the pommel in the form of the head of the Duke of Wellington. It went to a bidder in the room for £500.

It is rare for an ordinary copper powder flask for a sporting gun to make more than £40 or £50. However this was no ordinary flask, for it was covered all over in fine wicker weave, which was in excellent condition. Illustrated in Riling (R1195), it was 8-inches long and was made by Hawksley, with patent top, the charger from 21⁄2 to 3 drams. It sold in the room against stiff competition for £290.

Now we move to antique firearms with this brass barrelled flintlock blunderbuss, made circa 1820. The two-stage bell mouth barrel 133⁄4-inches long, the octagonal breech with Birmingham proofs and engraved ‘London’, the flat stepped lock with safety bolt and roller on frizzen spring, the plate engraved ‘P Day’. The hammer fell to a commission bidder at £1800.

A .577 Snider Mark II carbine in superb condition would make a very good shooter if bought by a black powder enthusiast. The barrel measured 191⁄2-inches and it had almost flawless three-groove rifling, the lock marked with crowned ‘VR’ and ‘1867 Enfield’. The stock had been cut down to half with a single barrel band and the butt had a good clear Enfield storekeeper’s mark. The butt plate tang stamped ‘108/ CC/ 1’ (Cape Colony). It was all in crisp condition and after much bidding finally sold to a telephone bidder for £500.

An obsolete calibre rifle proved popular. It was an 1893 Marlin Safety full tube magazine underlever rifle in 32 to 40-inch calibre. The octagonal barrel was 261⁄4-inches long, with address and patent dates on top flat, and ‘Special Smokeless Steel’ on the left side, with ratchet rearsight and blade foresight, number 184157. It sold for £600 to a room bidder.

Finally we show a good brace of brass framed percussion boxlock sidehammer belt pistols. The first with 41⁄4-inch octagonal barrel of 22-bore, engraved ‘Witton Daw & Co, London’, the second with 4 3/8-inch barrel of 28-bore, engraved ‘Witton Daw & Co, London’ on the top strap of the frame, both were Birmingham proved, with scroll engraved frames, chequered butts with vacant escutcheons and steel butt caps with hinged traps. They had colour hardened barrels and hammers, and blued trigger guards and belt hooks (there were differences in the engraving of the frames, trigger guards and buttcaps, also the chequering of the butts and the shape of the escutcheons). They came in a well-fitted green baize lined mahogany box, containing accessories. They sold to an Internet bidder for £2000.

With a total return of £602,646 and a very positive 86% sell through of 415 fine Lots, this was a highly successful sale of fine arms and armour.

The top 10 lots comprised of:

Lot 413: A fine and rare cased pair of 28 bore French silver-mounted flintlock pistols of presentation quality by Boutet, which sold for
£57,600.

Following the sale, Auctioneer and Expert-in-charge, Thomas Del Mar, commented: “Following closely on the heels of the remarkable success of the Higgins Armory auction in May we were delighted with the result. The auction included two further institutional properties, from The Metropolitan Museum of Art and the Art Institute of Chicago that were both 100% sold. The sale also included the second and final part of the Stern Collection that was well received. The highlight of the day was the Boutet pistols from the descendant family of the Viceroy Peru, achieving £57,600 to a private collector.”