A fine Pair of replicas 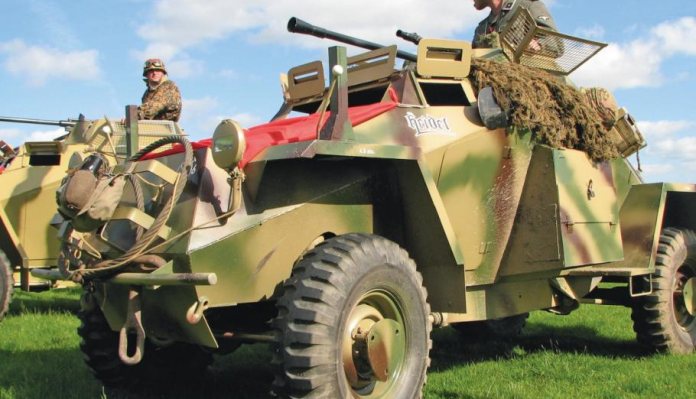 Live-action battle re-enactment displays are a feature of many events. These depictions of battles are popular from all periods, but especially so from WWII, with all the vehicles, artillery and machine guns adding to the drama. The coordination and planning of these displays has to be done with the utmost care, particularly when they involve the movement of vehicles. The end result can be like watching a war film, but in realtime with all the smells and noises thrown in.

For authenticity, the coordinators like to include a wide range of vehicles, from motorcycles to tanks. Some vehicles are genuine, such as the M4 Sherman tank, because thousands were produced and they are plentifully available to private owners. German vehicles are arguably the most interesting to visitors but they are also the hardest and most expensive to obtain, because not many survived the war intact, plus production never matched that of the Allies. These problems have been solved by creating passable replica copies which are good enough to be used in films and battle re-enactment displays.

These reproduced German armoured vehicles include a type that is known as the ‘StuG III’, built from former British army APCs, and other designs from Panzer III to Tiger tanks have been produced in a similar way. Even wheeled armoured cars, such as the SdKfz247, have been recreated to take their place in the display arena. All German armoured vehicles, both wheeled and tracked, were given a unique ‘Sonderkraftfahrzeug’ title which was abbreviated to ‘SdKfz’ to identify it as a special purpose vehicle. Two such vehicles were the SdKfz222 and SdKfz223 armoured cars, both built between 1935 and 1943, with a combined production run of around 2,000 vehicles.

The long and diverse service history of these vehicle designs makes them popular with reenactment groups, allowing them to depict German units at any time during the war. This means they can be incorporated in displays from the Polish and Dunkirk campaigns to Normandy, Arnhem and even the Russian Front. Recreated versions of these armoured cars are usually based on the chassis of modern 4X4 vehicles, such as the Land Rover 110 and Range Rover. However, any suitable chassis available will work just as well. Using specifications from reference works, metal plates are attached to the chassis set at the correct angle and welded together to produce the superstructure. The result is the closest thing to the original anyone is ever likely to see outside a museum and almost certainly never an example being driven.

The SdKfz222 was designated as a Leichte Panzerspahwagen (light armoured scout car) and was armed with a 2cm cannon in a turret and an MG34 co-axiallymounted machine gun, for which 180 rounds and 1,050 rounds were carried respectively. The SdKfz223 was also designated as a light armoured scout car, but being equipped with long-range FuG10 radio equipment and Funksprechgerat (radio-telephone equipment) it functioned as a specialist communications vehicle. The 223 was armed with an MG34 machine gun, carrying 1,050 rounds, for use in self-defence. The two versions operated in the reconnaissance role at all levels, with units such as the Grossdeutschland, relaying back information on enemy activity.

Apart from the turret mounted on the SdKfz222 version, which increased its height, the vehicles were virtually identical, both measuring 15ft-9 in length and 6ft-5 in width. They were produced by the same factories, which included Bussing-NAG, MNH and Weserhutte, and both were fitted with either a Horch 3.5 or 3.8-litre engine. This gave them a top speed of 50mph on roads and 25mph cross-country, with an operational range of over 180 miles. The armour was 8mm thick, to provide some protection against small arms fire and was set at varying angles, depending on the part of the vehicle.

When replica examples of these designs take part in a battle re-enactment their presence adds to the display by showing something different. To increase the effect, sometimes members of a group will sit on the vehicle to ride into action, giving a very dramatic and very realistic impression. Not all replicas will be exact down to the last inch, but certainly close enough to pass for what they are meant to be. If the machine guns and 2cm cannon are blankfirers or gas-operated, when they are fired the effect makes it that much more authentic.

In the case of the SdKfz223 version, it attracts a lot of attention with its collapsible radio aerial, a design sometimes referred to as ‘bedframe’ because of its unusual appearance.

As part of the line-up participating in a battle reenactment scenario, it is possible to show how these vehicles would have been used for reconnaissance, entering the arena before the replica Panzer III tanks or StuG III ‘Assault Gun’. They certainly add an extra touch to the display, especially if they are ‘rigged’ with pyrotechnics to produce a flash and lots of smoke to simulate being hit by an anti-tank gun, which always thrills the crowds. After the action, the vehicles park up at the group’s static display area and here, they continue to attract attention as they are photographed.

Examples do exist in museums around the world, from America to Russia and France, but it is those replica versions that allow such rarities to be seen in action. The owners and teams of engineers who recreated the vehicles will admit that some allowances had to be made, such as the position of the engine, but with the addition of other details such as tools and towing cables, the effect is good. Some owners have painted names on their vehicles, a feature which is seen in original wartime photographs used as reference sources.

If either an SdKfz222 or SdKfz223 appeals to someone looking to acquire an example of one of these vehicles, then ready-built replicas do occasionally come up for sale on specialist websites. A search on the internet will turn up something and the price paid will depend on the condition. One specialist site to investigate is www.sdkfz222.com, which has various pages on subjects connected to the vehicles, including original photographs, film clips and unit histories of use during the war. The site operator is also on Facebook and offers 1:1 plans for those who would like to build their own example of either vehicle. These replica versions are one way of expanding the number of German vehicles pitted against Allied vehicles and balance out the odds to present different scenarios to fit in with a battle re-enactment display that might be commemorating a particular action.