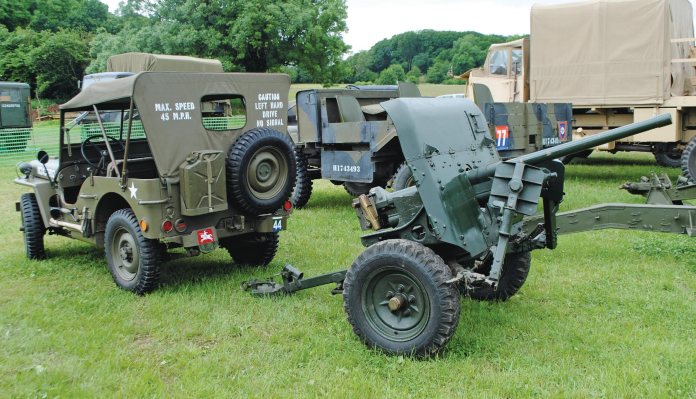 When the tank was introduced during the First World War, it sparked an arms race to produce effective anti-tank (AT) guns. Development for these weapons continued to spiral after the war as new tank designs were being challenged by guns with calibres between 37mm and 47mm. Compared to later designs these were lightweight, but at the time they were considered to be capable of dealing with tanks designed in the 1930s. The fact that tanks would become heavier and more powerful did not seem to occur to many people.

We’ll take that one

The British army was among those searching for an effective anti-tank gun and by 1934 it thought it had found what it was looking for in the Vickers- Armstrong design, known as the Ordnance QF 2-Pounder. The QF standing for quick firing and the weight referred to the 40mm calibre projectile. Firing trials were conducted, which resulted in the gun being accepted into service for the British army in early 1936. However, it would not be until 1938 that the first units began to receive the new weapon, to allow training in its handling.

Unfortunately, like similar weapons at the time, such as the German 3.7cm PaK36, it suffered from a handicap. The problem lay with the ammunition, the effectiveness of which fell off dramatically at ranges beyond 500 yards. Despite that, the weapon was considered by many at the time as the outstanding anti-tank gun of its type and would be used in most theatres of WWII, including the Far East. Here, it remained useful against the lighter Japanese tanks and was used to ‘snipe’ at Japanese positions, which were often well sited and well protected.

The 2-Pounder gun was mounted on a two-wheeled carriage and with an all-up weight of just over 1,800 lbs, it could be towed by light vehicles such as the American-built Jeep. It measured 13ft-3 in length, 4ft-7 in height and just less than 6ft in width. It was produced between 1934 and 1944, during which time some 34,000 guns were built, with examples being sold to the armies of Australia, Spain, the Republic of Ireland and Belgium.

Usually served by a crew of five, it could be operated by three men. When deployed for action the wheels were removed from the carriage, which lowered the silhouette and allowed the gun to be traversed a full 360° on its tripod base fitted with hinged legs, which could be adjusted to suit uneven terrain. This provided a stable firing platform and allowed the crew to traverse and follow a moving target. In this firing position, the weapon had a range of elevation between -13° and +15°.

The breech mechanism of the 2-Pounder was a vertical sliding, semi-automatic type, that allowed the crew to achieve a high rate of fire of 22 rounds per minute. In practice, however, the gun would never be fired so fast and certainly not when engaging moving targets. It was equipped with the type No 24B 2X telescopic sight, which was an excellent optical unit giving good target engagement even in low light conditions and made aiming relatively simple.

Originally, it had been intended to equip infantry units with the new AT gun to give them their own anti-tank capability. However, the powers that be had different ideas. They believed that the Royal Artillery should be responsible for these specialised weapons and form anti-tank units for this purpose. In 1939, the Royal Artillery was divided into three separate and quite distinctive elements, including the Field Artillery, which was responsible for anti-tank, field, medium and heavy guns. As part of their structure, each infantry division of the British Army included an anti-tank regiment of Royal Artillery, which was divided into four batteries, each equipped with twelve 2-Pounders, to give a compliment of 48 guns.

The type of ammunition fired by the 2-Pounder was known as ‘fixed’, which means that each round came complete with the projectile fitted to the cartridge case, which contained the propellant. This is the same as a rifle bullet, but in this case much larger with a calibre of 40mm and measuring 304mm in length. There were six types of ammunition developed in the calibre but only four were normally fired by the new AT gun. Two of the main types fired were the Armour-Piercing/Tracer (AP/T) Mk I and the Armour- Piercing High Velocity/Tracer (APHV/T). Each complete round weighed 4.5lbs, and the projectile weighed 2.4lbs. The Muzzle velocities were 2,600 FPS and 2,800 FPS, respectively. The AP/T penetrated 49mm of armour at 100 yards and 27mm at 1,000 yards, while the APHV/T penetrated 62mm of armour at 100 yards dropping to 38mm at 1,000 yards.

The third type of round was the Armour- Piercing Capped Ballistic Cap/Tracer (APCBC/T) Mk I, which was another solid-shot AP round. It had a muzzle velocity of 2,600 FPS and could penetrate 73mm of armour at 100 yards, dropping to 57mm at 1,000 yards. Finally, the High Explosive-Tracer (HE-T) Mk II shell, which included a projectile with a filling of Lyddite weighing 1.9lbs. This round had a muzzle velocity of 2,600 FPS and was used against ‘soft’ targets such as troops or trucks in the open or against machine-gun positions. Collectors are interested in acquiring examples of 2-Pounder ammunition, especially the types used with the Littlejohn adaptor, to add to their displays. There were two types of ammunition developed for use by tanks fitted with the adaptor known as the ‘Littlejohn’, which was designed to increase muzzle velocity and penetration.

These rounds were Armour-Piercing/Core Non-Rigid (AP/CNR) Mk I and Mk II. They had muzzle velocities of 4,200 FPS and 3,900 FPS respectively and the adaptor was for use with the 2-Pounder guns fitted to tanks such as the Matilda, Cruiser MkVI and later the ‘Tetrarch’ light tank, intended for airborne operations. The device was not popular and more often never fitted.

In 1942, the Australian army successfully mounted a 2-Pounder on the Universal ‘Bren Gun’Carrier, but it was never pursued to operational use. In North Africa, the British army loaded the AT gun onto the cargo decks of trucks in a style known as the ‘portée’ role, for transportation over rough ground. In an emergency, the gun could be fired from this mounting.

The first combat use of the 2-Pounder gun by the British army came in May 1940, when the German Army launched its Blitzkrieg westward. During the fighting, the AT guns claimed many targets, mainly armoured cars and light tanks, but against heavier, more modern types they failed. All heavy equipment was abandoned by the Allies evacuation at Dunkirk, from which the Germans retrieved what they could use, which included the serviceable British and Belgian 2-Pounder AT guns, which the Germans used as the 4cm PaK192(e) and 4cm PaK154(b) respectively. When fortifications were being constructed in Britain to counter a possible German invasion, many defences included 2-Pounder guns as part of their armament.

Today, not many examples of 2-Pounder AT gun exist outside of museums, which limits them from being used in re-enactment displays. There are some privately owned examples and these sometimes make appearances at events, which gives enthusiasts and collectors a rare treat. Otherwise, they are most often seen in museums such as the Muckleburgh Military Collection (www.muckleburgh.co.uk) at Weybourne Norfolk, which shows one of the guns mounted ‘en portée’ on a Canadian-built Chevrolet V8 truck. Except for use during the Arab-Israeli War of 1948, it never enjoyed postwar service, unlike its heavier 6 and 17-Pounder counterparts. Unfairly overlooked, the 2- Pounder nevertheless, remains an important step in the development of anti-tank weaponry.