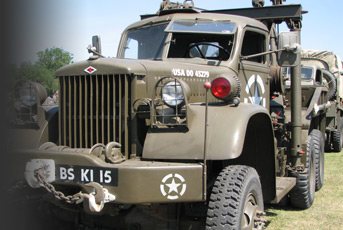 During the Second World War the US Army developed a range of vehicles known as ‘Wreckers’, which is a bit of a misnomer, as they were actually used for the recovery of damaged vehicles and for lifting heavy loads using on board cranes. One particular design of this type was the Diamond T 969 Wrecker truck which was also built in two other versions known as A and B .The vehicle was basically a standard truck body as built by the Holmes Company but which was configured to the role of recovery or ‘Wrecker’ truck. It initially entered service with the US Army in 1941, having been designed and developed in 1939, but later it went on to be used by the British and Canadian armies too.

The overall length of the Diamond T 969 was 292 inches, 101 inches in width and 111 inches in height to the top of the driver’s cab. It was a heavy vehicle weighing 9.6 tons (21,700 pounds) and it had to be in order to deal with the heavy duties it was expected to cope with. It was fitted with a Hercules RXC six-cylinder 8.7 litre side-valve engine rated to 131bhp mounted to the front and covered with a curved bonnet which was distinct from other Wrecker designs.

It had a five-speed gear box with a two-speed transfer which allowed road speeds of almost 40mph which was sufficient to move in convoy. The front set of wheels were basic truck wheels with the two sets of rear axles fitted with double wheels for better load carrying. It had a fuel capacity of 50 gallons and this allowed an operational range of over 130 miles -which for owners today can make be going to events expensive. It was never intended for the vehicle to operate off road but sometimes conditions were bad due to natural causes - or artillery - and the 969 could cope with rugged conditions and could wade through water obstacles up to 24 inches in depth.

The first version of the 969 to enter service was the closed cab type, but after 1943 the open cab version, which was actually a canvas-topped model, was introduced. These were also built in the variants known as the 969A and 969B. The first production vehicles in the 969 range had been built using civilian components but later it was decided to change over to military standard components which would become the standard 969A. The 969B version was the design supplied to overseas armies and was not used by the US Army. However, they did retain certain distinguishing features such as the drop down tail gate and the ‘rounded off’ mud guards over the front wheels. One in four vehicles were fitted with an M36 ‘race-ring’ mounting on top of the cab so that a .50 inch calibre machine gun could be fitted to provide self-defence against low flying aircraft and as protection in case of attack by ground troops.

Mounted on the rear of the vehicle was a Holmes W-45 crane with a twin boom design with each one rated for a five ton lift capacity giving a combined lift capability of ten tons. This was useful for many duties, including being used to lift disabled aircraft onto trailers for removal. A large number of 969 vehicles were fitted with front-mounted winches which were useful for recovery duties where a vehicle had simply skidded off the road and were stuck. The winches were rated for 6.6 tons (15,000 pounds) and could haul damaged vehicles into a position where the vehicle’s on-board crane could be used to either lift it onto a recovery trailer or tow it away for repair. The vehicle could tow loads of over eleven tons (25,000 pounds) which meant it could cope with all but the heaviest armoured vehicles.  It was equipped with a range of tools and equipment to allow the crew to complete vehicle maintenance in the field and this even included an air compressor for the workshop

In post-war years the 969 was used by a number of European armies including the Danish army which had the 969A version in service in the 1950s.Today Diamond T Wreckers make appearances at military vehicle events and a single well equipped vehicle with all its kit laid out makes for a display on its own. Sometimes owners will get together to present a life size diorama with the Wrecker appearing to be in the act of recovering small vehicles.

So, what will a Diamond T 969 set you back if you were in the market to buy one? Well, like any other type of vehicle it all depends on condition. They are popular vehicles to have because they can be driven on the road and as such can be insured through specialist brokers such as Adrian Flux (www.adrianflux.co.uk).