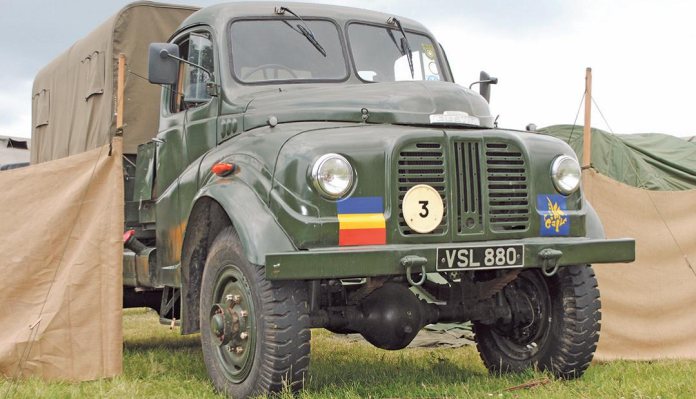 The Austin Motor Company Limited, based at Longbridge, Birmingham, was established by Sir Herbert Austin in 1905 and within a year was producing commercial vehicles for the civilian market. On the eve of the First World War the company employed 1300 workers and produced 1500 cars annually. During the war the company expanded and produced aircraft, ammunition and weapons along with 1600 trucks in the three ton range. The workforce also expanded to 20 times its size to produce other trucks from 1.5-ton to five-ton range.

During the inter-war years Austin returned to manufacture cars, but on the outbreak of the Second World War the company quickly returned to war production. The company produced the famous Lancaster bomber and also developed a range of trucks termed the ‘K’ series which included the K2 which was developed into an ambulance version. The K3 was a utility truck used extensively in North Africa where it was used for transport and even carrying anti-tank guns in the ‘porteè’ role.

After the war the company continued to produce trucks in the K series and in 1952 launched the K9 series which was designed to replace the ageing fleet of .75-ton vehicles, some of which had been in service since the Second World War. In the end, the series was to prove versatile with a long service life. The K9 was developed from the civilian design called the ‘Loadstar’ and proved ideal in the military role. It was a 4X4 rated at one-ton and proved capable of being adapted to many roles from ambulance to specialist technician vehicles.

Used by the British Army and Royal Air Force, but not the Royal Navy, the most numerous types of the K9 were the signals versions. These were all based on the E Type Body Mk 3 and in all there were some 18 different versions of the vehicle with a production run which ended in 1955, by which time over 9500 vehicles had been built.

The basic version measured 17- foot 4-inches in length, 7-foot 3-inches in width and 8-foot to the top of the drivers cab. Height to the top of the canvas rear cover was around 11-foot 5-inches with a wheelbase length of 137-inches (11-foot 5-inches). The K9 weighed 3.1-tons unladed and with a fuel capacity of 20 gallons it had an operational range of 310 miles at an average speed of 27mph. The vehicle was fitted with an Austin petrol engine ‘High Speed’ Series 2 six-cylinder of 3995cc which developed 92bhp at 3000RPM.

The K9 design was designated the FV1600 series, with each variant being given an end number. For example, the first variant was used as a troop carrier for the army and designated as the FV16001, which could carry an infantry section with weapons and equipment. Other variant examples followed, such as the FV16002 which had the title Cargo/FFW which stood for ‘Fitted For Wireless’.

The FV16003 was known as ‘Wireless Light’ and the FV16004 was the Radio Repair Van while the FV16005 was an ambulance version. Several more signals versions followed and a number of specialist variants. These signals vehicles were fitted with a range of equipment which could be replaced by newer, more modern radios. Signals versions of the K9 were distinctive by having a large ‘box-like’ body which gave them the appearance of being large vans. The FV16008 and FV16009 were water tankers for the RAF and Army respectively, which could be used to supply water for fire appliances or to decontaminate areas where spillages of fuel had occurred. The FV16010 was equipped to undertake welding to repair vehicles in the field or as mobile workshops by the RAF. A specialist vehicle carrying radar calibration equipment was termed the FV16011 and this was used by both the RAF and the Army. The FV16012 was another cargo vehicle whilst the FV16013 was an ambulance and crash rescue vehicle which would have been more suited for the RAF on airfields. The FV10014 and FV16015 were both signals vehicles and the last remaining three variants were specialist test vehicles. The FV16016 was a sensitivity test vehicle, FV16017 a ‘Test Vehicle’ and, lastly, the FV16018 was a missile test vehicle. These three vehicles would have carried highly-trained crews to operate the technical equipment for their roles.

The K9 series was designed to augment other vehicles such as the Austin Champ and the Leyland Martian, before being replaced by the Land Rover series from the 1960s onwards.

Despite the new and modern vehicles entering service the K9 remained in use with reserve forces of the British Army and the last examples of the Austin were finally declared obsolete in the 1980s. Today examples of the K9 can be found in private ownership and displayed at military vehicle events. Usually they are the signals version, but just occasionally an alternative variant, such as a workshop vehicle, does turn up.

As restoration projects, K9s turn up in some of the most unlikely places, such as barns or fields on farms, and these can require considerable work on the engine, chassis and bodywork. Fortunately there are still good stocks of spare parts which are available through specialist websites or from dealers at a vehicle show. Owner’s manuals and other items can be obtained to help in restoration projects and the finished work can be driven on the road.

Vehicles already restored can be purchased at reasonable prices and it is worth looking at these. The service history of individual vehicles can be researched, such as the example seen here at Graham Adlam’s Battle of Britain event at the end of September last year. By using the army registration number ‘38BG14’ the owner has been able to establish that it was used by the 37 Signal Regiment (V) of 2 (National Communications) Signal Brigade until 1980. It was sold in 1982 by the Vehicle Disposal Depot at Ruddington, near Nottingham, and the current owner has it listed on the K9 owners register at: www.austink9.webs.com.

There are forums for K9 owners on the internet to allow an exchange of views and information and these are worth looking at for anyone considering buying a K9 truck. The vehicle has an average rate of 15 miles per gallon as fuel consumption and when attending a show for the weekend everything can be packed into the rear. As a first ex-military vehicle to own, driving a K9 is a good way to begin.