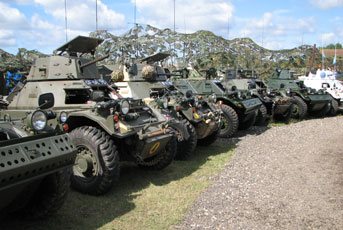 With a turning radius of less than six metres the tiny 4X4 FV701, better known as the Ferret Scout Car, is a popular vehicle with military armour enthusiasts.  It is compact, with the Mk1/1 measuring only 3.835metres in length, 1.905m in width and 1.448m in height and with a combat weight of just 4,210kg it is ideal for parading at most vehicle shows.

The British army used the Ferret wherever troops were deployed including Northern Ireland during the ‘Troubles’, Germany and Belize, before being withdrawn from service in the 1980s.

For the most part as a scout car the Ferret was only armed with a .30 inch calibre machine gun for self-defence but some variants were equipped to carry multiple machine guns and even wire-guided anti-tank missiles such as the Vigilant and Swingfire. The vehicle went through a number of changes and modifications during its service life and resulted in just over 4,400 being built in nine marks. A number of sub-models were also developed in a production run which lasted from 1952 until 1971, and the vehicle proved so versatile that some remained in service with a few overseas armies well into the 1980s.

Armour thickness varied across the vehicle from only 6mm on the rear of the hull to 16mm on the front, round the sides (and the front of the turret to those vehicles fitted with one).

The prototype of the Ferret was produced in 1949 by the Coventry-based Daimler Company which designed the vehicle following requirements set out by the British army. Full production got underway in 1952 with the first vehicles entering service and several armoured regiments quickly converted to the new vehicle. The Ferret has an all-welded monocoque construction and depending on the type it was operated by a crew of either two or three men. All versions were fitted with the Rolls-Royce B60 Mk6A, six-cylinder in-line water-cooled petrol engine mounted at the rear of the vehicle, which developed 129bhp at 3,750RPM to give road speeds of up to 93km per hour.

The Mk1/1 FV701 had a combat weight of 4,210kg and was armed with a light machine gun for which 450 rounds were carried. It was an open-topped design but a canvas cover was provided to afford the crew some shelter. The Mk1/2 was designated FV704 and was slightly heavier and had a higher silhouette. The next variant although given the term Mk2/2 was really only the result of a modification comprising an extension collar between the top of the hull and the turret. The work was carried out ‘in field’ in the Far East and it was never produced in large numbers.

The Mk2/3 version was a ‘high-tech’ reconnaissance vehicle being used to mount the ZB298 surveillance radar used by the British army and gave the system mobility. This battlefield radar equipment could give information reports on targets beyond the visual range so they could be engaged by either mortars or artillery. The vehicle had a hand-operated turret mounting a .30 inch calibre machine gun, which could elevate to +45 degrees and depress to -15 degrees and with full 360 degree traverse. A total of 2,500 rounds of ammunition was carried which allowed it not only to defend itself in an emergency but also to provide fire support if called on.

The Mk2/6 was heavier than any previous variant of Ferret, due to the fact that apart from being armed with a .30 inch calibre machine gun the vehicle was fitted to carry launchers for the Vigilant wire-guided anti-tank missile which it carried either side of the turret. The Vigilant missile weighed 14kg and could engage main battle tanks out to a maximum range of 1,350m and destroy them with its shaped-charge warhead of 5.2kg.

Another missile-carrying version was the Mk5 Ferret, given the designation FV712, was armed with the Swingfire wire-guided anti-tank missile, but only around 50 of these were ever developed for sole use by the British army. The Mk5 was the heaviest variant of the Ferret range, weighing 4,980kg empty and 5,980kg fully ready for combat, and although speed was reduced to 80km/h it still had a good road performance.

As a Collectable or Display Vehicle

The Ferret has a fuel capacity of 96 litres to allow an operational range of 300km and even with the rising cost of petrol this is still quite economical to drive to events. Owners sometimes drive their vehicles at events given demonstrations of its handling ability and how it can ford water obstacles with depths over 900mm, cope with vertical obstacles up to 400mm and cross ditches of 1.22m in width with the aid of channels carried on the vehicle.

Today there are many Ferret Scout Cars in private ownership, so much so that the vehicle enjoys a truly international following with owners registered in the United States, Germany, Poland and several other European countries including Britain where the owner of a Ferret has established an ‘Owner’s Register’ which can be found at: www.ferret-fv701.co.uk

This has comments, photographs of restoration and some background history of the vehicles including service details in some cases. These vehicles are often taken to meetings where they are driven in mobility displays.

Want To Buy One?

Ferrets are popular vehicles being small and easy to manage. They frequently come up for sale either privately or specialist auctions and even on E-Bay! The price does vary according to the variant but it is more dependent on the condition. Prices can start at around £4,000 and go up the better condition the vehicle is in.

For example, Manby Motorplex, Manby, near Louth, Lincs. LN11 8UZ recently sold a Ferret Mk1/2 which had an asking price of £4,000 and was in need of some attention. Manby which can be contacted on 01507 328855 also operate off-road driving experiences and have other ex-military vehicles for sale which can be good for training in controlling vehicles such as the Ferret.

We contacted Gerry Wadman of Sussex Sports Cars who informed us that they currently have a Mk2 Ferret dated 1958 for sale in very good condition for £12,950. They can be contacted by telephone on 01273 477778 or Website at www.sussexsportscars.co.uk
We are informed that test drives can be arranged and you will be covered by insurance during the test drive. Other specialist sites such as www.selectmilitaryvehicles.co.uk based in Rossendale, Lancashire have a range of Ferrets available for sale including Mk 1/2 and the Mk V which was the Swingfire launcher version.

Insurance can be arranged through specialist brokers such as Adrian Flux or by visiting www.cherishedvehicleinsurance.co.uk/military-vehicles-insurance which supports the Military Vehicle Trust (MVT). Just a word of caution, though, if searching for a Ferret to buy through the Internet, please include ‘scout car’ otherwise you could end up looking at small furry animals…